Text and Photos by Rob Butler

In 2015, I flew to Ecuador, boarded a motorized canoe with a group of friends, and three hours later disembarked at a riverbank dock from which a boardwalk led us to a lagoon. There, guides and canoes awaited to take us to a rustic lodge immersed in Amazon biodiversity. Over the following few days, I felt my life adjusting to nature’s clock. Routines became scheduled around the circularity of natural cycles of daytime heat and evening thunderstorms. I had experienced similar feelings in wild places elsewhere in the world and was enjoying the restorative time amid nature.

Experience with nature lives beyond words, and many people with experiences similar to mine have struggled verbalize their feelings. My friends in the Amazon were calmer and smiled more often. Some were brought to tears. Many said the week in the Amazon was life-changing. Some called the experience their “Road to Damascus moment.”

These experiences might at first glance appear fanciful, but research into the connection between humans and nature has begun to validate the depths of these kinds of relationships. A review of independent studies that purported to find a physiological and psychological response of humans to nature, conducted in 2015 by biologist Paul Sandifer and others, concluded that in most cases exposure to nature elicited positive responses in people and could be convincingly associated with improved health benefits. Sandifer and his colleagues were sufficiently convinced that nature provided tangible benefits that they called for action to combine health and conservation efforts. Their review lent support to an earlier call by Rapport and Maffi who, in 2011, proposed linking cultures and health to the environment under the banner of “eco-cultural health,” defined as “a dynamic interaction of nature and culture that allows for the co-evolution of both without compromising either critical ecosystem processes or the vitality of cultures.” Rapport and Maffi pointed out the need for changes in policy toward fostering combined conservation and health. 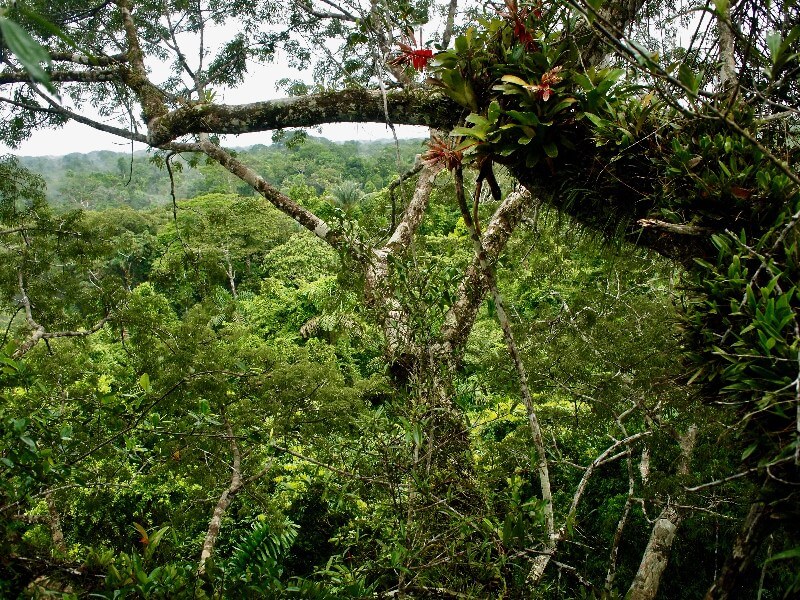 Few places on Earth can immerse you in the diversity of life better than the Ecuadorian rainforest canopy. 2015

Securing nature over the long term, which is of course essential for sustaining life on the planet, is a central feature of a Nature Culture. Places where nature abounds are sacred sources of inspiration and providers of invaluable services and benefits. Identifying and protecting such locations for the benefit of all people (and of all of life) is of paramount importance. 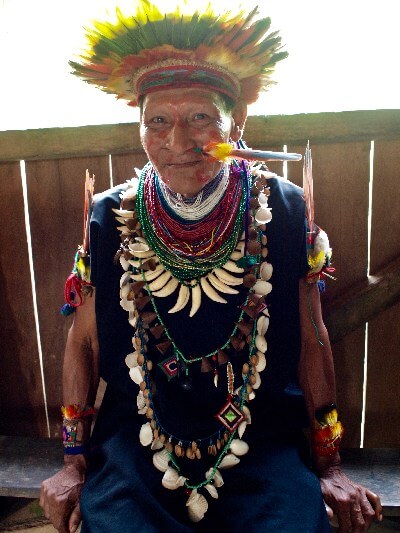 An Amazonian shaman in Ecuador. Indigenous cultures are often close allies with nature. 2009

A resilient natural world is a hallmark of a Nature Culture. In eco-speak, resiliency refers to the ability of an ecosystem to recover from a shock and continue to function. For example, the removal of large predators releases their prey to use habitats that they would have otherwise avoided from fear of being killed, which thereby sets in motion a cascading chain of destabilizing ecological interactions. A celebrated example of reversal of this detrimental effect was apparent shortly after wolves were restored to Yellowstone National Park in the USA after a hiatus of several decades. Fear of the newly returned wolves altered where elk chose to forage in the park, thus releasing aspens and willows to flourish, which attracted to the park beavers whose dams gave space for aquatic insects, which in turn attracted birds to eat the insects. In this case, the restoration of wolves appears to have restored resiliency to an entire ecosystem.

As individuals, we can take action by conducting an audit of how we live, our choice of purchases and waste disposal, and so forth. Some changes are easy to introduce, such as replacing harmful products with less injurious ones, buying goods and food from sustainable practices, and recycling. There are many organizations and programs already in place to help make the transition.

Collectively, communities can create cultural celebrations, traditions, and lifestyles. The community is where a Nature Culture celebrates successes in sustaining nature, formulates new ideas for sustainable innovations and technologies, and pinpoints practices that are unsustainable and need to be transformed. There is no singular way to celebrate nature. How one chooses to celebrate should remain open to everyone’s imagination.

The government level is where policies that promote sustainable lifestyles can direct how society relates to nature: for example, by incorporating the benefits of nature for childhood development into the educational system or the health benefits of nature into health care policy. Research into the mechanisms of how nature benefits our health and well-being needs to be further promoted.

Nature’s raw simplicity can be felt in the silence of an alpine lake in the Muskwa-Kechika wilderness area of British Columbia, Canada. 2012

Many of these actions are already in place. The local food movement, green living, recycling, wind and solar power, and parks and protected areas are a few examples of how people are taking nature to heart. The difference is that Nature Culture embodies all these initiatives within a single vision of establishing a sustainable lifestyle as a cultural imperative.

By now you might be asking how to bring the Nature Culture concept into our everyday way of living. A few years ago, UNESCO awarded World Heritage designation to the Mediterranean Diet. The designation recognized the Mediterranean Diet as central to the feasting culture of the Mediterranean region. What resonated with me was the recognition of culture’s dependency on securing both the land where food was grown and the livelihoods of the harvesters. Cultures involve food as a key focus, and I pondered whether we could have a distinctive celebration of sustainable food from the Salish Sea region where I live, the water and surrounding watershed of the Strait of Georgia, Juan de Fuca Strait, and Puget Sound, in southwestern Canada and northwestern USA. Out of those musings, the idea of the First Day Feast arose.

Time in wild places benefits us in ways we are only just beginning to understand. Muskwa-Kechika wilderness area, British Columbia, Canada. 2012

Our family held the initial First Day Feast on January 1, 2012. We assembled around the table to enjoy and explore locally produced food. We sought local food from sustainable sources. Labels were scoured for ingredients and sources. As an entrée for the meat eaters, we chose beef from the Fraser River Valley, within the Salish Sea watershed. For the vegetarians, we picked a vegetarian pizza. Wheat grown and ground in the Fraser Valley was used for the pizza crust as well as for the piecrust of an apple dessert. Wine came from nearby vineyards, vegetables and herbs from greenhouses in the Fraser River Delta, near Vancouver. Sea salt came from a saltry on Vancouver Island, on the western shore of the Salish Sea. For the pie, we sourced apples from just east of the Salish Sea region (okay, we fudged the rules a bit there). Butter and hazelnut oil came from the Fraser River Valley. Sweetening with honey from local hives served us well. We chose a strong-flavored honey in place of cinnamon to enhance the apple pie flavor. All of the ingredients were available in local stores and farm stalls. Many foods from the ocean could have been included, and plenty of wild foods could have been added to the feast, too.

In 2014, I upped the challenge when the Nature Trust of British Columbia asked me to hold a similarly themed dinner for seventy-five people at the Deep Bay Marine Station near Courtney on Vancouver Island. The food prepared by Vancouver Island University Culinary School students and staff followed the First Day Feast theme, and afterward I spoke about a Nature Culture. The following year, the Arts and Nature Festival on Mayne Island, one of the Gulf Islands in the Salish Sea, asked me to give a keynote address following a First Day Feast theme. On both occasions, people spoke to me about how the concept resonated with their need to make music, develop foods, and create art connected to nature. Many people said it gave meaning to their passions. 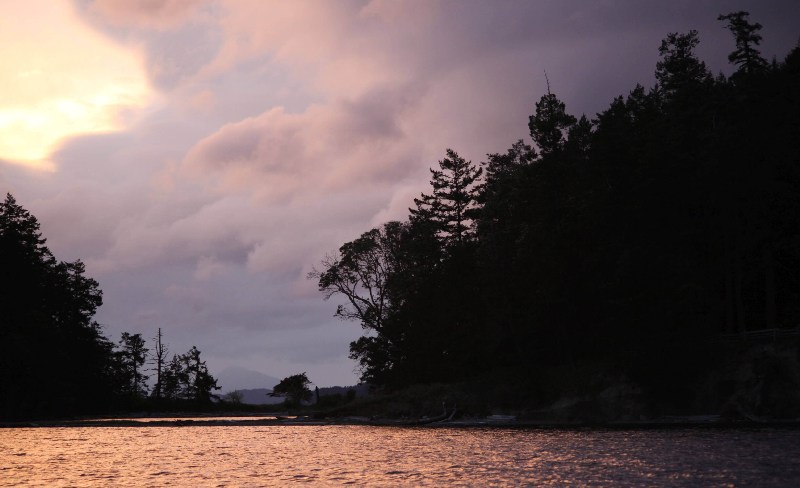 Galiano Island in the Salish Sea: Seasonality of rain and sun defines the region. 2013

Establishing a Nature Culture requires a set of guiding principles for our actions. Unlike the well-known 100-Mile diet, the geographic scale of a Nature Culture matches that of a bioregion. In my case, the Salish Sea bioregion includes beaches and ocean, forests, rivers, deltas, and mountains. The region is the traditional home of Salish-speaking people who have inhabited the surrounding land and water for ten millennia and continue to live there along with over seven million people from around the world. The Salish Sea is a source of natural foods such as salmon, clams, and shrimp harvested from these waters. Farms in the neighboring river deltas and valleys grow a variety of root and vegetable crops sustainably, so as not to undermine the resiliency of the Salish Sea ecosystem and sustain livelihoods. That makes these farms an important component of the region’s Nature Culture.

Exposure to nature is a feature of a Nature Culture that some people find foreign and maybe even frightening. My experiences in the Amazon and in wilderness areas in Canada are not for everyone. Challenging that fear is the first step toward gaining confidence and reaping the benefits of being immersed in natural areas. Education and recreation programs can help here. A Nature Culture could be adopted into school curricula, clubs, and family outings. In a Nature Culture, parks become sacred places in which to introduce our children to nature and become comfortable with living in the wilds for extended periods of time.

Nature Cultures are nothing new to Indigenous Peoples. Many of the elements are already embedded in Indigenous ways. Their examples amply illustrate how rich cultures can develop with nature as the source. Indigenous Peoples have long spoken about respect for nature. What a Nature Culture does is provide recognition to that voice and a philosophical framework for everyone to participate and benefit from all that nature has to offer.

Rob Butler, PhD, is an ornithologist, author, filmmaker, and artist. For over 40 years, he watched, listened to, and lived among birds in the Salish Sea and in distant tropical lands. He met people from many cultures. From his observations and reflections emerged his vision of a Nature Culture as a way to renew our ancient relationship with nature. 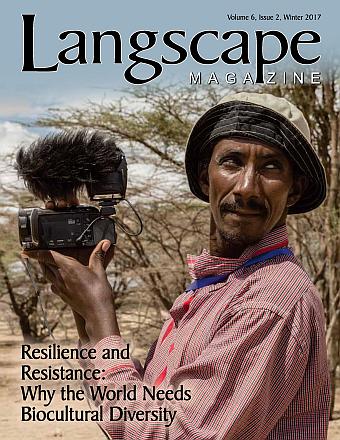 …did you know that Langscape Magazine is an ad-free, full-color publication that brings you unique stories about people and nature from all over the world — inspiring stories that you won’t find anywhere else?

“This is such an amazing magazine, and is great exposure for Indigenous students and the many people that teach, support and are becoming educated on these successes.” — Derik Joseph, Professor, British Columbia Institute of Technology

“Langscape is the heart of the movement.” — Kierin Mackenzie, PhD Student, University of Canterbury, New Zealand

If everyone who reads and likes our magazine helps support it, we’ll be able to continue to bring you these amazing stories into the future. For as little as $10, you can support Langscape Magazine — and it only takes a minute. Subscribe to the handsome print or PDF version of the magazine, or buy individual copies. Thank you for your support!