Against the odds, a tribal farmer in southern India strives to conserve and share dozens of indigenous rice varieties. 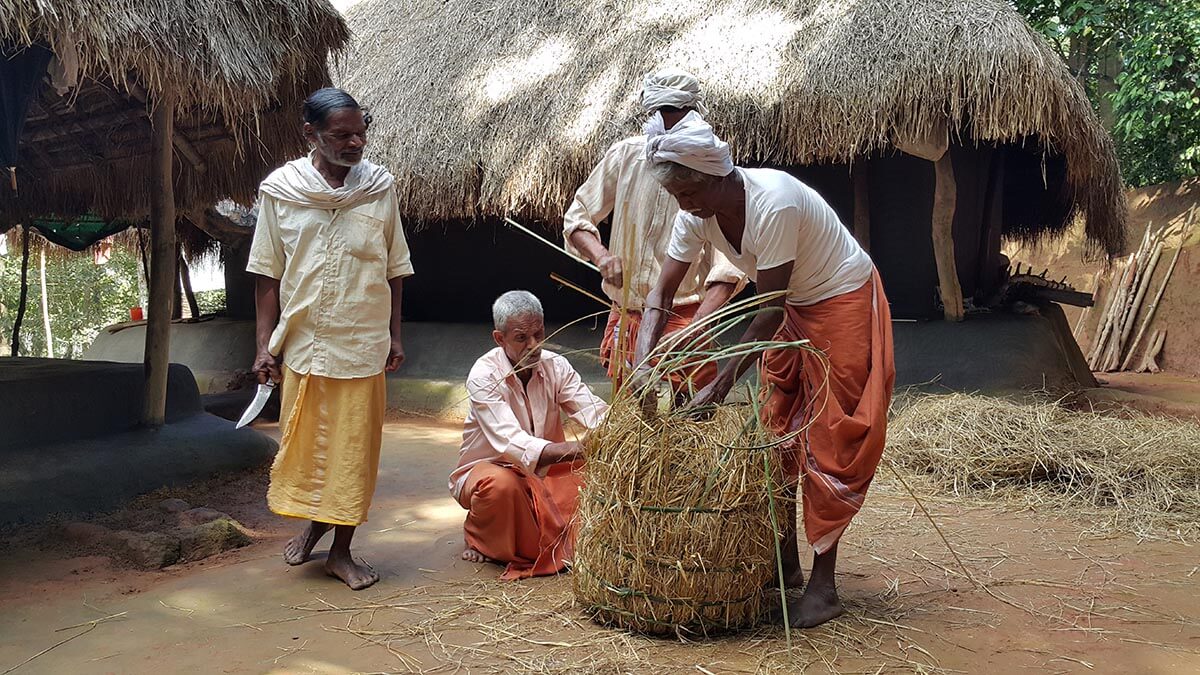 Kurichya farmers practice a unique method for preserving paddy seeds. Rice seeds are wrapped in a layer of dry hay held together with bamboo strips.

It is widely known that rice is the staple food for half the people on earth. In Asia, it lies at the very heart of the continent’s diverse cultures. Rice is also highly biodiverse. Thousands of indigenous rice varieties, well adapted to the agro-climatic conditions of different regions and having many diverse uses, have been cultivated all over the world. But the rich biodiversity of rice is fast depleting. India used to have nearly one lakh (100,000) indigenous varieties of rice. Now, only about 6,000 survive. This is the story of a tribal farmer in southern India who conserves and cultivates over forty-five indigenous rice varieties on his farm.

Rice is the staple food for half the people on earth.

In the South Indian state of Kerala, there is a hilly district called Wayanad. The name “Wayanad” derives from “Wayal Nadu,” which means “Land of Paddy Fields.” The district is nestled among the mountains of the Western Ghats. Wayanad has a large tribal population. Among them are the Kurichya, for whom conservation and farming of local rice varieties have remained part and parcel of daily life. As many as 168 rice varieties, including 78 traditional ones, were originally cultivated in the district. As a part of a healthy diet, Kurichya community members also gather and consume over forty wild mushrooms species, more than fifty kinds of leafy greens, and many types of fruits including wild ones. Over fifty species of inland fish are also on the menu. 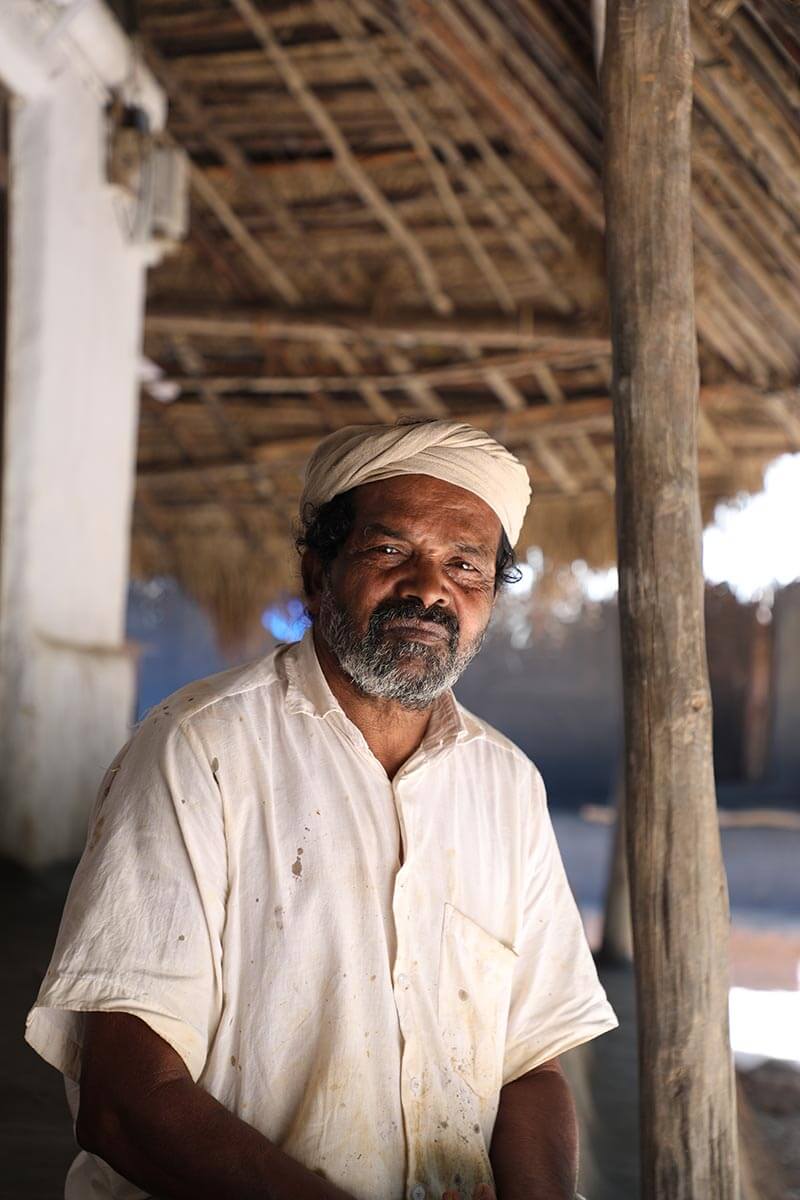 Cheruvayal Raman in his eco-friendly house made with mud and bamboo and roofed with interwoven coconut leaves.

Cheruvayal Raman started practicing rice farming at a very early age, following his family farming tradition. The Kurichya used to have an extended family system in which more than 100 members live in a single house complex. All members of an extended family were involved in agricultural activities. Rice farming was essential to feed such large families. To this day, the Kurichya have great respect for and a sense of intimacy with rice farming. They consider the rice plant as a gift from the gods and even mark the birth of rice on a special day. The transplanting and the harvesting of rice paddies are celebrated with song and dance. The community makes use of various types of rice for rituals and for the worship of their deities and ancestors.

The Kurichya have great respect for and a sense of intimacy with rice farming.

By the end of the 1970s, however, the extended family system had almost disappeared, due both to social change and to financial support from the government to build separate concrete houses for nuclear families. This led to a large-scale reduction in farming of traditional rice, as family labor became scarce. As in other parts of the world, Wayanad underwent many agrarian changes. The community slowly shifted from farming rice for their own consumption to purchasing commercially grown rice from shops. Younger members of nuclear families preferred banana cultivation as it fetched more profit. Paddy farming gave way to growing bananas and other horticultural crops, and traditional farming practices were replaced by modern chemical agriculture. With this transformation, many traditional rice varieties have gone completely extinct, while others are slowly on their way out. 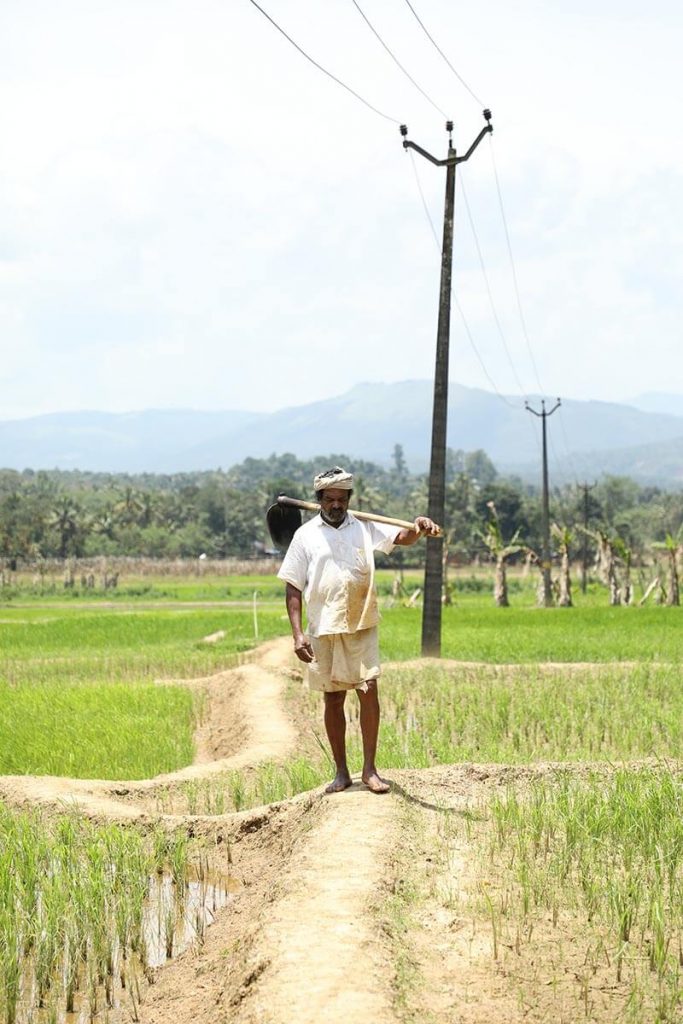 Raman in his rice field. He and other members of his extended family perform most of the labor required for rice farming. The younger generation lacks the knowledge and skills involved in paddy farming.

Striving against all odds, a few of the Kurichya farmers have carried on their practice of conserving and cultivating traditional rice varieties. The most prominent among them is Cheruvayal Raman, who for the past twenty-five years has conserved and cultivated over forty-five rare rice varieties on two acres (0.8 hectares) of land. The varieties cultivated by Cheruvayal Raman differ in taste, duration (time it takes the crop to reach maturity), and uses. There are varieties of rice used for rituals, varieties eaten during special occasions, fragrant varieties, and medicinal varieties. Duration also differs: there are varieties with six, five, four, and, three months’ duration. Some rice varieties exhibit good adaptability to water scarcity, while others can withstand floods.

Cheruvayal Raman is well aware of the ecological significance of rice fields.

Cheruvayal Raman practices fully organic farming. Being a Kurichya, he is well aware of the ecological significance of rice fields. He knows that rice fields store rainwater and contribute to the groundwater level in a given area. He can identify many farm-friendly creatures in the fields and how they help crops by killing pests. Raman’s fields are even home to small birds like sparrows, which make their nests on paddy leaves. Like the older people in the tribal hamlets, Raman holds valuable Indigenous knowledge of seed processing, seed storage, pest repellent plants that can be used to deter pests, and uses of various medicinal plants in and around rice fields. He also built his house from material found in his family’s backyard. Mud structures are coated with a mixture of cow dung and wood ash. The surroundings are kept neat so that there is no chance for mosquitoes to breed. 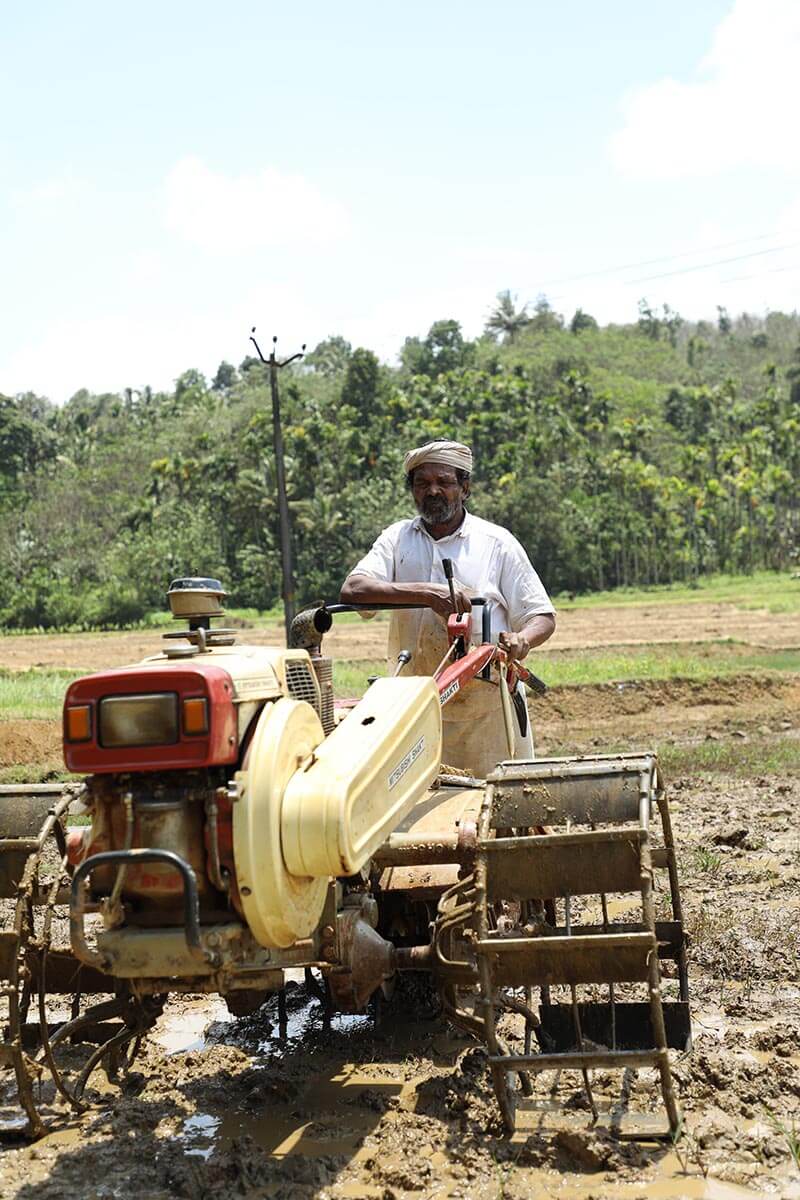 Raman plowing his rice field. Earlier on, bullocks were used but, due to scarcity of bullocks, Raman shifted to tiller plowing.

Raman makes great efforts to popularize the cultivation of indigenous rice varieties not only within his community but also among farmers in the whole state of Kerala.

Raman makes great efforts to popularize the cultivation of indigenous rice varieties not only within his community but also among farmers in the whole state. Without receiving any financial support for his conservation efforts, he established a network of farmers through an informal seed distribution mechanism based on the traditional barter system that was prevalent in the Kurichya community. He gives traditional rice seeds freely to those who are really interested in cultivating them. Only two to four kilos will be given to each person, but on one condition: that they cultivate the rice and during the following year return to him the same quantity he gave them. Raman thinks this is a good strategy because farming of traditional rice will gradually spread in their area. Also, a strong bond will develop among the farmers. Further, when traditional varieties are cultivated, the use of chemical inputs will be reduced and the organic farming of rice will gain momentum. 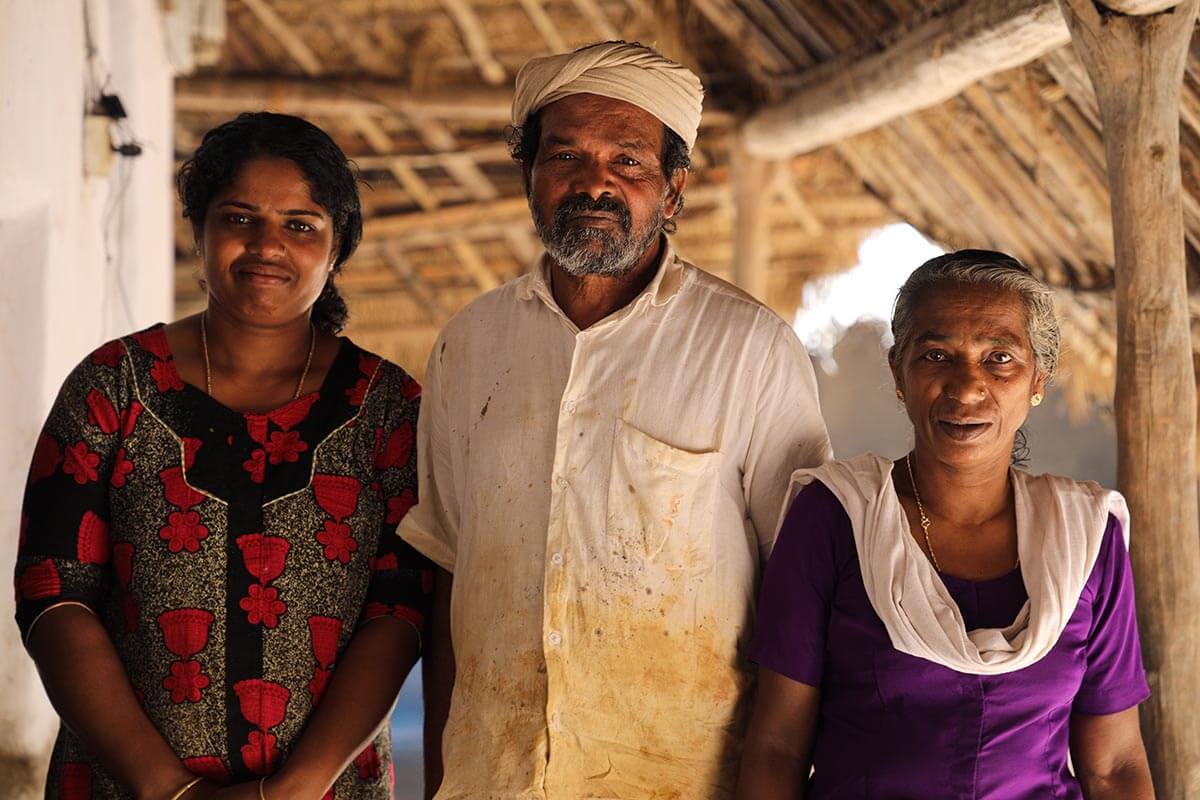 Raman with his wife Geetha and one of their daughters. Geetha is knowledgeable about edible plants and mushrooms. Raman and Geetha have two daughters and two sons. Like other younger community members, however, their children are less involved in farming.

Due to Raman’s efforts, not only farmers but even school children now realize the benefits of traditional rice. Many visitors come to his house with the intention of learning such things. He gives classes on indigenous rice farming in seminars and workshops throughout the state.

In 2016, Raman was awarded the National Plant Genome Saviour Award instituted by the Government of India’s Protection of Plant Varieties and Farmers’ Rights Authority. His family and the local community appreciate his efforts and have great respect for him.

Kurichya farmers from Wayanad like Cheruvayal Raman offer to the world a model of community-based natural resource conservation and an example of a fulfilling way of life. The lessons that can be learned from such farmers have much to contribute to conservation and farming policies. For Raman and other members of his community, rice is food, rice is tradition, rice is livelihood, rice is respect, rice is relationship, rice is environment, rice is knowledge.

My video is a tribute to Raman’s extraordinary efforts and to the resilience of Kurichya farmers. 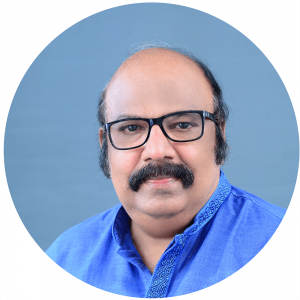 G. S. Unnikrishnan Nair, a graduate in agriculture with a postgraduate degree in journalism and mass communication, is a science filmmaker and science writer who has won thirteen national and eleven state awards in India. His documentaries have been screened in many national and international film festivals.