The Course of Heaven and Earth: The Biocultural Diversity of Space and Time 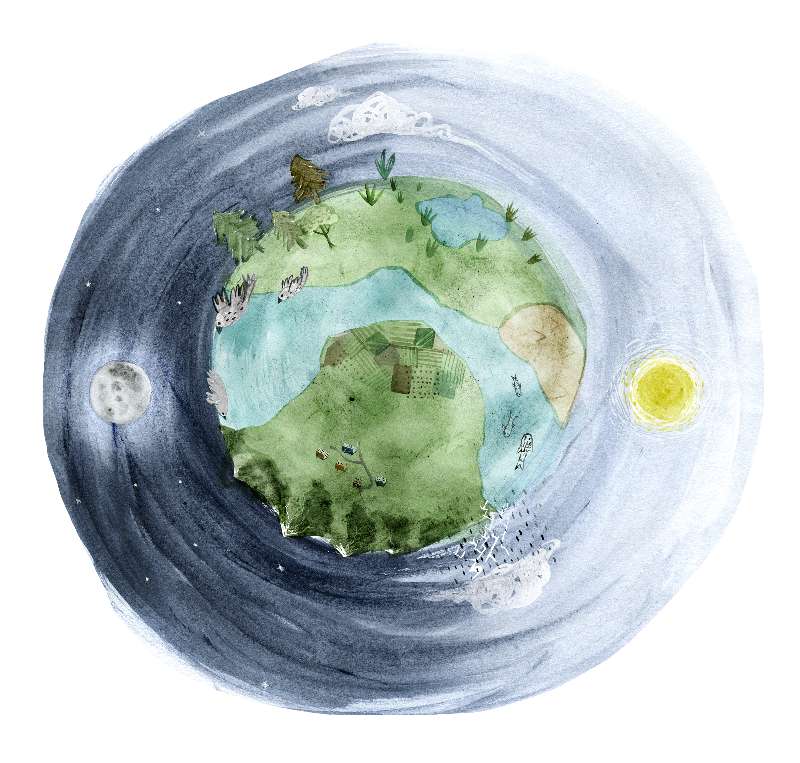 Heaven and Earth. The sun, moon, and stars and the winds and waters all set the rhythms that we live by. Artwork: Katie Wilson, 2015

The rhythms of the sky and the lands and the seas are one, and they are all interconnected. The cycles of the seasons, the phases of the moon, day and night, and the ebb and flow of the tides have all been utilized in traditional forms of time-keeping, as have weather patterns, the flowering of different species, and the appearance of different species of birds and fish. Non-human communities likewise use many of these cues and others to guide them in their activities.

To make sense of the world and our place in it, we need to have tools to understand it and the composite parts of space and time around us. We must know where and when to plant, to harvest, where we can gather, where we can hunt, and so on. This is especially true for people living closer to the other species on the planet. For those of us who do not farm, nor fish, nor hunt, it is possible for a Wednesday in March at the climate controlled workplace to be not that different from a Thursday in October, with the holidays and their color schemes marking the transition of the year.

Traditional forms of timing vary from culture to culture, from nation to nation, but in much of the world, the typical way of dividing time uses an industrial regularized grid of years, months, days, hours, minutes, seconds, milliseconds, all the way down to the vibrations of atoms, chosen for the purpose of time-keeping due to their extreme regularity. We add leap seconds to some years because this framework is more regular than the planet itself, once seen as the epitome of regular. This industrial time has displaced the natural rhythms of the sun and moon, winds and waves.

Everything is connected to everything. Fulfilling the needs of any group of people entails interacting with the rest of the world to satisfy the requirements of food, clothing, and shelter. The species we eat, wear, and construct our homes from likewise need interactions with the wider world for food, nutrients, pollination, or proper growing conditions. There is nothing on this earth that is not tied to everything else, either directly or indirectly.

How individuals of different species interact with other species and the rest of the world can be glossed with Von Uexküll’s term umwelt, and although we may live in the same world as a moth, or a deer, or an oak tree, our lived experience is very different. That which is of significance to a daisy may not be significant to a sparrow. This extends to distinctions between humans. If I am a hunter, I will notice things that non-hunters do not. If I am a fisher, I will notice things about fish that people who do not fish would never think of. We depend on other species, and we cause them damage when we do not leave them room and time to carry out their activities in their own way.

Industrial time has displaced the natural rhythms of the sun and moon, winds and waves.

Time is not uniform. Human and non-human communities utilize different areas and different seasons, times of day and other timings for different activities. Activities are cyclical. There is a time to plant, a time to harvest, a time when the fish are more likely to bite. There are other times when the best thing to do is to leave areas alone. By keeping track of these differences it is possible to allocate time and space effectively and prepare for the inevitable lean times.

The cultural variance of recognition of soils is referred to as ethnopedology, that of landforms as ethnophysiography, that of the stars is ethnoastronomy, and that of time could be referred to as ethnochronology. Cultural practices inform the recognition and importance of these distinctions and help a community to pick better places and times. The non-human equivalent for other species is folded into the term niche, encompassing the whens, wheres, and whats a given species needs to survive.

Uniform approaches to time, space, and production that have become standard globally through waves of colonization do not always make these distinctions. Traditional patterns of tenure and land allocation have been disrupted. Traditional calendars have been replaced by Gregorian time. The climate has shifted enough that the phenology of many species is now noticeably different, and species are shifting in their distribution patterns to suit the new normal. Over much of the world, nights are no longer dark enough to see the stars, and species like hatching turtles are fooled by artificial lights. Meanwhile, farmers that may have traditionally practiced polyculture systems are displaced or deskilled in favor of monoculture green revolution techniques, and optimize the production of commodities united by universal currencies at the expense of traditional varieties and traditional breeds. There is a price to be paid by this uniformity, and that has been the destruction of forests and waterways, erosion of biodiversity, and extinction of species that no longer have anywhere to go in the areas that were once their strongholds.

There is a time to plant, a time to harvest, a time when the fish are more likely to bite. There are other times when the best thing to do is to leave areas alone.

Ultimately, the old ways in some areas are lost, are thriving in other areas, and are being resurrected in yet other areas. What traditional systems teach in general is to pay attention to the lands and waters and species around you and to pay attention to the cycles that unfold over time where you are. Much of the information remains invisible to those who currently hold much of the power. Those entering and destroying a landscape have incentives to be wilfully ignorant of damage done. Those whose territories are being entered have incentives to keep sensitive information to only those who need to know or have the right to certain forms of knowledge.

However, as the importance and the rights of guardianship over the lands and waters become increasingly recognized, finding ways to share the traditional understandings of space and time with those using a more cadastralized and universalized approach becomes necessary. Tools for this purpose have already been created with participatory mapping methodologies and use-and-occupancy studies and the like. These spatial tools need to be complemented with temporal tools that document recognized interrelations between people, other species and the lands and waters around them. The best tools would be open access and customizable for communities. The default patterns of current Western timekeeping, these being universalized, linear, and discrete. Traditional timekeeping tends to be localized, multicyclic, and continuous.

The twenty-first century cannot be a repeat of the destruction of the twentieth. We need to find ways to limit the damages wreaked by current globalizing forces and to return healthy conditions back to areas that have been damaged. Humanity as a whole has centuries of experience in making mistakes and correcting them via observation, humility, and making room for other species. How we relate to time and space underpins many of the problems we are facing, and many of the solutions, too.

Kierin Mackenzie was born in British Columbia. Most of his family still lives there. He has traveled and worked on several continents, and he sees biological and cultural diversity as the true treasures of the world. He is currently pursuing a PhD at the University of Canterbury, Aotearoa/New Zealand.