The Frontline of Ideology on Mauna Kea: Kapu Aloha’s Example for the World

At 4,207 meters above sea level, where the hot sun burns and harsh winds blister and have a tendency to scrape the soul, stands the summit of Mauna Kea, a mountain on Hawai‘i Island (a.k.a. the “Big Island”) that is sacred to Native Hawaiians. That summit has become a “frontline of ideology”—the site of a standoff with roots in a fifty-year-long confrontation, bringing forth a dilemma of diverging truths. On Mauna Kea, two distinct ideological worldviews—that of Native Hawaiians and that of the United States of America—are clashing over matters of legal jurisdiction. Through the court system and in the physical presence of the raw elements of nature, the legitimacy of Native Hawaiians’ claim over their land is being reaffirmed. 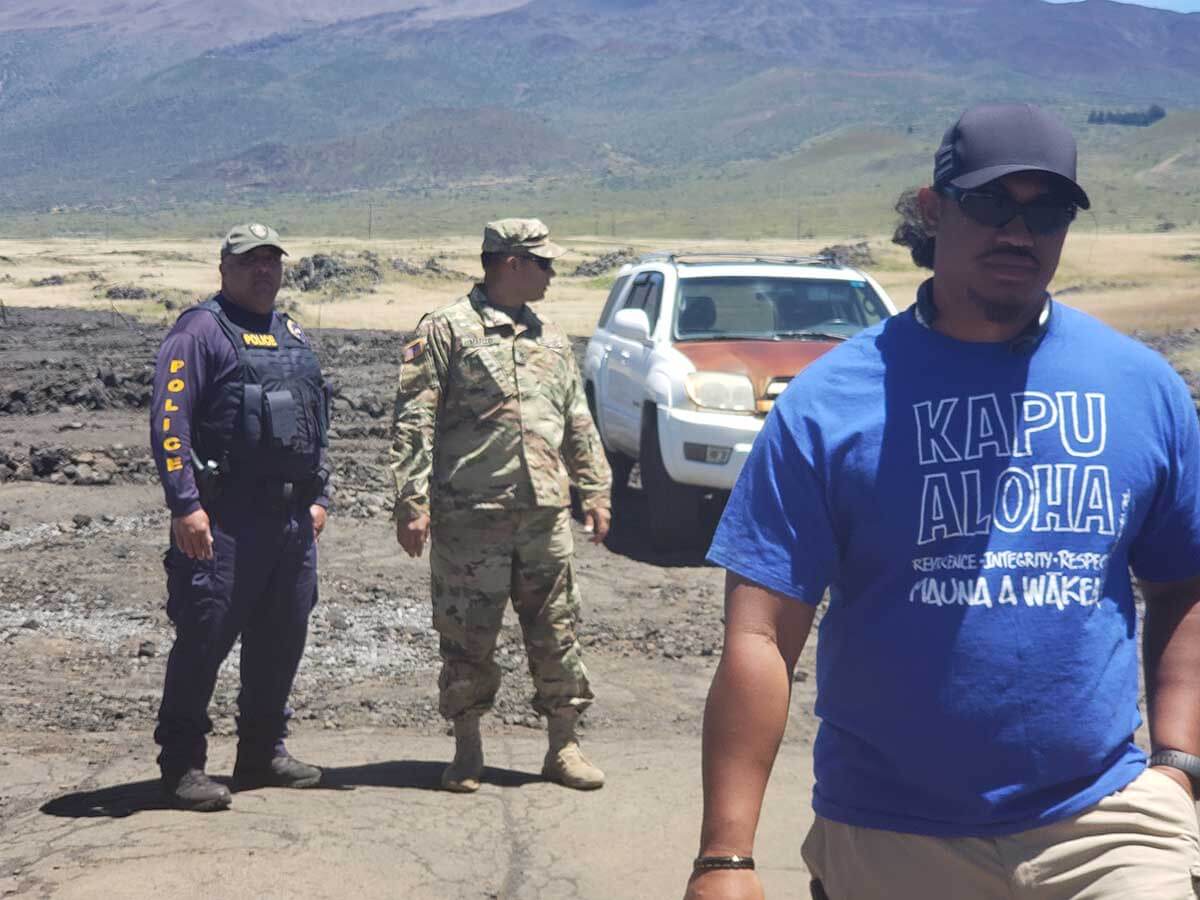 A young Hawaiian assumes leadership to escort a military vehicle through the roadblock set up by opponents of the Thirty Meter Telescope on Mauna Kea Access Road. Photo: Harvy King, 2019

Plans for the construction of the Thirty Meter Telescope are the basis for this confrontation. In oral tradition, the cultural roots of Hawai‘i extend to a period before a tidal flood decimated the population of these islands, a time described as the “Darkness of Antiquity.” In the Hawaiian creation chant, Kumu Lipo, the origins of Hawaiian people are described as Po, or darkness itself. It is into this concept of origin that the Thirty Meter Telescope means to extend its reach, peering into the darkness of space. If constructed, it would be the most advanced telescope in the world. The location is identified as prime real estate for astronomy. Thirteen telescopes have already been built on Mauna Kea.

Since the first Western contact in Hawai‘i—Captain Cook’s “discovery” in 1778—one thing has led to another. From the impact of the Alexander family and other missionaries who cleared the path for themselves and others to take control of the resources, to the continued illegal occupation of the Kingdom of Hawai‘i following the forceful capture of Queen Lili’uokalani in 1893, today Hawai‘i plays a key role as the geostrategic epicenter of the Pacific, under U.S. control. There is overwhelming military presence here. 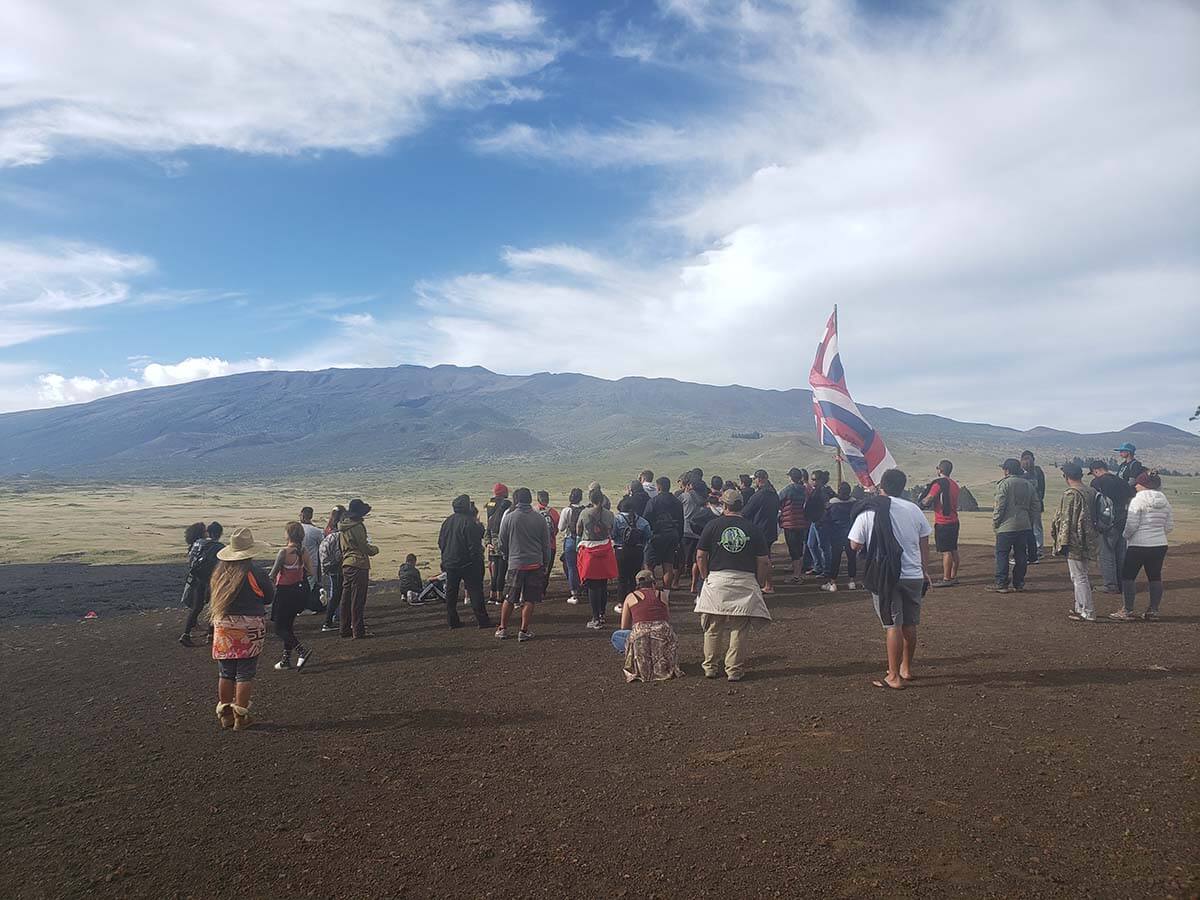 The daily gathering at the summit of Pu’u Huluhulu, a volcanic cone sacred to Native Hawaiians, located in the proximity of Mauna Kea (seen in the background). Opponents of the Thirty Meter Telescope have been gathering at Pu’u Huluhulu to temporarily block access to Mauna Kea. Photo: Harvy King, 2019

Many problems have found their way to this island paradise. The job of shifting focus and priorities from one complex situation to another is an existential runaround that Indigenous Peoples all over the world have had to undergo for centuries. For Native Hawaiians, the latest proposed project on Mauna Kea has caused waves of a flashpoint feud. They have declared that enough is enough. The rallying cry:

!!!Guardians of the Mountain!!!

Kia’i means “guardian” in Hawaiian. The locals are protectors of the land, Aina, and especially of their sacred sites, including Mauna Kea, the sacred mountain.

Kapu Aloha is a growing local movement that might serve as a model to help reshape the entire geopolitical arena, from local to global. Kapu has multiple translations. To make something kapu means to make it taboo, prohibited, sanctified, consecrated, or forbidden. Aloha is a mutual acknowledgment of Love for Creation, the life we breathe and that breathes through all living things. It extends beyond a similar concept known in science as cellular respiration. Aloha is the compass of a wayfinding people who were the first to complete exploration voyages across the greatest oceanic body, the Pacific. Kapu Aloha is a form of Hawaiian defensive posture meant to protect the home front, keeping negativity, greed, and hatred out of a space. Prescribed by Hawaiian cultural practitioners, the practices enforced under Kapu Aloha are to keep the peace and protect everything that falls within its bounds.

Kapu Aloha is a growing local movement that might serve as a model to help reshape the entire geopolitical arena, from local to global. 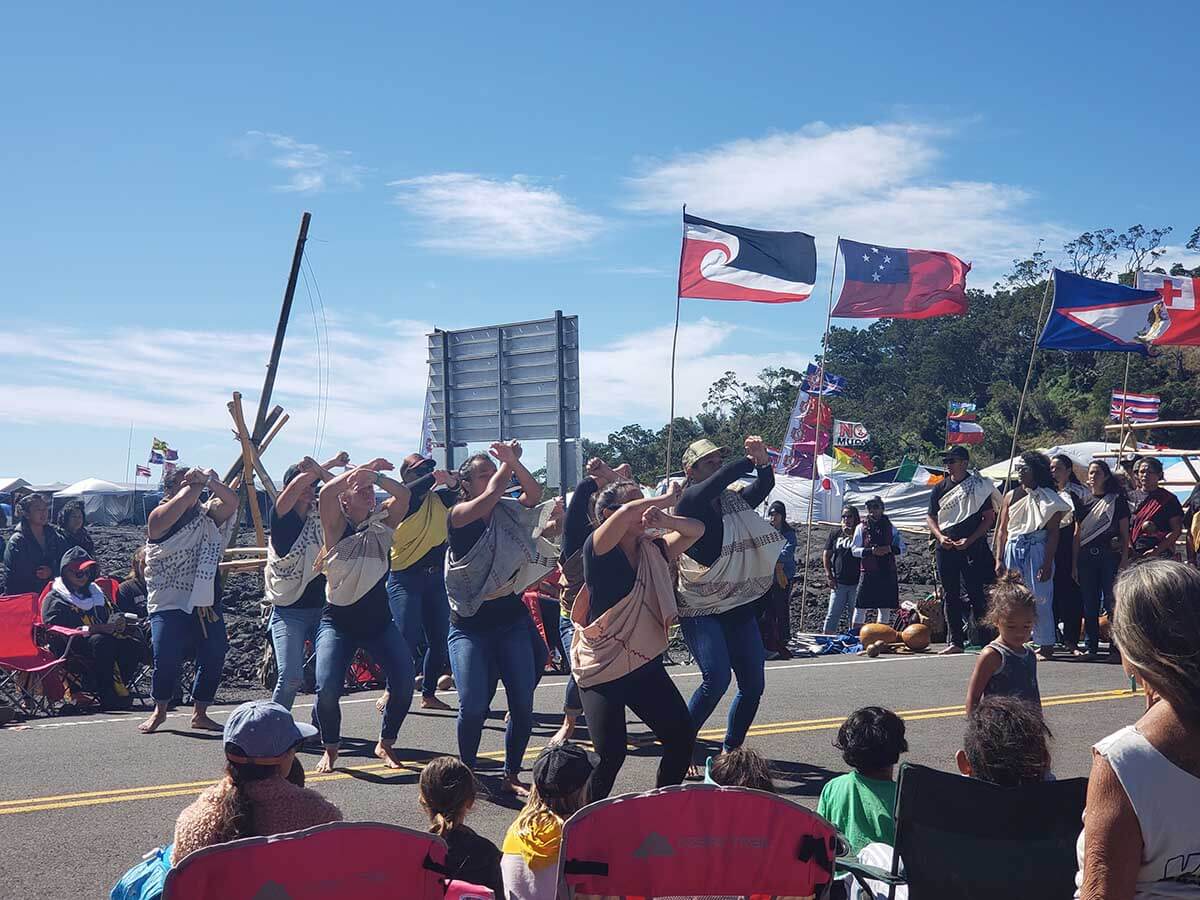 Kapu Aloha might be described as a behavioral pattern similar to delivering a healthy “thanks, but no thanks” over a dispute. At its core, Kapu Aloha offers Hawaiians the legitimacy of self-determination. This idea is often described as being highly politically charged, but you would find that this is not how Hawaiians interpret the existence of their own culture. There is no credible argument that can justify political ambiguity. For Hawaiian people to reclaim control of Hawai‘i directly challenges the presence of the United States in Hawai’i—and therefore calls into question control of the entire Pacific. The legal implications on both sides of the argument are well documented. What happened in Hawai‘i has had a profound effect on its Indigenous people and has also altered the course of human history for the rest of the world, leaving a mark on this planet that is hard to fathom.

Of the millions of people that visit Hawai‘i every year, not many make a significant connection to the original inhabitants of this oceanic fortress.

Paradoxically, there is no widespread awareness of these far-reaching circumstances. Of the millions of people that visit Hawai‘i every year, not many make a significant connection to the original inhabitants of this oceanic fortress. In fact, as international visitors come and go, many don’t even pay attention to the fact that Hawaiians do exist. All who visit here would be well advised to recognize and acknowledge Hawaiian culture as embodied by cultural practitioners. 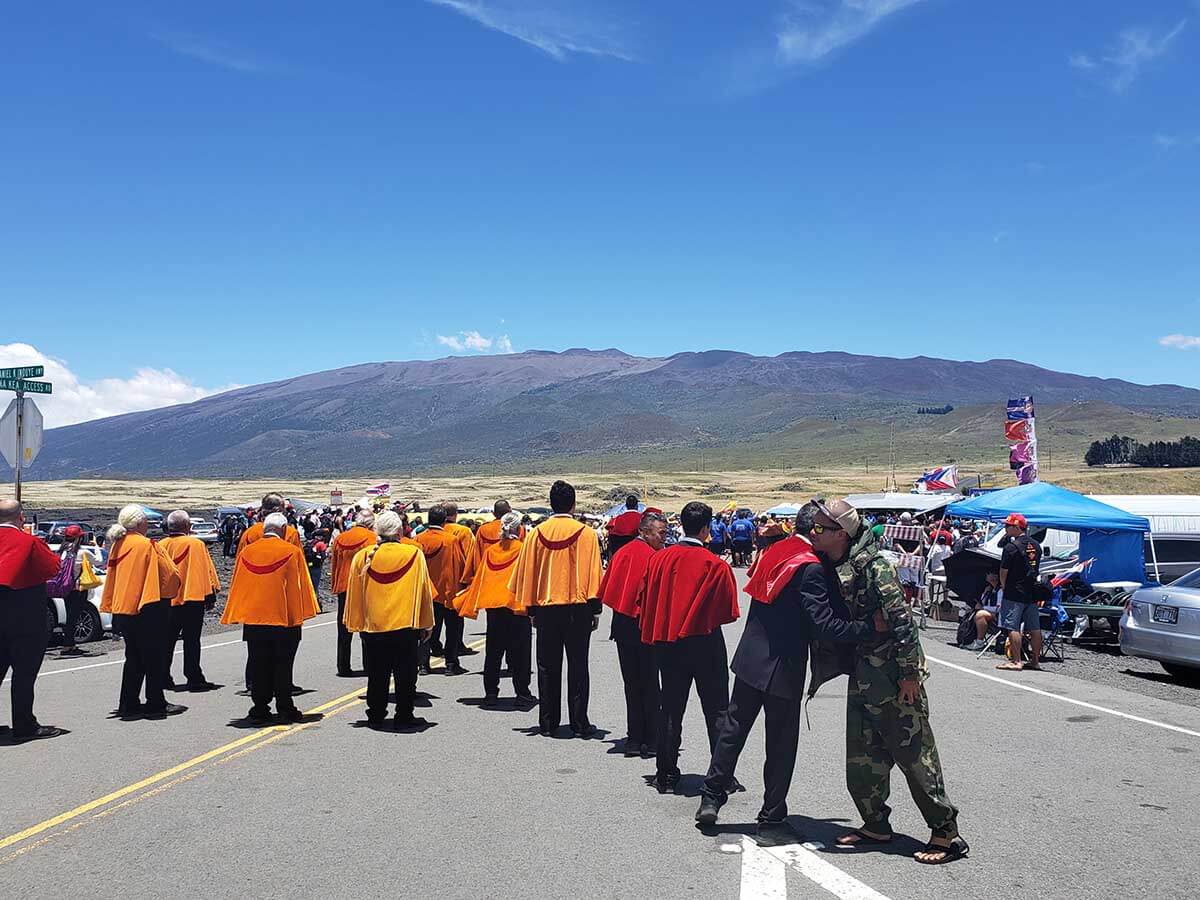 The Royal Order of Kamehameha I (an order of knighthood established in 1865 to promote the sovereignty of the Kingdom of Hawai’i) positions itself for the Ho’okupu (gift or offering) ceremony after the Hula protocol. Photo: Harvy King, 2019

Creativity is preferable to segregation. In the space between ideologies, identifying opportunities for a collaborative and compassionate resolution of the conflict on Mauna Kea calls for understanding diverse worldviews and making an effort to find the necessary adjustments for peace. The long arm of justice is a marathon, not a race. The authority of the local Hawaiian-led movement are the Hawaiian Elders (Kupuna). Local Hawaiian governance is strengthening in both a vocal and a quiet way. At times, the imminent threat of violence on Hawai‘i’s sacred mountain hides behind spurious justifications. Arguments against the locals and in favor of the telescope often claim that Hawaiians are incapable of managing their own land and water resource rights. Yet the historical evidence shows that the ancient practices sustained a highly functional society with a strong capacity for food production based on culturally aligned resource use. 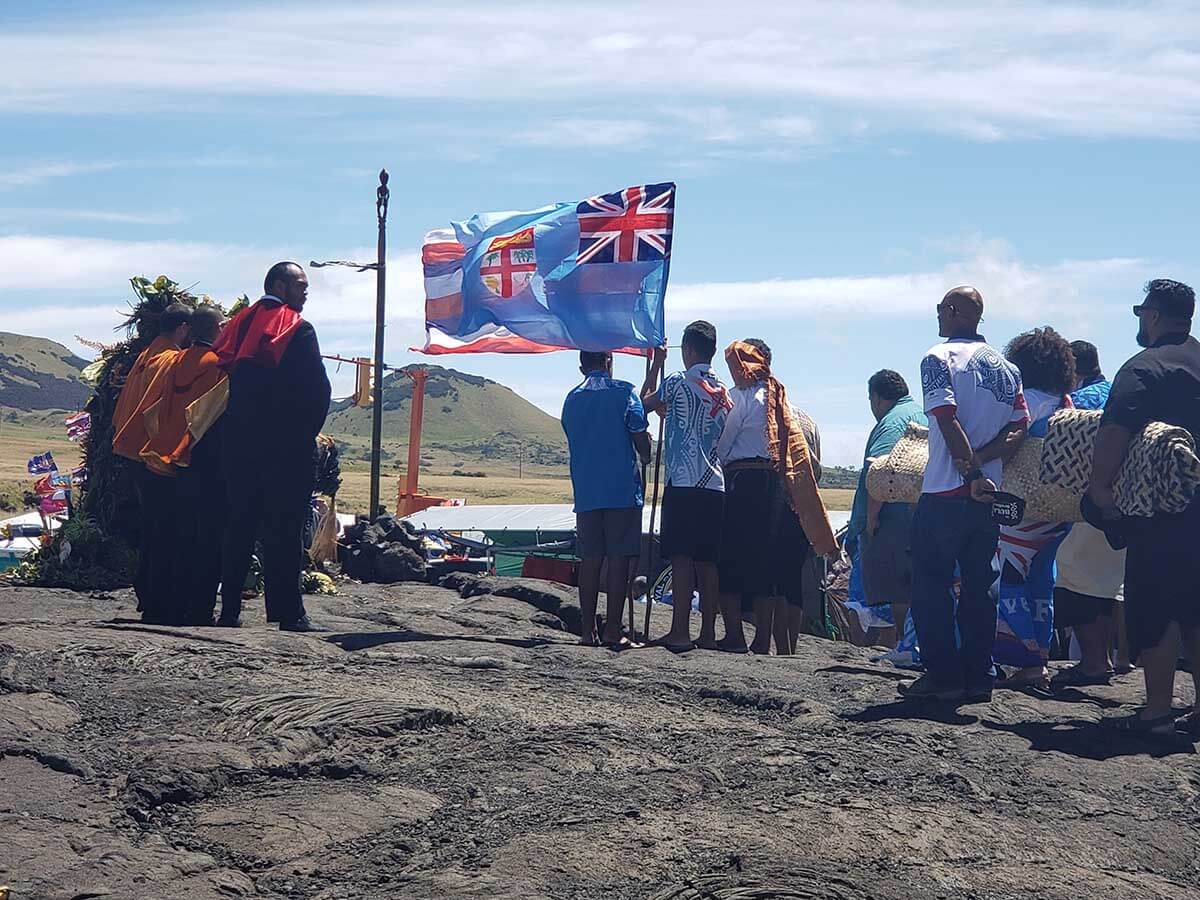 A delegation from Fiji, arriving at Mauna Kea to show solidarity with Native Hawaiians, pays respect at the stone altar. Photo: Harvy King, 2019

Today, land use regulations can generate the conditions of societal segregation, inequality, and poverty. Development policies here and abroad incorporate one argument in particular, “critical infrastructure,” according to which any community-led opposition to proposed development projects can lead to public-disturbance arrests and even to designation as domestic terrorism. The community’s basic needs are often neglected and their rights are infringed upon. To counter these systemic ills, what is needed is local governance leadership that operates in cultural alignment.

Kapu Aloha represents how identity and ideology can acknowledge each other and coexist. Native Hawaiian Elders continue to pursue their efforts to affirm themselves and their people as rightful stewards of their own land and resources by applying their genealogical rights. As the Elders of the local Hawaiian Kapu Aloha movement launch their call to action, still declaring that enough is enough, classic and advanced crowd-control methods are a known threat from the State of Hawai‘i’s enforcement authorities who maneuver in support of the desecration of Mauna Kea and other sites across the islands. 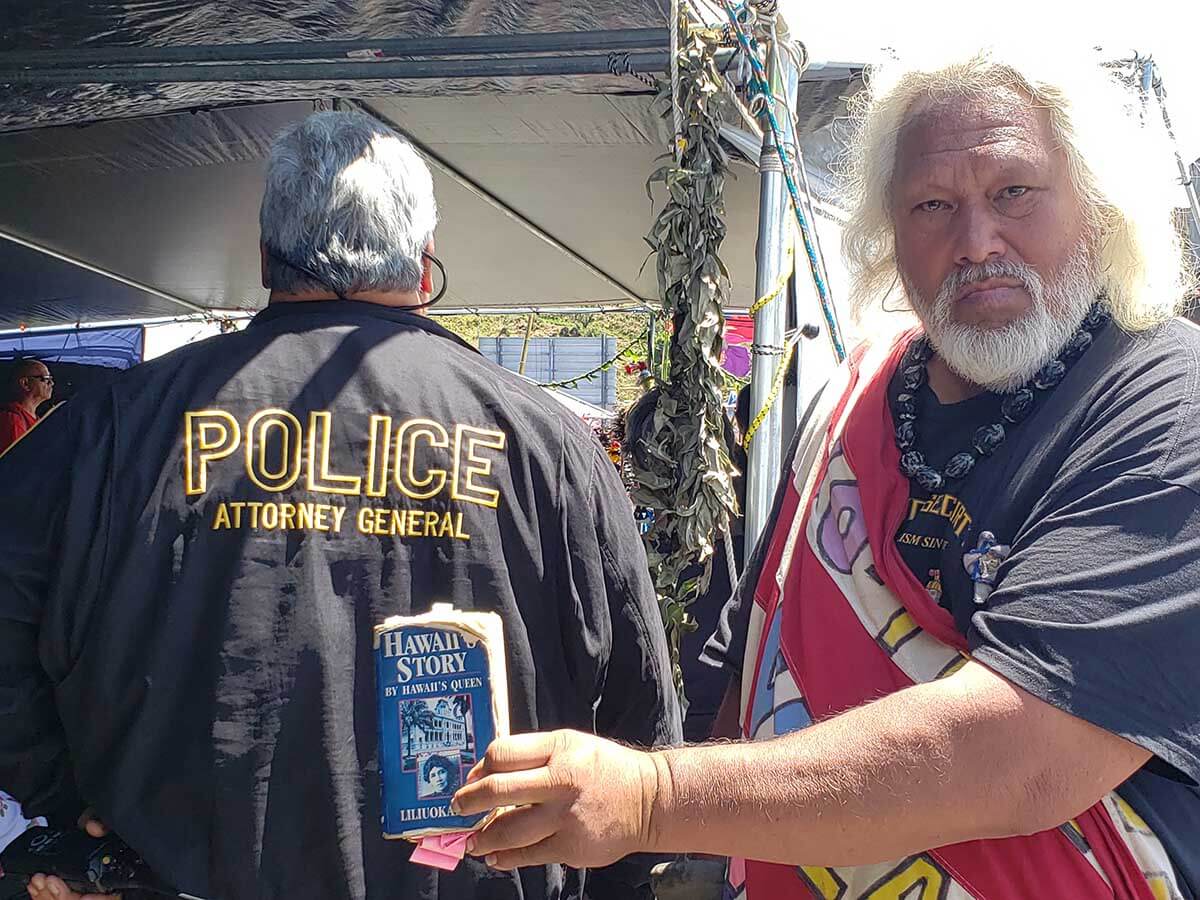 The frontlines of ideology persist, and the natural elements bristle with a continued dispute. Yet progress is being made. To perpetuate the life of the land, justice must prevail. Through an Oceanic revival and with a spirit of resilience that has persevered for well over a century, this transition will press forward with strength and determination—or, in Hawaiian, imua.

For more information about the Mauna Kea blockade, visit https://www.puuhuluhulu.com/ 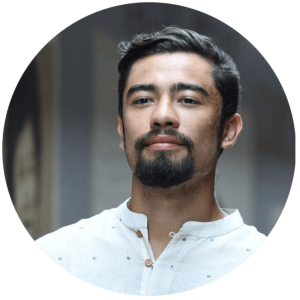 Harvy King is originally from Guatemala and was raised in Michigan. A U.S. Navy veteran, he is enrolled in a Justice Administration degree at the University of Hawai‘i West Oahu, with an orientation in Sustainability Studies. Read more from Harvy King.