The Girl and the Geese

An Ojibway girl tells a traditional tale with important life lessons that she first heard from her Grandpa. 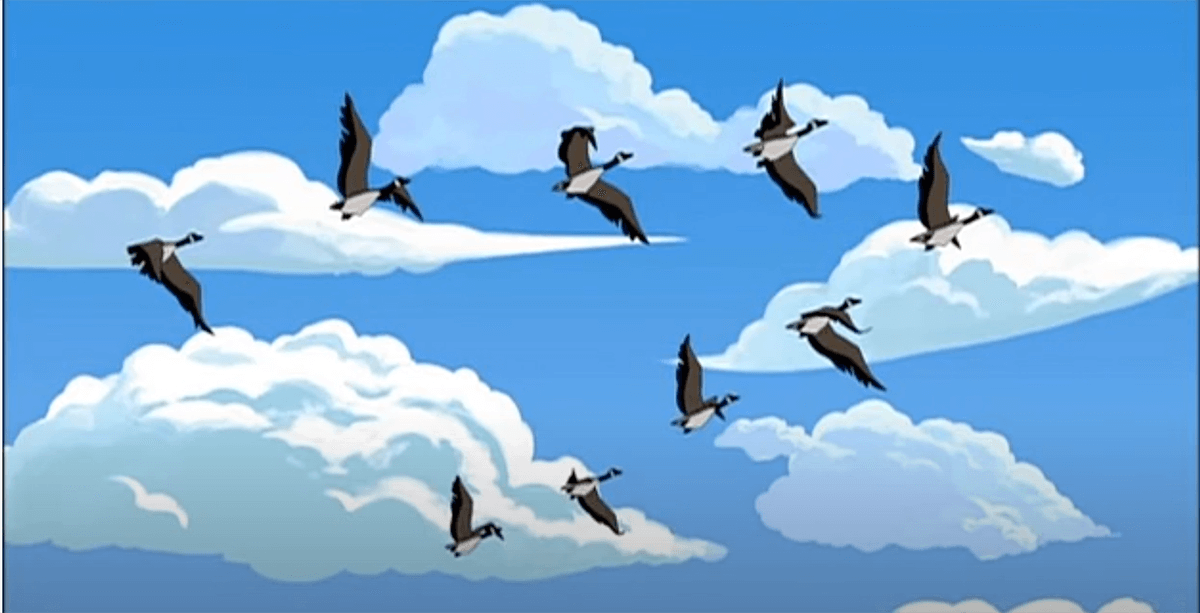 Flight of the Geese. A frame from “The Young Girl and the Geese,” an episode in the animated children’s series Amy’s Mythic Mornings, written by Nova’s father Darryl Whetung. In the series, Amy and her two friends Theodore and Casey adventure into the world of their Indigenous grandmothers’ legends and learn important life lessons.

Many years ago, there was a family preparing for a hard and cold winter season soon arriving to an Ojibway winter village on the Great Lakes of Ontario.

A young girl was in her wigwam (birch bark house), daydreaming of a warmer place to be. Her Nokomis (Grandma) interrupted her dream and said, “My girl, I need your help to get the wiigwaas (birch bark) to patch the holes in our wigwam — the cold is coming.”

Nokomis said to her granddaughter, “In the forest you will come across ten birch trees. You will strip the trees of their bark, but before you do so you will honor wiigwaas (birch) by saying a prayer and saying miigwetch (thank you) for your gift that keeps us warm.” Nokomis then said, “Grab two sacks of manooman, our wild rice, from the Elder who lives by the lake and bring it home. Then you must ask the geese for some feathers to stuff our blankets to keep us warm.” The young girl nodded while her Nokomis told her, “The geese will be leaving soon to go somewhere warm, so be as quick as you can.”

The girl set off on her task with a new plan: to go somewhere warm with the geese.

When the girl arrived at the birch trees, she took the bark from wiigwaas without saying a prayer or expressing her thanks. Instead, she rolled the bark into a giant solid scroll. The scroll was strong like a sturdy branch.

She carried the birch bark scroll to the Elder by the lake and collected the two bags of wild rice, again without expressing her thanks.

The girl carried her scroll and the sacks of wild rice to the place of the geese, who were organizing their families to leave for the winter. “Geese, I offer you these bags of rice, and in exchange you will wrap my arms in feathers.” The geese happily agreed by honking loudly. The girl then said, “I will hang on to the birch bark scroll with my teeth and flap my feathered arms while two of you each hold an end of the scroll with your beaks to support me in the air.” The geese agreed.

Suddenly forgetting that she was hanging onto the scroll with her teeth, the girl fell down from the sky and landed on the bags of rice beside the Elder. The geese then dropped the scroll, which landed on the ground beside her.

Nokomis, who was crying over her granddaughter, was happily interrupted by the Elder approaching the wigwam with the girl. The girl apologized to her grandmother for only thinking of herself. With the feathers on her arms she stuffed the blankets, and with the scroll from the birch she patched the wigwam. With each patch she gave thanks to the birch. The Elder, who was noticing the girl’s hard work, gave the family two more bags of wild rice.

Wrapped in a feather blanket and eating rice with her family in the warm wigwam, the girl finally found the place where she was the warmest. 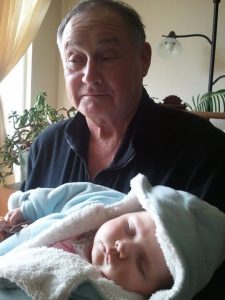 Nova as a baby with her Papa. He’s been telling her Anishinaabe stories since she was an infant.

“The Girl and the Geese” is an Ojibway story that I heard from my father and my Papa (grandfather) when I was five years old.

The moral of this story is to respect and give thanks for all gifts that are given and to openly share your own gifts with all beings in our world.

When I first heard this story, I didn’t know much about the world yet. But now that I am older, I think the message that the story tells can teach people how important it is to respect others and that we have a responsibility toward the care of our family and ourselves. We must give thanks to Gitchi Manitou for bringing us into this beautiful world.

Stories like this are important because they teach us values of respect and personally remind us of our families’ storytelling history and to take care of ourselves and others.

Stories like this are important because they teach us values of respect and personally remind us of our families’ storytelling history.

I am deeply grateful for my family and friends because they have taken care of me all my life, and that care has given me inspiration to take care of others and the natural world.

See “The Young Girl and the Geese” episode on Apple TV or YouTube.

Back to Vol. 11 | Read the Table of Contents | Back to IYSC | Like Our Stories? Please Donate! 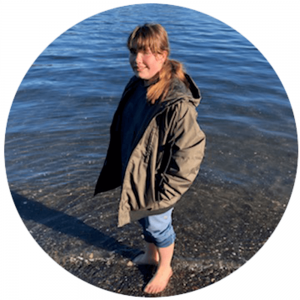 Nova Whetung is an eleven-year-old Ojibway youth who lives in Victoria, British Columbia, Canada. She loves learning about her Anishinaabe stories and language from her father and her Papa. She likes to read, write, make dreamcatchers, take photos, and now looks forward to learning beadwork and moccasin-making with her sister Raleigh from her Auntie Karen.