There Are No Corners in the Tundra 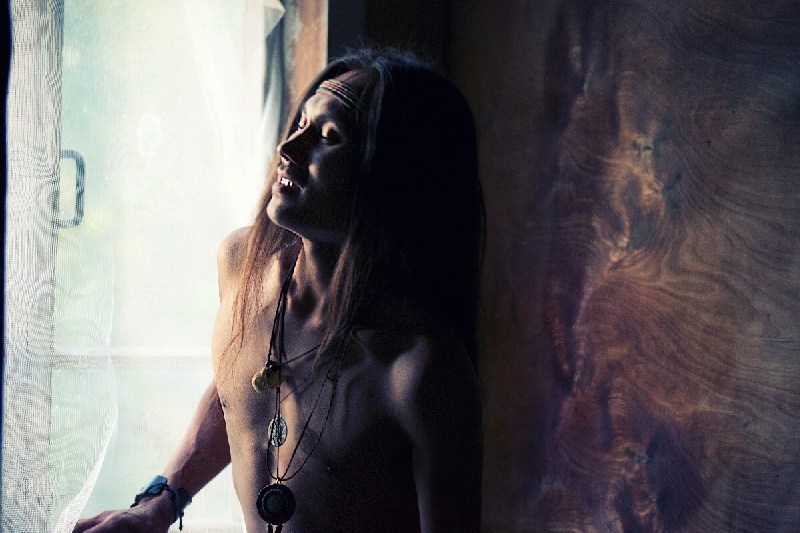 “I was jailed in a Russian boarding school where they tried to make a Russian second-class citizen out of me — because I was a ‘primitive Nenets.’ I rebelled.” Photo: Galya Morrell, 2017

I was born in the tundra and grew up with the animals. My first language was the language of reindeer and of Arctic birds. I was raised by my grandparents, like everybody else here. I was a lucky guy. As an artist, I see my main mission in storytelling, in seeing the past and the future with an unobstructed eye.

My first language was the language of reindeer and of Arctic birds.

“In the civilized world, you have beds and walls. I miss my tundra every single second, just because the tundra does not have walls.” Photo: Galya Morrell, 2017

Khadry was born in a chum, a mobile hut made of reindeer skins, in the Yamal Peninsula tundra of northwestern Siberia. He grew up with the reindeer and moved across the vast land with his nomadic family. When he was seven, he was told that from now on he would have a different name, a Russian one. Two hours later, a helicopter landed next to the chum and took him to the residential school. There he was told to forget his native language and culture because it was too barbaric and uncivilized.

In the tundra, we didn’t have toys; instead we had little straws, patches of skin, and little rocks. When I was five, I was building little chums and little reindeer sleds and carving little wooden toys.

We imitated the voices of animals and birds. We knew how to talk to them.

Every night, after a long day, we went to bed and were telling stories.

We were never punished by our parents and grandparents and never had to stand in the “corner.” There are no corners in the tundra.

In the residential school, storytelling at night was forbidden. As a punishment, we were pulled out in the corridor and were told to stand there in our underwear, or sometimes we were stripped naked. It was very embarrassing, and we couldn’t understand what exactly we had done wrong.

In the residential school, storytelling at night was forbidden. As a punishment, we were pulled out in the corridor and were told to stand there in our underwear, or sometimes we were stripped naked. It was very embarrassing, and we couldn’t understand what exactly we had done wrong.

I missed the freedom of the tundra and continued storytelling and making art in a clandestine way. 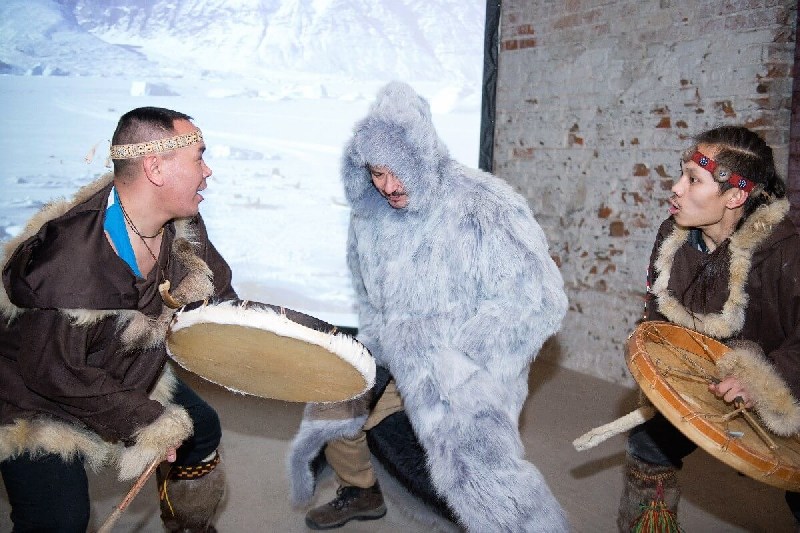 From an orphanage in the Arctic to the heart of Moscow: Khadry Okotetto performing at the Schusev Museum of Architecture during the opening of Galya Morrell’s Icebergs exhibition, brought infrom Greenland. Photo: Galya Morrell, 2017

Today I want to tell the story of my land. I know how to imitate birds, seals, walruses, and the Arctic wind, so I really don’t need an interpreter. I want to make friends with people of Alaska, Nunavut, and Greenland because the Arctic should not have any borders. We are brothers — Arctic Without Borders!

I am a dancer, singer, sculptor, fashion designer, but most importantly, I am a storyteller. 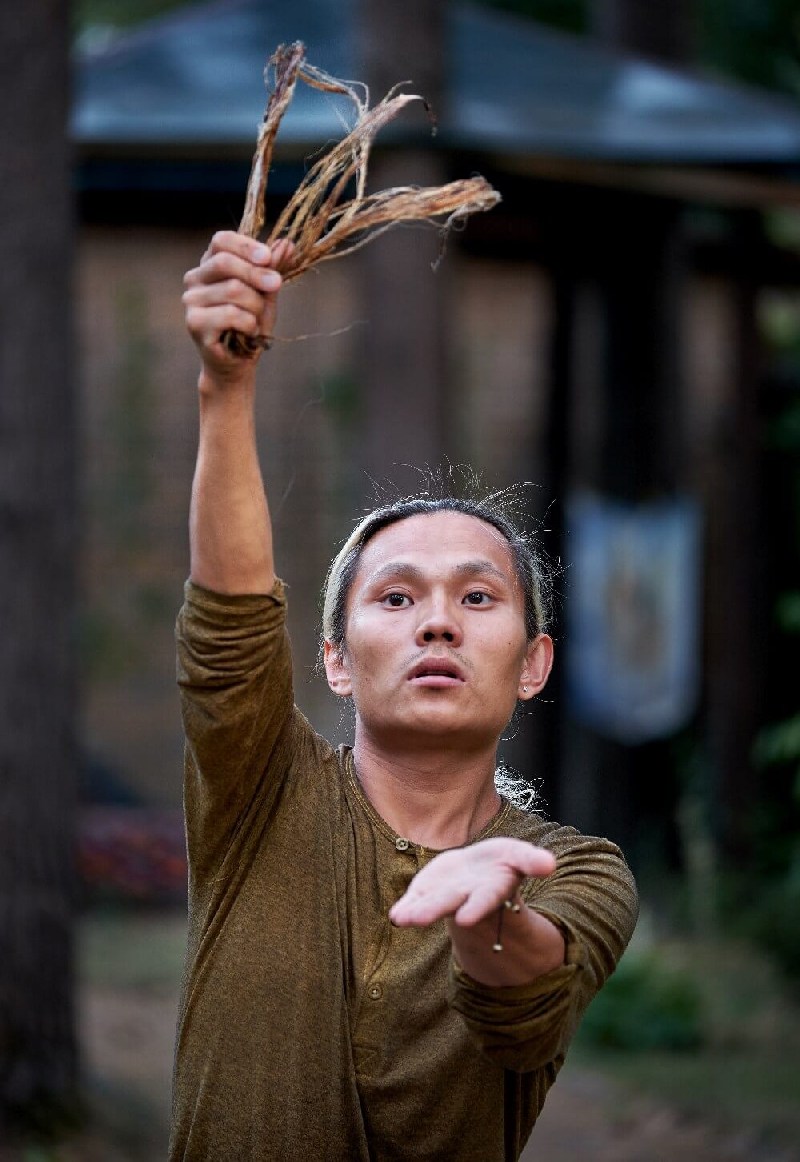 “Reindeer dreams. I was born in the Chum in the Tundra, and the Reindeer was our God. Now I live in a big city but I still follow his way.” Photo: Galya Morrell, 2017

The name of my latest artwork is “Arctic Jailed in the Golden Frame.” It’s the story of the birth of a man into an illusory world. Today we are all born into a cage of stereotypes.

I built a nest out of broken mirrors — they represent snow, ice, and our shattered illusions, and a little tent above it. 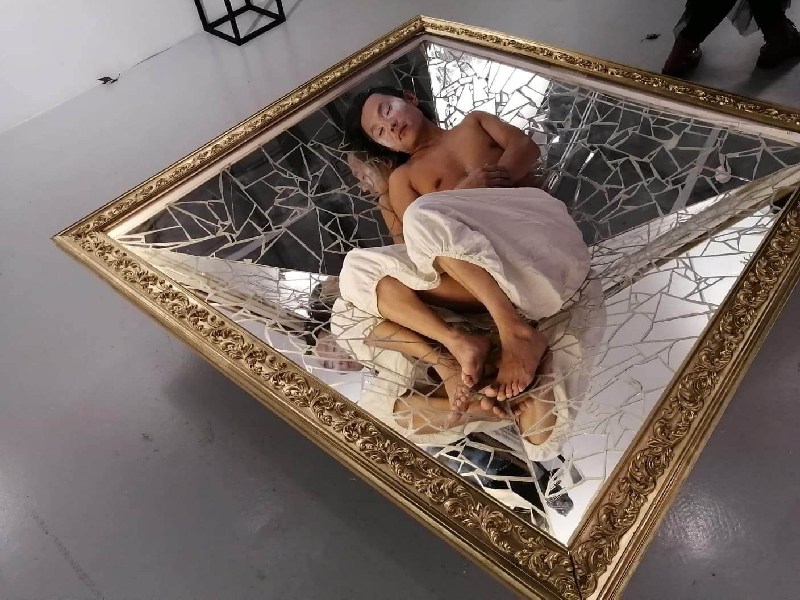 “We live in a ‘broken life.’ We don’t remember the past and are blind to the future. I have broken the mirror into thousands of pieces to start the Circle of Life once again.” Photo: Galya Morrell, 2019

According to the Nenets, the universe consists of seven cardinal directions: North, South, East, West, up, down, and the center, which represents a human being. Each person comes to this world equipped with his or her own world, and that world forms with the birth of a person.

To be truly born, you need to sever the chains of stereotyping. And that’s the hardest part. I want to combine tradition and modernity in my art so that it may be understood not only by the members of my nomadic tribe, but also by anyone living far away from my land.

I want to combine tradition and modernity in my art so that it may be understood not only by the members of my nomadic tribe, but also by anyone living far away from my land. 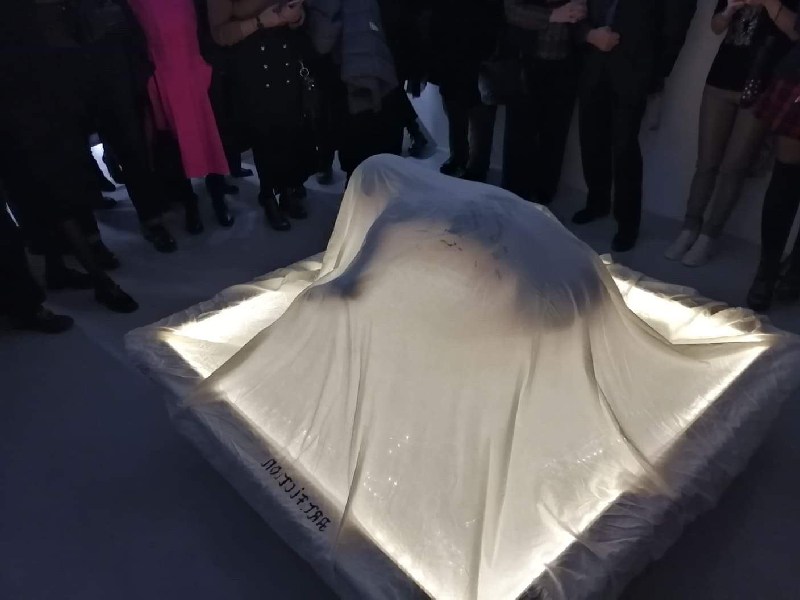 “We are born naked. We are born with no chains, and no entitlements. We all come to the surface from underneath the drifting ice. I live as a reminder to the people who forgot why they were born.” Photo: Galya Morrell, 2019

Khadry Okotetto is an Indigenous artist from Yamal Peninsula. He was born the Yamal tundra, moving across the vast land with his nomadic family. At age seven, he was taken from his family and to a residential school, where he was forced to forget his native language and culture..