There Is So Much More to a Story than Meets the Eye: Tales from the Dusun of Ulu Papar, Malaysia 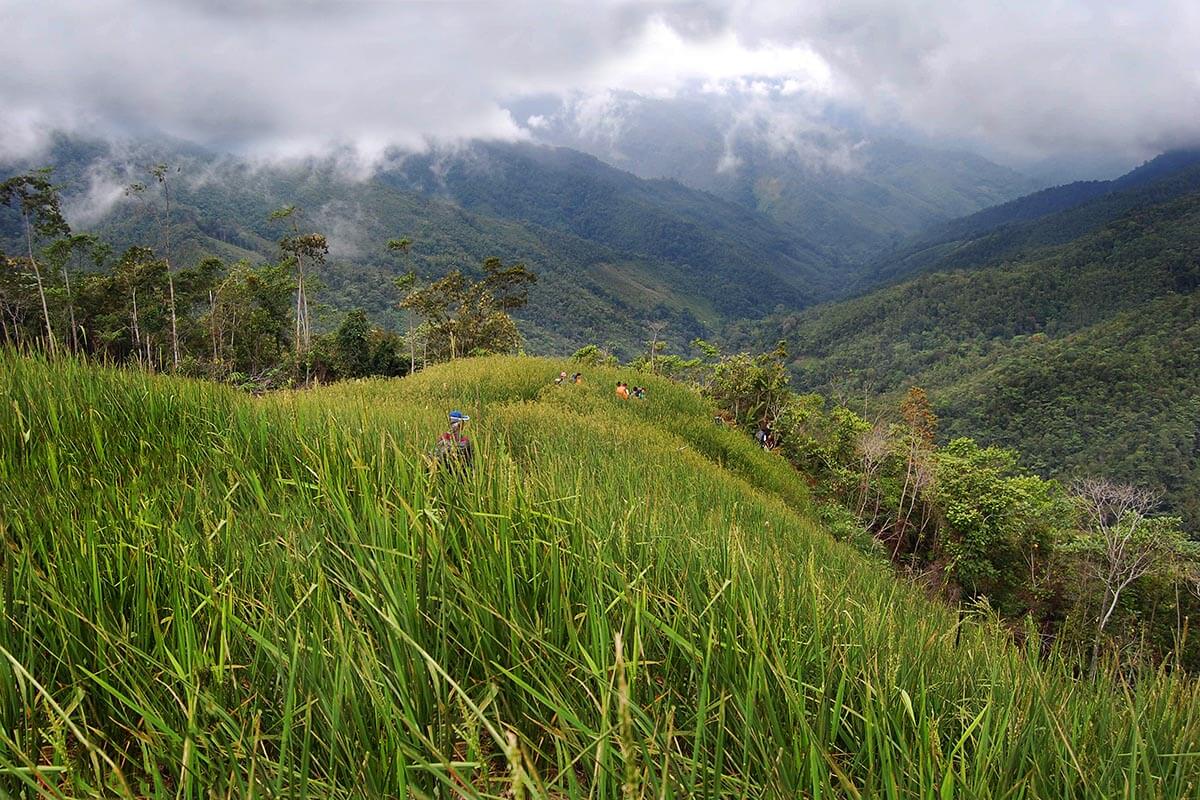 Agricultural landscapes are a common feature for Dusun communities in the Crocker Range. Photo: Stanley Kurumbong, 2010

Malaysia is a vast country with a mosaic of cultures blending Asian and European influences. Its natural heritage spans rainforests that are home to many species of endemic wildlife, the great heights of its mountains, and seas filled with amazing underwater creatures. I am from Sabah, the Malaysian portion of the island of Borneo, and am a native to my land. I would like to share my own journey of discovery of those who share this land with me.

As I was growing up, I often heard those around me proclaim how we live in this alluring Malaysian state with a heterogeneous and culturally diverse population boasting over thirty ethnic groups and more than eighty local dialects. My father, like so many others from his generation, moved away from his kampung (meaning “village” in our national language, Malay) as a young man to seek a successful career for himself, raising his three girls in an urban setting with his West Malaysian wife of mixed Chinese–Indian descent. As a result, we became a classic example of cultural amalgamation, a blending of cultures to create a new one. Some would say we were an example of the degradation of our cultures of origin. By failing to learn our parents’ native languages, my sisters and I inadvertently undermined their continuity, adding to one of the major threats to traditional knowledge and wisdom.

My family is a classic example of cultural amalgamation, a blending of cultures to create a new one. Some would say we were an example of the degradation of our cultures of origin.

In 2009, I was introduced to the work of a nonprofit organization invested in protecting biocultural diversity. The Global Diversity Foundation (GDF) first worked on projects in Morocco before expanding to other regions around the world. When I encountered it, the GDF program in Sabah was exploring how protected areas and Indigenous communities could converge to support both biodiversity conservation and sustainable livelihoods. This intrigued me. Biocultural diversity was a relatively new concept to me, one that pushes us to adopt an integrated perspective on the diversity of life and to holistically address the protection of natural and cultural resources. Through an online learning platform created by GDF, I read case after case on how environmental degradation is hastened by social, economic, and political pressures on Indigenous Peoples and the lack of recognition of their rights, thereby limiting their ability to steward their biocultural diversity and live well.

After taking on an official role with GDF, I met with the community research teams from Bundu Tuhan and Ulu Papar, two communities in a remote part of Sabah living at the periphery of Kinabalu Park and Crocker Range Park and surviving primarily as subsistence farming and fishing communities. They described some of the important work they had been doing in collaboration with GDF and other nonprofits and local government authorities, including marking and mapping out their landscapes to show forest types, land use, historic sites, and graveyards. Based on these maps, they developed a community protocol to document the importance of their way of life and culture, ancestral lands, and territories. The community research teams had conducted household interviews to learn how households relate to the plants, animals, and landscapes around them. They created short films to share the stories of their lives and the issues they face. They engaged with new audiences to share their findings and promote the unique biocultural values of their lands. I heard from Remmy Alfie, a community researcher from Bundu Tuhan, a village nestled at the foothills of Mount Kinabalu, about a community forest that occupies two-thirds of a 1255-hectare native reserve and is governed by his community through a village management plan. I trekked out to Kalangaan village in Ulu Papar where the Gayatas Stone stands erect, displaying marks that depict the number of enemy heads a fearsome female leader had taken. This stone is protected by the Ulu Papar people for its cultural and historical significance. 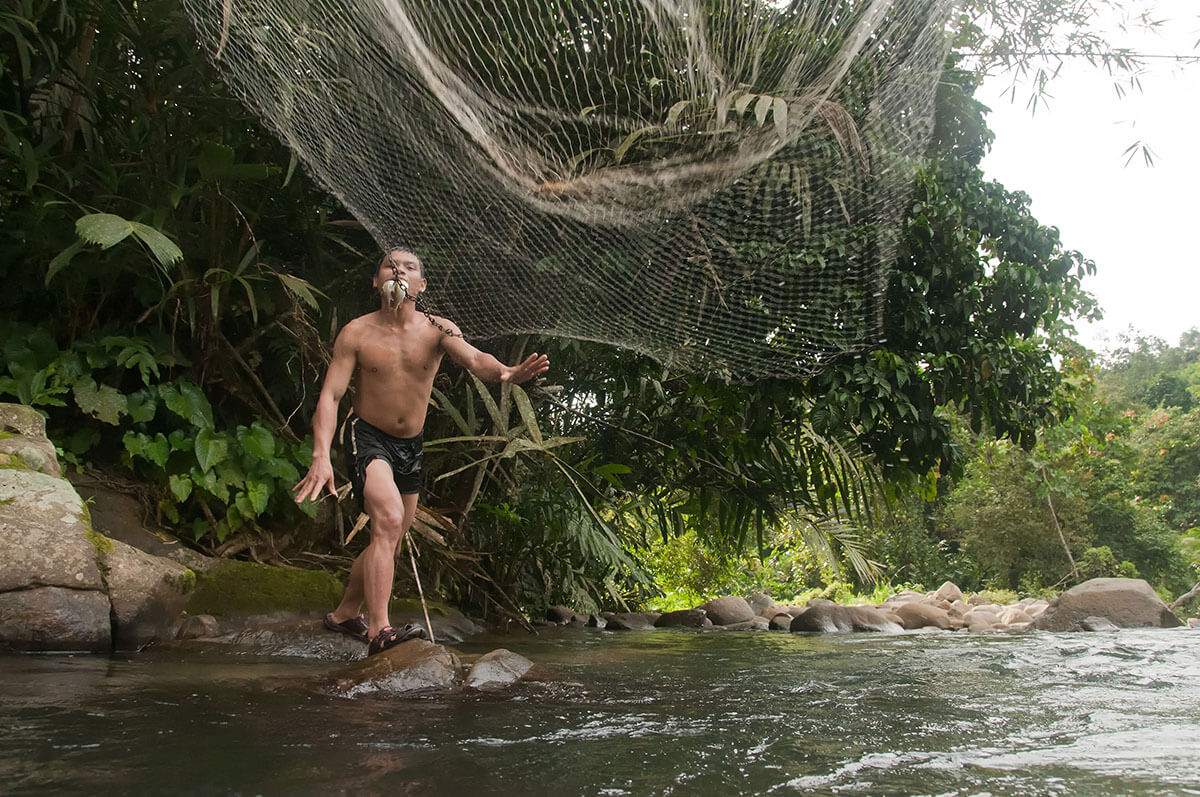 The Ulu Papar community still uses traditional equipment to fish from its rivers, an activity that has been passed down over generations. Photo: Inanc Tekguc, 2010 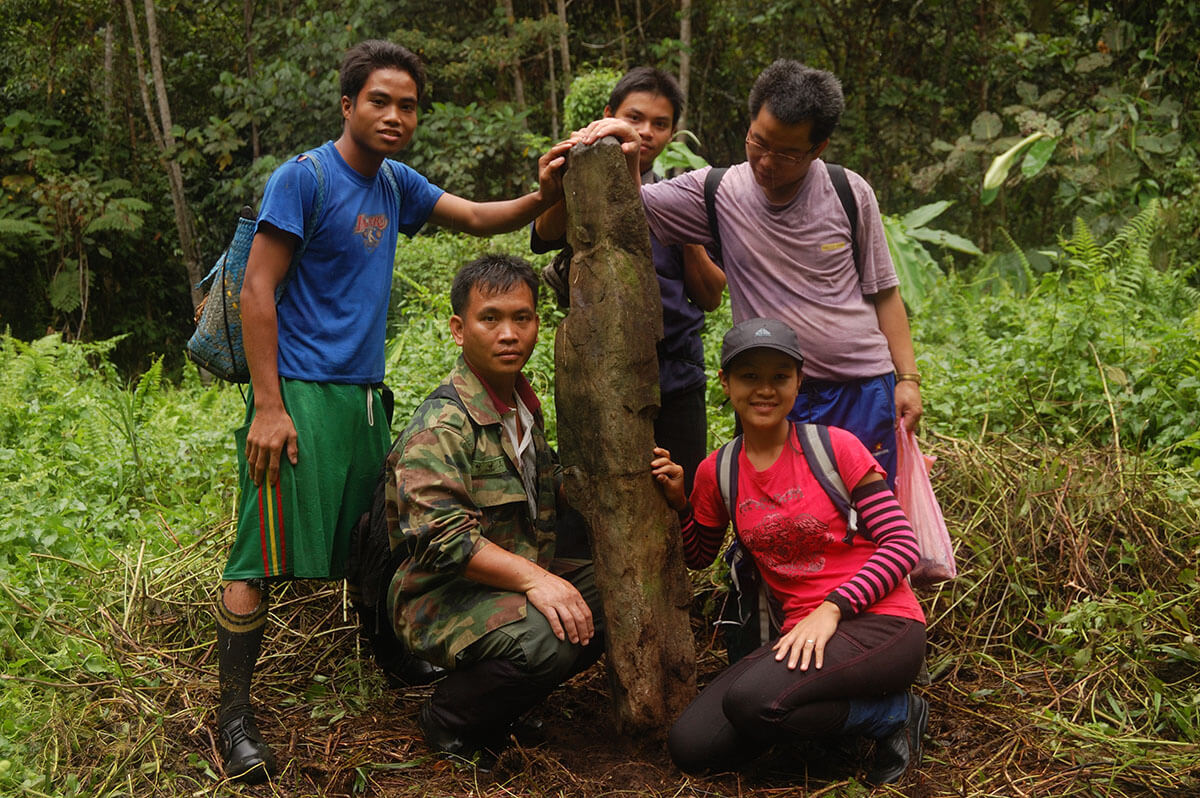 The Gayatas Stone in Kalangaan village bears the marks made by a legendary female warrior during wars long ago. Photo: Jenny Sanem, 2008

Unfortunately, as Jenny Sanem, an Indigenous Dusun from the community of Buayan, told me, the loss of local knowledge among the youth is very real. When she first started working as a community researcher in 2007, she admitted that although she was born in Buayan, she did not know much about it except that it is one of the nine villages collectively known as Ulu Papar. At the time, she was a 21-year-old who had moved away from Buayan to work as a shop attendant in Donggongon town. Jenny talked about her experience as a member of the Ulu Papar Community Research Team. Over the years, Jenny and her peers were trained in various research and outreach techniques, including photography and participatory videography (a community filmmaking approach), as well as household interview techniques and community mapping (including the application of GPS and participatory three-dimensional modeling). She spoke passionately about how these new skills enabled the creation of Ulu Papar Tales, a booklet published earlier this year that features nine oral histories and tales of strength, conflict, and peacemaking on Dusun territory as told by community Elders. The stories in Ulu Papar Tales—published in four languages—demonstrate their people’s long and continuous presence in the area. In essence, the booklet transformed Ulu Papar oral histories into the written word—a valuable contribution to the knowledge base of Ulu Papar. 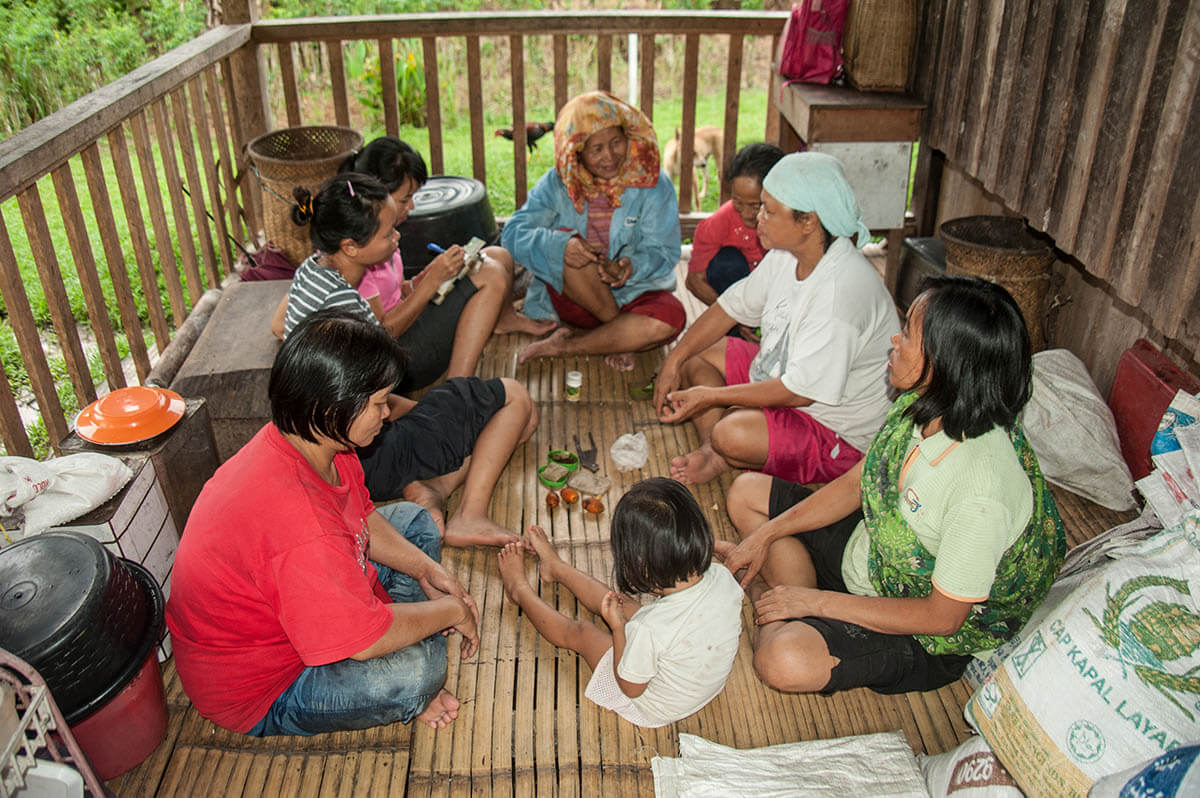 As an example of one of the tales, here Angeline Dingon from Buayan recounts an episode that led to peacemaking between villages:

“During a time of war between the villages of Kionop and Tiku, two brothers from Kionop, Sidui and Kadui, were known to be the strongest and most feared warriors. In Tiku, Lumingou and Binagal, also siblings, were the strongest; Lumingou was the elder of the two. Sidui and Kadui were eager to kill Lumingou and Binagal. One day, they traveled to Tiku River to spy on Binagal and Lumingou. When they reached the river, they saw Lumingou and Binagal walking together on their way to fish. But what they saw surprised them and they did not dare approach the duo: as Luminggou and Binagal walked along the river, the bottom of their feet did not touch any of the rocks. Kadui and Sidui hid themselves and watched quietly, letting Lumingou and Binagal pass them without making any contact. Kadui and Sidui returned to their village because they felt they were unable to match the strength of Binagal and Lumingou. They held a meeting and slaughtered a pig, agreeing not to fight anymore.” 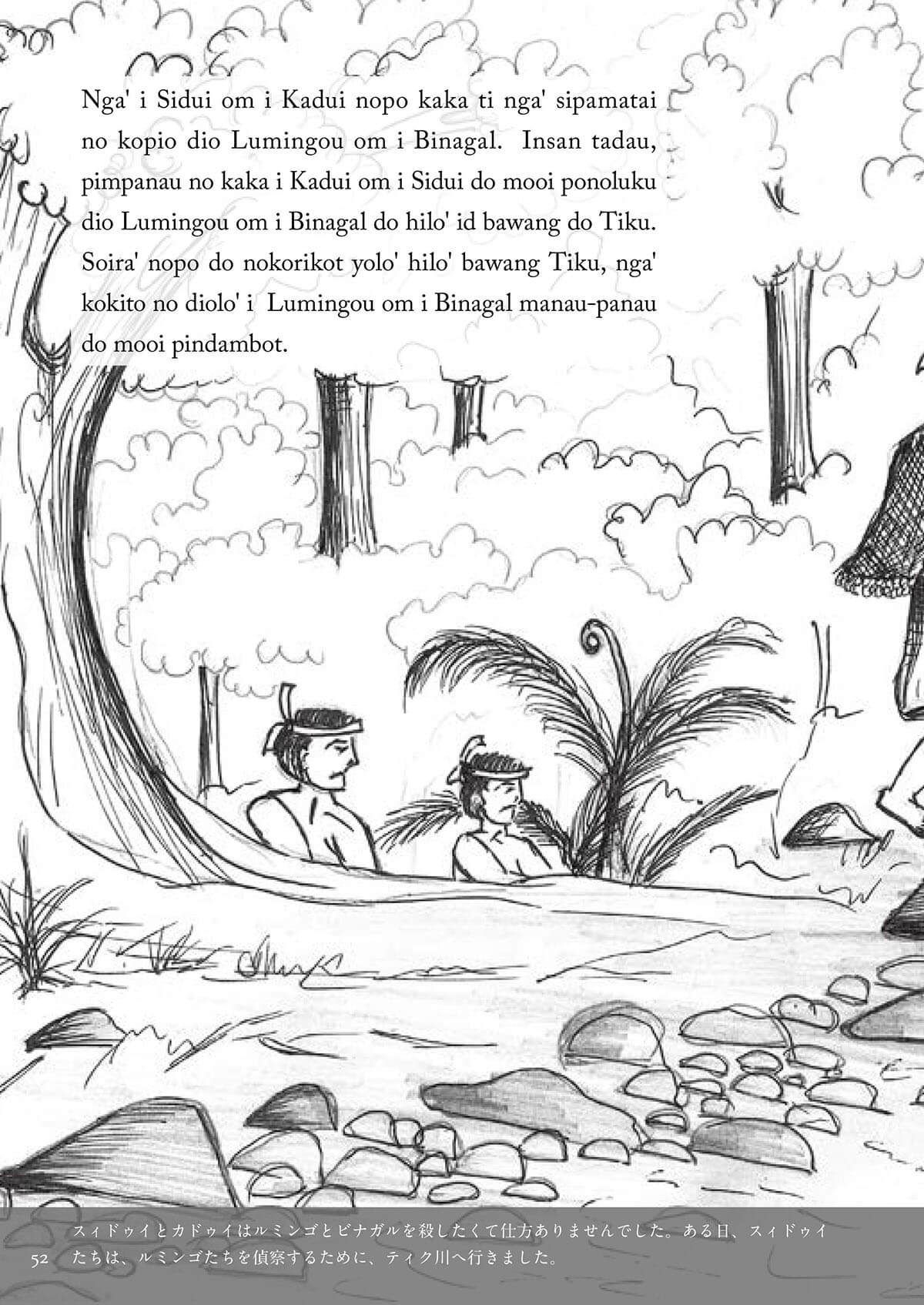 The training in outreach and advocacy skills, and eight years’ worth of information on resource use and cultural values, including the oral histories now published in Ulu Papar Tales, empowered Dusun communities in Ulu Papar and Bundu Tuhan to speak up. They reached out to local government agencies and civil society groups about the issues they face and, through structured workshops, became active participants in decision making on land use, including areas designated as community use, buffer and transitional, zones to Crocker Range Park and Crocker Range Biosphere Reserve.

Training in outreach and advocacy skills empowered Dusun communities in Ulu Papar and Bundu Tuhan to speak up.

It didn’t stop there. Some of the youth started their own projects. Supported by their village leaders, they took the lead in building a communally owned and managed resource and outreach center to promote the biocultural heritage of Ulu Papar. They re-energized a legally registered community group to provide formal grounds for them to take matters into their own hands and effectively engage with others who support the upholding of their traditional values.

Their voices have grown stronger. They continue to use the results from investigations of local resource use, valuation of landscapes, and Indigenous ecological knowledge. They have taken this work to the frontline of an ongoing struggle to save their ancestral lands against the destructive development of the Kaiduan Dam, a mega-dam proposed by the Sabah government that would flood the lands of most Ulu Papar residents, displacing and unmaking communities whose lifestyles and traditions are completely meshed with the place they have called home for so long. Through their own sheer determination, and with the help of friendly NGOs, I hope against hope that they are successful in this quest and that the communities who have stewarded the mountains of my beautiful homeland for millennia will continue to do so far into the future.

Marina Aman Sham started working with the Global Diversity Foundation in 2009 and, in her current role, showcases GDF’s work supporting communities as they improve their livelihoods while conserving their biocultural diversity. She also works with the Global Environments Network, a collective that promotes collaboration and innovation among emerging environmental changemakers.