There’s a tiny subculture of place-loving men and women who specialize in burning the land. “Prescribed fire,” they call it, though the term strikes me as arrogant; after three winters spent elbow-deep in the craft, lighting fires across the swamps and mountains and sandhill forests of Georgia, and despite the physical intimacy with which I came to know and love the landscape, I can’t say I understood it well enough to “prescribe” anything. “Intentional,” maybe, or “interpretive” burning seems more appropriate.

They called us “firelighters.” The job of my crew was to plan, prepare for, and execute fires of varying size, responding to the particular needs of selected tracts of land. We burned all over the state and traveled frequently in pursuit of good burning weather: winds in our favor, humidity within range, and the proper number of days since a good, soaking rain. Under perfect conditions, a human-lit fire can mimic natural wildfire’s role in regenerating soil and managing vegetation for ecosystem health.

Until fairly recently, fire was a shaping force on the southern landscape. Fire-adapted forests  —  many of them dominated by Pinus palustris, the longleaf pine  —  once covered some 92 million acres from southern Virginia into Texas. Within longleaf ecosystems dwelt a variety of equally fire-adapted organisms, including wiregrass, gopher tortoises, red-cockaded woodpeckers, and eastern indigo snakes.

Prior to human arrival on the continent —  starting perhaps as early as 16,500 years ago — lightning-sparked fires carried as far and wide as topography and weather would allow. There is archeological evidence that some of Georgia’s earliest residents saw the benefits of regular burning and eventually were able to harness fire. Fire cleared land for agriculture, attracted game, controlled insect pests, and made it easier to navigate thick brush for the gathering of nuts and roots. It is believed that, later on, European settlers learned the practice of intentional burning from these Indigenous groups and continued to light fires themselves. Frequent burning also served to prevent deadlier conflagrations, which threatened property and human safety. 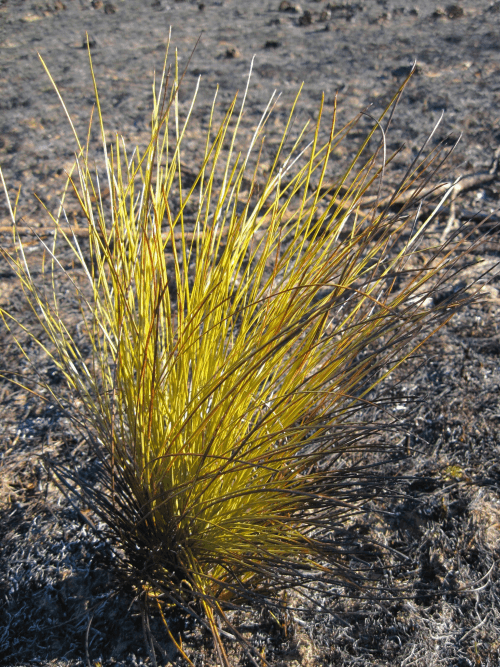 Fire’s universal appeal would not endure, however. The rise of the logging industry in the late nineteenth century deterred burning, as scorch marks would devalue timber. The golden age of logging coincided with an era of nationwide fire suppression. This led to a buildup of dangerous fuels; in 1910, drought sparked raging wildfires which spanned from the northern Rockies to New England, burning millions of acres and killing eighty-seven people.

What was once a common practice — burning the woods — had become anathema. In the late 1920s, “Dixie Crusaders,” a group sponsored by the nonprofit American Forestry Association (now American Forests), traveled across the South distributing pamphlets and film propaganda highlighting the dangers of intentional burning. The US Forest Service hired a psychologist to study why Southerners set fires; in his results, Dr. John F. Shea discredited the cultural, historical, and ecological importance of burning, reporting that locals would set large-scale fires merely for entertainment “in an environment otherwise barren of emotional outlets.” During World War II, the US Forest Service worked with the War Advertising Council (known today as the Ad Council) to conjure fire suppression’s most beloved name and face: Smokey Bear.

Forestry and conservation science gradually came to embrace the role of fire, but by then much damage had been done. Fire suppression had changed the makeup of southern forests, allowing the incursion of hardwoods less likely to host similar levels of biodiversity. Today, only about five million acres of old-growth longleaf pine forest remain in the United States, most of it in non-contiguous patches. In attempts to restore fire’s regenerative effects on the landscape, Georgia began a prescribed fire program in the 1950s.

After three winters of fire I did, to some degree, learn intentional fire’s most important lesson. To light a healing fire, I needed to think and act like fire.

I first came to Georgia just after Thanksgiving 2010, new to the state and to the South and an absolute novice when it came to fire. I was eager from the start to get things right, to master this hot new tool and shine at the top of my class. None of that would come to pass.

That first season unfolded as a series of mishaps and worse: broken equipment, bits and pieces lost in the woods, navigation mistakes, moments of sheer terror. My second winter didn’t go much better: I upended a four-wheeler, melted a radio, sidelined a couple of chainsaws, and became known for my tall, reckless flames. The third time around I was still making mistakes: I snapped a cable on another four-wheeler, chewed up the wedges we use for felling trees, over-fired sensitive vegetation in the burn unit at Kolomoki Mounds State Park. But mistakes be damned, after three winters of fire I did, to some degree, learn intentional fire’s most important lesson.

To light a healing fire, I needed to think and act like fire. I am a systematic, organized person, eager to strategize, to know and follow guidelines, but fire calls for sensory instinct and muscle memory rather than book learning. Toward the end of my career, I heeded the advice my teachers had offered up from the beginning: let go of your books. Open your eyes. Learn a different syntax. With fire there are no “yes or no” answers, no hard and fast algorithms — just scenarios and possibilities, and instinct that grows through mistakes: by over-firing, under-burning, testing out ignition patterns in varying winds. By witnessing the interaction of two equally wild elements: landscape and fire.

First, I learned to read landscape, to interpret southern ground, to look ahead at what lay before me and reference past learning so as to understand what sort of fire each plant community or fuel type might require. Infant longleaf pines might not yet be ready for heat and flame; the same goes for pines that are “candling,” putting forth their springtime growth. Mature trees with rings of “duff,” or leaf litter, at their bases call for a light touch with fast-moving fire, as such piles can catch and harbor flames long enough to fatally bake even sturdy pines by the roots.

Next, I learned to read fire. I witnessed its behavior in repeated trials and dabbled more intentionally with its application. Fire behaves in certain ways when it interacts with environmental factors, such as slope, wind speed and direction, relative humidity, and fuel type. Fire also interacts with fire, as when two flames bend toward each other, or when fire skips an already-burned patch now devoid of fuels. A practiced firelighter can play these effects off one another: for example, lighting at the base of a hill knowing that wetter fuels or countering winds will temper the inevitable uphill run.

When I light fire, I commit a landscape to an uncertain future dependent on my skill in reading terrain and applying my chosen medium. A firelighter’s first intimacy is with the land; only then can she reckon with the paintbrush. Firelighting is an art that, when practiced with scientific rigor and replication, demonstrates the very fallacy implicit in dividing the two disciplines. Isn’t there always some repeated trial, some rigorous observation involved in good craftsmanship? And is good science ever entirely devoid of the attention or curiosity of the artist?

What would Georgia be without fire, I wonder. Absent fire, absent its transformative capacity, absent the awe and clarity it inspires, what would happen to us — to firelighters, to southerners, to humanity?

When we think about biocultural diversity — the connection and interplay between variety in human language, culture, and experience and variety in geosphere, atmosphere, and biosphere — we must consider not only the biological, but also the elemental. How holy, how messy, how humble the experience of firelighting, of attempting to recreate both cultural and natural forces, subject always to the undulations of wind and terrain.

Hilary Vidalakis is a writer and environmental educator living in New York City. Past, beloved homes include northern Yellowstone, southeastern Utah, western North Dakota, and the state of Georgia. Moving to the city from more recognizably “wild” environments was a challenge, yet she is coming to discover and appreciate “nature” in hidden urban corners.

The Longleaf Alliance. (2017). About Longleaf. Retrieved from http://www.longleafalliance.org.