To the Roots: A Maya Reunion

A film by Steve Bartz

We present this film by the late filmmaker Steve Bartz as a complement to Jim Nation’s story. Shot in 1998, the film chronicles a historic encounter between the Lacandón Maya and a group of Itza Maya visiting from Guatemala. The two peoples are linguistically and culturally related, but the circumstances of colonial history had long separated them. The two groups were joined by conservationists—Jim among them—who were working in the region to protect the rainforest from logging, ranching, and other external pressures. In that moving encounter, the Lacandón and Itza discovered not only their common roots but also a shared determination to meet the challenges that threatened (and still threaten) their forest home and ways of life. The film is a beautifully shot, deeply empathetic account of that memorable event.

In that moving encounter, the Lacandón and Itza discovered not only their common roots but also a shared determination to meet the challenges that threatened (and still threaten) their forest home and ways of life. The film is a beautifully shot, deeply empathetic account of that memorable event.

Sharing this video with Langscape readers is also meant as a tribute to Steve, a long-time friend and supporter of Terralingua, who passed away suddenly in 2020, at age 54. In 1996, Steve—then a young filmmaker who had already garnered major recognition for co-producing (with Jaime Kibben) the film In Good Hands: Culture and Agriculture in the Lacandon Rainforest—had agreed to film the entire proceedings of Terralingua’s inaugural event, the international working conference “Endangered Languages, Endangered Knowledge, Endangered Environments,” held at the University of California, Berkeley (UC Berkeley). Subsequently, we worked with Steve to assemble a small biocultural diversity film festival that showcased To the Roots and several other documentaries about Indigenous Peoples from around the world engaged in defending their languages, cultures, and lands. In 1999–2000, we brought this festival to three major venues: The Field Museum of Natural History in Chicago, the Smithsonian Institution in Washington, DC, and the Berkeley Natural History Museums at UC Berkeley. It was Terralingua’s first foray into presenting the idea of biocultural diversity to a non-academic audience.

We are able to show the film thanks to the generous permission of Steve’s brothers, Robert and Richard Bartz, and to Jim’s effort in making a digital copy of the video available to us. The video’s grainy quality shows the passage of time, but the events are timeless. Together, Jim’s article and Steve’s film tell a story of enormous challenges, extraordinary resilience, and strong determination—a story that is common to Indigenous communities worldwide. 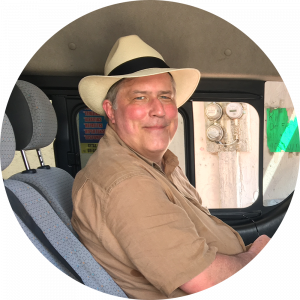 Steve Bartz (1965–2020) was a documentary filmmaker with a passion for issues of Indigenous Peoples, conservation, and sustainable development. He produced about twenty documentaries and educational videos, including In Good Hands and To the Roots, both focused on the Lacandón Maya of southern Mexico. He held a master’s degree in Latin American Studies from UC Berkeley.