“Nature is painting for us, day after day, pictures of infinite beauty if only we have the eyes to see them.”   — John Ruskin

I want to tell you the story of a Japanese craft that impressed me for its deep connection with the culture and customs of the people. As a regional planning researcher, my attention was first drawn to this craft because of its ability to forge local identity and contribute to the resilience of local communities. Then I started practicing the craft myself  —  and, as I gradually learned the symbolic meaning of its elements, I began to feel that the practice might help regain a lost connection with nature by revitalizing traditional environmental knowledge. The craft seems to have a “biocultural code” inscribed in it, which people can learn or relearn to read.

The roots of Japanese people’s relationship with nature are found in Japan’s two main religions: Shintoism, which is close to shamanism, and Buddhism, with its reverence for all living creatures. Japan’s frequent exposure to terrible natural disasters also contributed to the development of a peculiar mix of spiritual reverence for nature and superstitious fear of it.

During the Heian period (794–1185), however, urbanization and the consequent alienation from rural nature gave rise to a “romanticized” and “poetic” view of and affinity for nature among the aristocracy, which later spread to commoners. One of the ways in which the commoners’ view of nature found expression is the tsurushibina craft. Tsurushibina translates as “hanging doll decoration.”

The craft arose around the celebration of the important spring festival known as Hinamatsuri (Girls’ Day), which is held to pray for the health and happiness of girls. During the festival, the nobility would exhibit expensive dolls that portrayed sitting figures of the Emperor, Empress, courtiers, and musicians. As a more affordable way for commoners to celebrate, mothers and grandmothers started using scraps of kimono silk to make small hanging figures of plants, animals, and household items that had a symbolic protective value for girls. In so doing, women also transmitted traditional knowledge from one generation to the next.

From the Edo period (1603–1868) on, the tsurushibina craft became a widespread tradition in popular culture, but it went into decline with the advent of the industrialization era, just like everything else considered to be “old-style.” It took a long period of economic crisis in Japan, starting in the early 1990s, along with a growing concern for environmental issues, to revive the craft. People started remembering the old Japanese concept of avoiding a wasteful use of resources, which was expressed in the word mottainai (translating more or less as “don’t waste”). Making tsurushibina figures from silk scraps was in line with those environmental concerns, and the craft began to flourish as a popular activity once again. 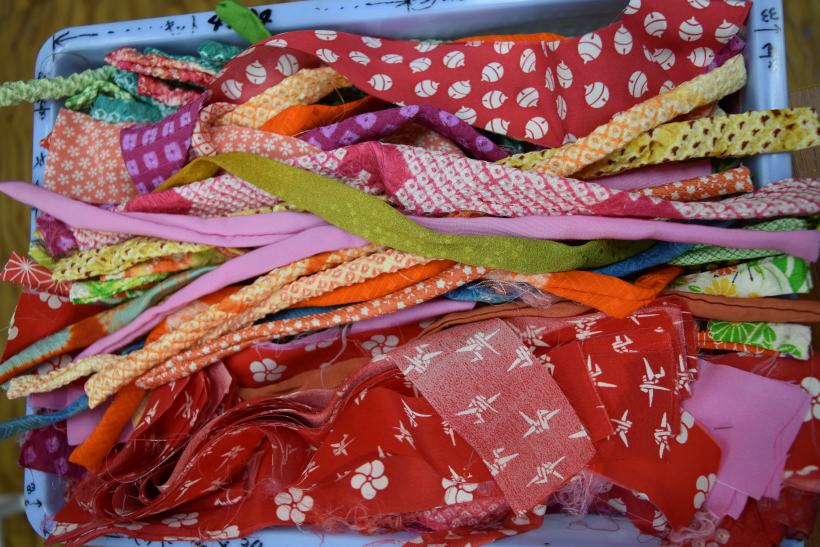 My research brought me to Higashiizu town — one of the three places in Japan where the hanging doll ornament craft originated and developed in a unique way. There I observed the Girls’ Day Festival and interviewed local craftspeople about the meaning of the craft. My observations led me to conclude that most of the fruits and vegetables featured as motifs in the hanging decorations are commonly used in daily life and that plenty of them have medicinal properties.

Urbanization and the consequent alienation from rural nature gave rise to a “romanticized” and “poetic” view of and affinity for nature.

The main plant associated with the Girls’ Day celebration is the peach tree. Flowers, seeds, fruits, and leaves of the peach tree are widely used in Chinese medicine (many elements of which were adopted into the Japanese herbal medicine system known as Kampo) for the purification of the female body and the treatment of various diseases. The most valued healing property of the peach seed is its effect of promoting good blood circulation. In particular, it can be applied to treat scarce menstrual flow or even absence of menstruation in women.

Another good example is the red pepper. It keeps insects off, so it is supposed to drive undesirable lovers away from young women. Among plants with a medicinal use, typical ornament motifs are also camellia, plum, and chrysanthemum.

This huge variety of motifs is associated with distinctive symbolic meanings, which may be conveyed by physical characteristics such as color or shape, or even by intangible connotations such as wordplay. Let me give you some examples.

Tsurushibina decorations are dominated by the color red, which is believed to repel evil spirits. Some of the ornamental elements are associated with proverbs about the color of fall fruits, which are supposed to bring health. One such proverb goes: “When persimmons turn red, doctors turn blue.” The season in which these fruits are eaten results in fewer patients, so that doctors worry about losing their jobs and get pale faces. This Japanese proverb has similarities with the English one: “An apple a day keeps the doctor away.”

A bifurcated radish (futamata daikon) has a shape reminiscent of the the legs in a human body. Usually farmers do not eat such radishes when they find them in their fields, but instead bring them to a roadside shrine, praying for healthy legs. In addition, the resemblance of a bifurcated radish to a woman’s body makes it a symbol of fertility. This kind of radish is called a “bride of Daikoku,” Daikoku being one of the seven lucky gods. Radish has a detoxifying property and is widely known for its beneficial effect on the human body. An old proverb says: “Eating pungent radish and drinking hot tea will leave starved doctors begging on their knees.”

Left: The red fish is a kinmedai, or splendid alfonsino, considered an auspicious sign and used in celebrations. Also visible is a red persimmon. 2017. Middle: Craftswoman Saito-san from Higashiizu shows a Girls’ Day Festival altar in her house. The red color dominates. 2017. Right: Bifurcated daikon radish. 2017

Clam shells are symbols of fidelity, as two valves make a unique match. Some of the animals — for example, owl and sparrow — have a round shape, a concept expressed by the word fuku, which sounds the same as the word for “good fortune” (also pronounced fuku).

Okada san, a local craftswoman of Higashiizu, told me that plenty of symbolic meanings come from Japanese tales, proverbs, and forms of wordplay such as homophones, as in the case of fuku above.

Commonly known as nandina, heavenly bamboo, or sacred bamboo, in Japan as well as in China the nanten plant symbolizes a sacred celebration. The sound of the plant’s name is homophonic with nan wo tenzuru, or “hardship reversal.” Additionally, the dried berries are used as a remedy for cough in traditional Chinese medicine, whereas tonics derived from the roots are used for eye conditions, flu, muscle pain, rheumatism, fever, and gastrointestinal illness.

Drawings of the red berries of a nanten plant, a common tsurushibina ornament, and of an ornament representing the berries. 2017

From my interviews with practitioners of the tsurushibina craft, I drew the impression that they do not consciously attach special importance to how knowledge about nature can be learned from this craft. They do reach into it unconsciously, however, learning the protective symbolism of the figures while creating beautiful natural patterns.

Back to Vol. 6, Issue 2 | Read the Table of Contents | Like Our Stories? Please Donate!

Mariia Ermilova is pursuing a PhD degree in Landscape Planning at Chiba University’s Graduate School of Horticulture, Japan. Part of her research focuses on the links between arts and crafts and citizens’ knowledge and perception of their natural environs. As an artist, she sketches urban scenes and traditional Japanese crafts. Read more from Mariia Ermilova.

Murguia, S. (2011). Hinamatsuri and the Japanese female: A critical interpretation of the Japanese Doll Festival. Journal of Asia Pacific Studies, 2(2), 231–247.