Visions from Within: Another Shot for Biocultural Conservation in the Cradle of Humankind

Text and photos by Thor Morales 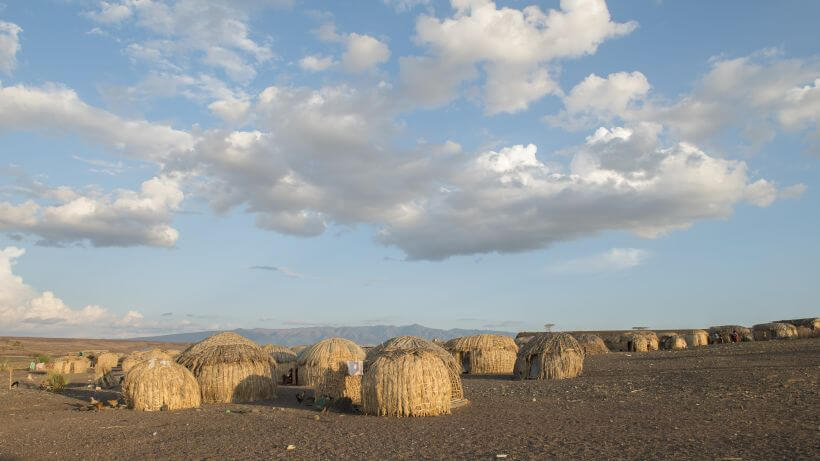 The beautiful village of Layeni, one of the three El-Molo villages around Lake Turkana. 2016

Imagine you’re in the cradle of humankind. Cultures similar to yours have thrived in a seemingly barren, rock-strewn desert for thousands of years. But now, once frequently practiced rites, ceremonies, and traditions are losing vigor, and your mother tongue is falling by the wayside as you adopt a new one from a neighboring tribe. Your environment is still there, your people too, but the culture is rapidly fading away. And every other ethnic or cultural group in the region faces the same predicament. Borders appeared and cross-border migrations were banned for political security reasons. The world has changed so much, that it is wreaking havoc with your way of life and driving the younger generations away from their roots.

How can you help keep your biocultural practices alive while there’s still time? There are many possible ways, but suddenly, one you never thought of is at hand. A videocamera? A computer? That is only for educated people! It’s too difficult for me; I’ve never even touched one; I don’t speak English. These and other thoughts might come to your mind. That’s before you experience the magic of participatory video.

In 2016, I met wonderful people, deeply committed to their communities and culture, in the northern desert of Kenya: the Gabbra, Borana, Konso, and El Molo peoples. During two visits, I spent almost a month working closely with them on the use of cameras and editing software and learning with them about how these tools can help in their struggle for biocultural continuity.

Yet none of our expectations were fulfilled. Let me explain: participants were expecting a regular musungo (white person) who would teach a boring class about extremely complicated equipment. They were sure it would be a drag. The professor (that’s me) won’t even stand the heat or the food, thought my colleagues from the local NGO that helped coordinate the training. For my part, I was expecting that language would be an almost insurmountable barrier to the success of my facilitation task. 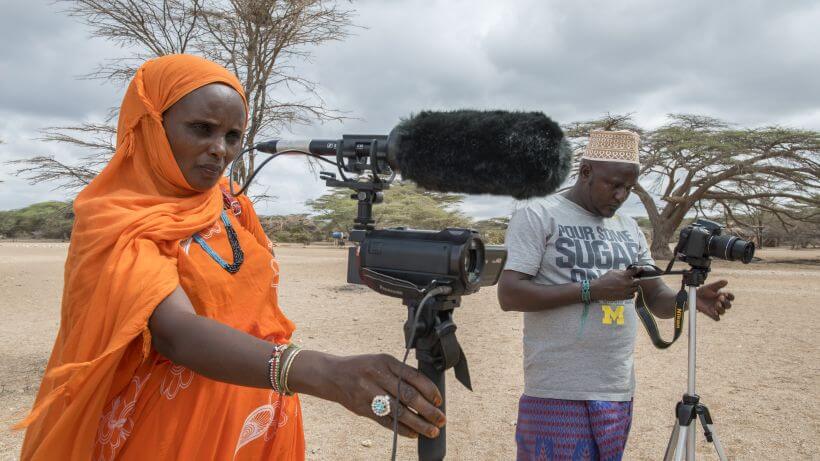 Mama Elema Molu, from Marsabit, came to the training fearing she would be left aside for being illiterate. As it turned out, she rapidly learned to use the camera and directed several shots during practice days. 2016

After ten minutes together, though, we all realized things would go far better than anyone had expected. We spent every day laughing, learning, teaching, and creating. Language, cultural, and ethnic barriers melted away and, as one of the ladies said, “We became one family.” Through peer-to-peer learning and practical exercises, the ten participants rapidly acquired filming, sound recording, and visual storytelling skills. They went from never having touched a camera to being confident and creative participatory video filmmakers.

A new form of resilience is being crafted through the use of video, using modern gear to revive the past and keep it going in a new but authentic way. 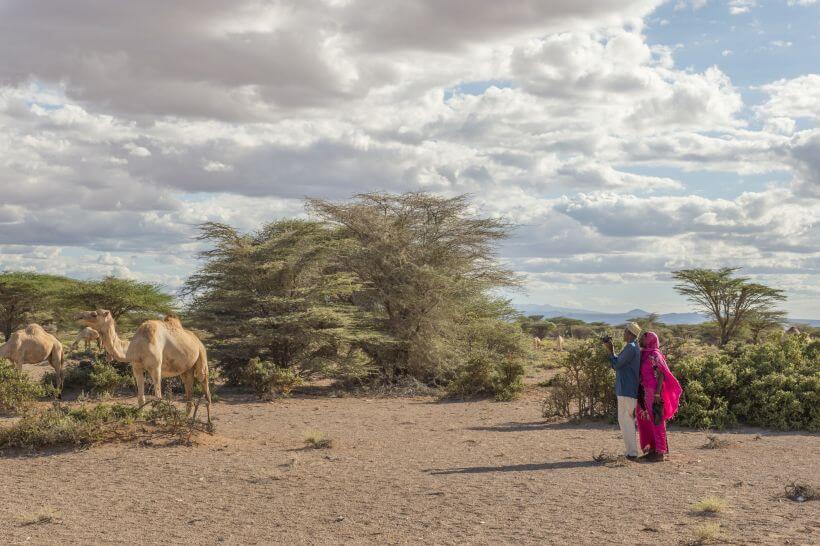 Participants during a filming practice. They learn not only how to use and handle the camera but also how to frame images. 2016

When participants set out to define the topics for their videos, the binomial of nature and culture came up top as the preferred choice. They all realized that their cultural practices are vanishing as younger generations lose interest in their traditions and rituals. Every participant’s first thought was to engage in a sort of salvage filming to record all current rites, festivities, traditions, and cultural activities. When the time came for community screenings, I witnessed people stay on in spite of approaching rain and a sand storm just to be part of the movie nights. Something magical happens when videos made by and with members are screened for the featured “actors”: from laughs to critiques, from amusement to active participation. New ideas are born; the need to document and record cultural activities is suddenly apparent. The fact that your neighbors are able to operate a camera and edit a video changes the way communities feel about being filmed (and screened). It makes more sense; it’s an option for real cultural resistance and not a mere way of pleasing foreigners in exchange for some money. 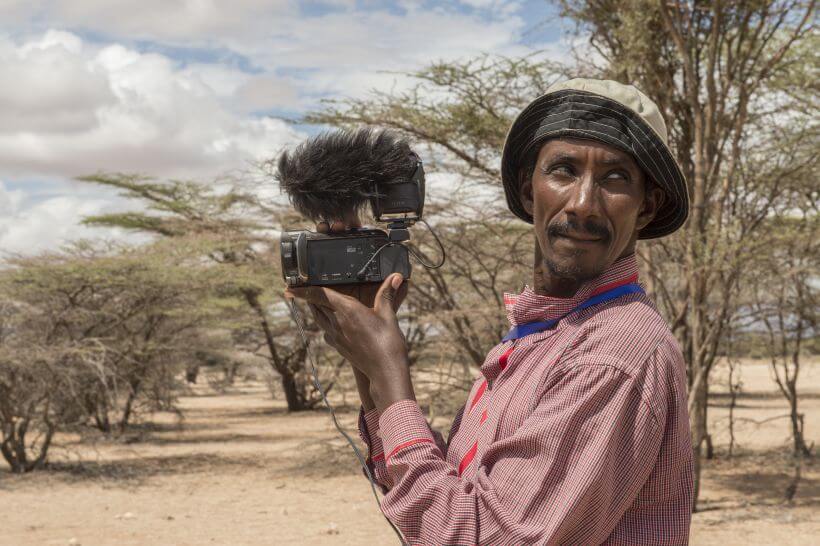 Dub Kanche checks whether everything is OK with the audio. Another teammate monitors sound before and during recordings. 2016.

From traditional naming ceremonies to weddings, from annual rituals to sacred sites, from cultural festivals to political events, the ten participants in this magical process have been filming their communities’ lives since 2016. In the process, they have raised awareness and interest in culture and nature, encouraged general participation, and given back to their communities. A new form of resilience is being crafted through the use of video, using modern gear to revive the past and keep it going in a new but authentic way. 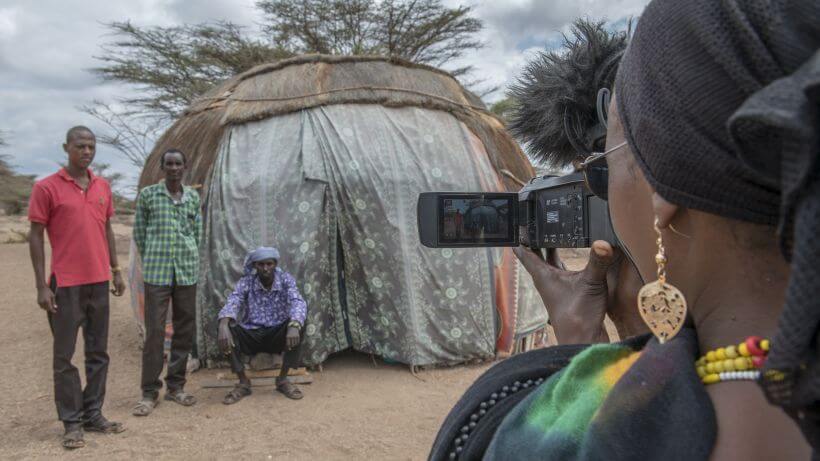 Qabale Diba holds the camera while the three men in her team perform a sociodrama about how eliciting traditional knowledge raises questions and reveals the need for free, prior, and informed consent. 2016

Participatory video allows for a true vision from within. There’s no outside guidance on what to film: it’s the community that decides, along with the participatory video team, what to focus the camera on. Even aesthetics are specific to the cultural group using the camera. In our northern Kenya experience, I can say the camera has traveled all the way to the past and back. In their villages, participants have convinced elders and shrine owners of the importance of using video as a tool for biocultural revival, and have filmed the last stewards of their culture. Through their eyes, hearts, and camera lenses, participants have found a new way to look at themselves, at their own people. At the same time, they have shown parts of their homelands only known to a few. 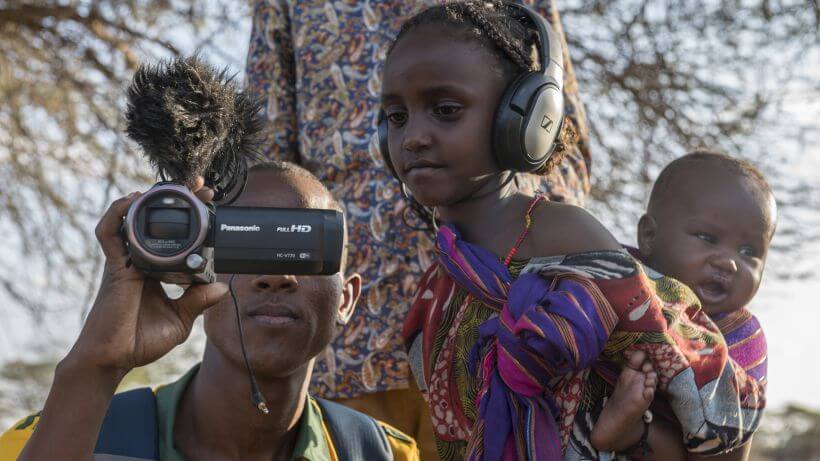 Hussein Abdi, the youngest participant in this adventure, shares footage with Soba, the young girl babysitting Qabale’s son so she could take part in the training. 2016 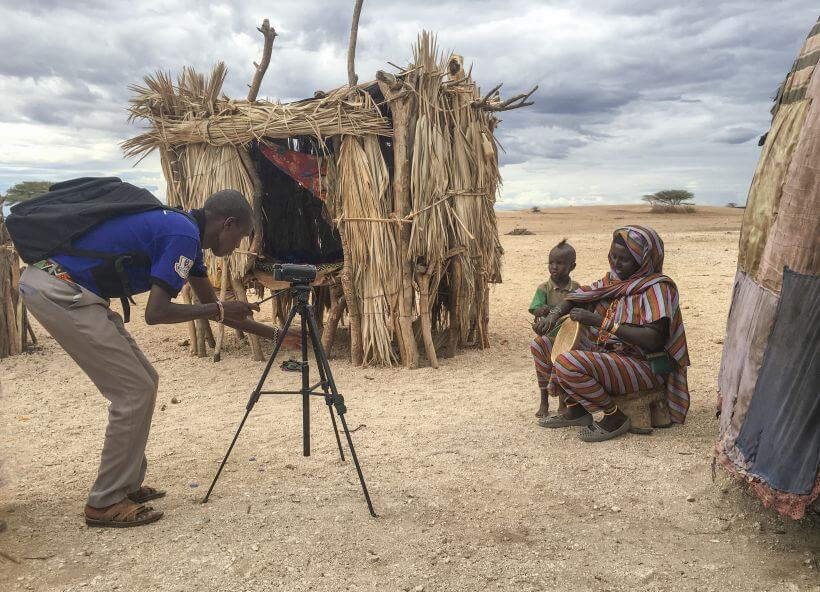 Magella Lenatiyama marvels at the work of Bone Dub Kanche. Despite being neighboring tribes, El-Molo and Gabbra hardly have any interaction. Through participatory video, we seek to connect these and other tribes in Northern Kenya. 2016 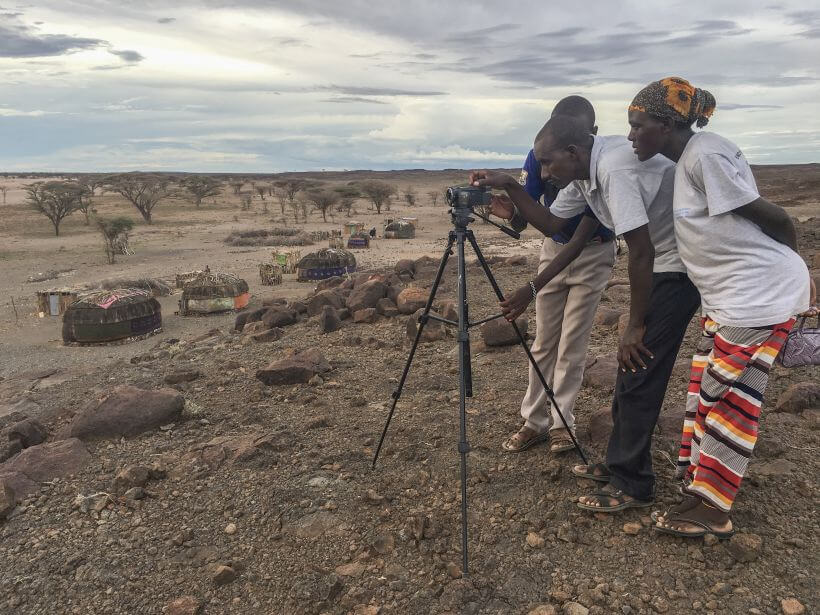 Participants view a Gabbra village from a neighboring mount. The use of participatory video offers another angle on daily life and familiar spaces. 2016 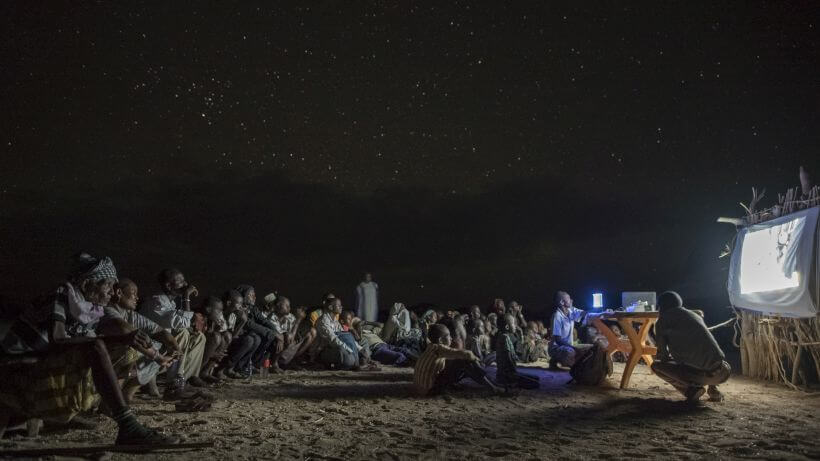 A community screening in the middle of the Chalbi desert. At Arrankesa, the whole village gathered together under the starry sky to watch and then talk about the participatory video films in which many of them had been featured. 2016 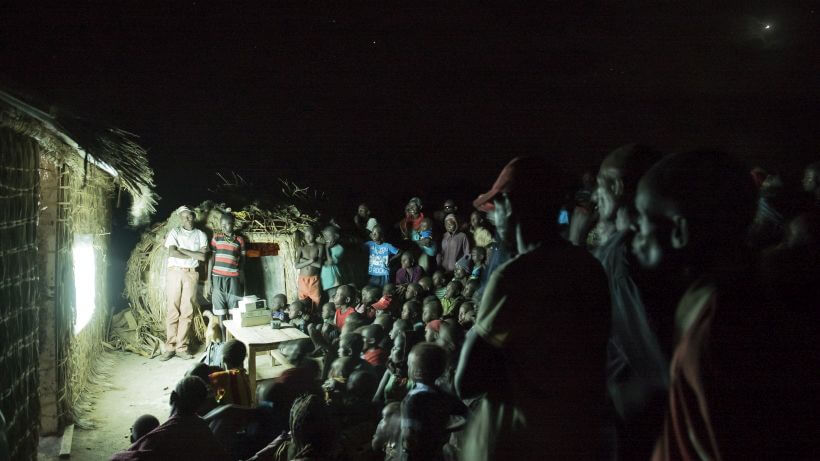 Dwellers of Layeni withstand a dust storm to watch the new films being screened by The Gura Pau (El-Molo) participatory video team. People are getting used to these movie nights in which they watch what the team has filmed and can discuss what else should be documented or talked about through video. 2016

Thor Morales is a biologist passionate about audiovisual media, Indigenous communities, nature, and cultures. During the past six years, he has been making a living by using cameras either for documentary work or participatory video training. He sees video as a powerful tool that can be used to create a better world.

Lunch, N., & Lunch, C. (2006). Insights into Participatory Video: A Handbook for the Field. Retrieved from http://insightshare.org/resources/insights-into-participatory-video-a-handbook-for-the-field/