We Feed the World: Photographing Traditional Knowledge in the Kalix Communities of Northern Sweden 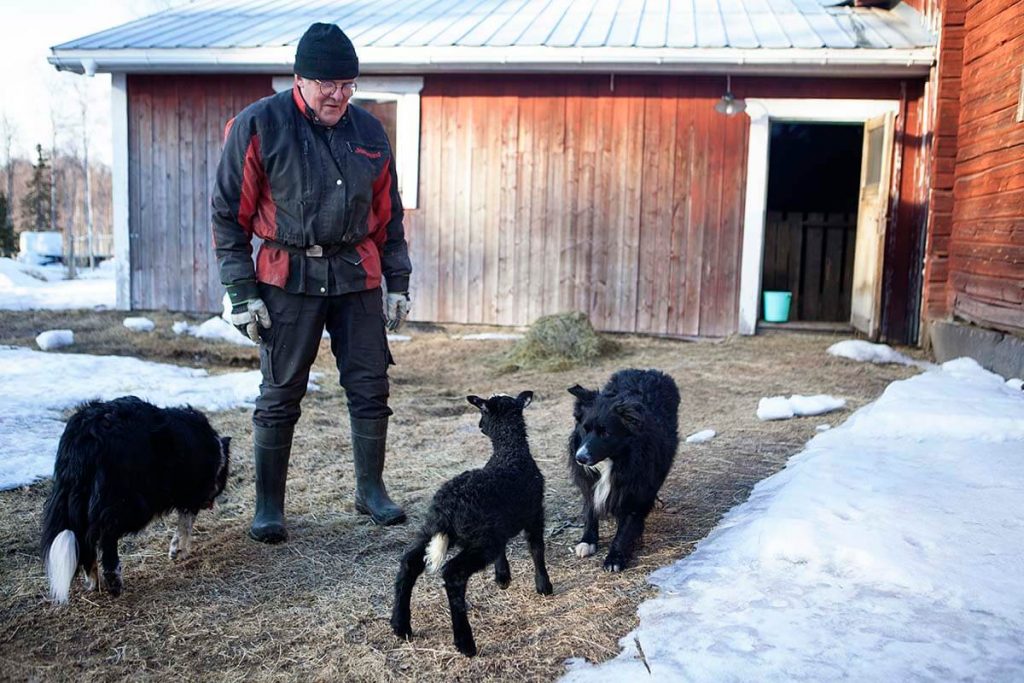 Peder Nilsson with two of his dogs and a lamb on his farm on the island of Brudholmen.

We Feed the World is an international photographic initiative hosted by the Gaia Foundation. For the last thirty years, Gaia has worked with Indigenous communities to preserve local knowledge and enhance community ecological governance in order to revive biocultural diversity, regenerate healthy ecosystems and food systems, and build resilience to climate change. The We Feed the World project is a unique collaboration of renowned photographers, NGOs, and civil society groups (including La Via Campesina, GRAIN, Groundswell International, Global Greengrants, the African Biodiversity Network, and others) to celebrate the role of small family farmers in feeding seventy percent of the world’s population.

The We Feed the World project celebrates the role of small family farmers in feeding seventy percent of the world’s population.

Through a series of international exhibitions, a book, and a poster campaign, the initiative seeks to reach out to a global mainstream audience and replace the narrative of the “poor family farmer” with a clearer understanding of their resilience, their diversity, and their overwhelming success, despite the many challenges they face. We Feed the World also aims to highlight the many benefits that agroecology offers our troubled planet—from cooling the climate to restoring biodiversity. 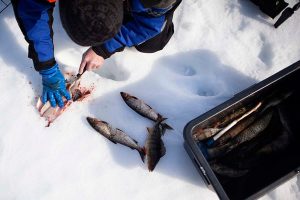 Joakim cleans and opens the whitefish, preparing to grill them over an open fire in one of the fishing huts in the bay’s outer archipelago, where the fishermen are allowed to go.

In May 2016, We Feed the World visited Kustringen in the far north of Sweden. This is a cluster of three fishing villages at the mouth of the Kalix River, which empties into Bothnian Bay, the northernmost part of the Baltic Sea near the Arctic Circle. People here, who speak Kalix—a traditional Swedish dialect with roots in Old Norse that is barely understood by anyone else—have fished with nets in shallow waters and traded their catch with one another for centuries. All this is changing, however. The Swedish authorities, acting on new European Union (EU) legislation, have banned net fishing in depths of less than three meters or any form of commerce outside that regulated by law. For northern communities, this is a major blow. Not only does it take away a traditional source of both food and income, but also it alienates people from customs and traditions that have been a part of their way of life for many generations.

The communities are now coming together to demand that the Swedish authorities recognize their role in stewarding the landscape and successfully maintaining fish supplies in the area for hundreds of years. This achievement is based on Indigenous knowledge that goes back as least as far as the fourteenth century. That knowledge, however, has been transmitted largely through lived experience and is not easily expressed in language—particularly when it comes to conveying it to outsiders in standard Swedish. Finding the right words is proving to be difficult. One of the village Elders, Peder Nilsson, has spent the last three winters trying to “translate” the local know-how, but says, “It’s not easy to put in words the difference between our local knowledge and scientific knowledge.”

To facilitate communication of that Indigenous knowledge through visual rather than verbal means, our photographer Clare Benson spent a day with Peder and other local fishermen on the ice in the Bay of Skärsfjärden, documenting their traditional way of fishing. 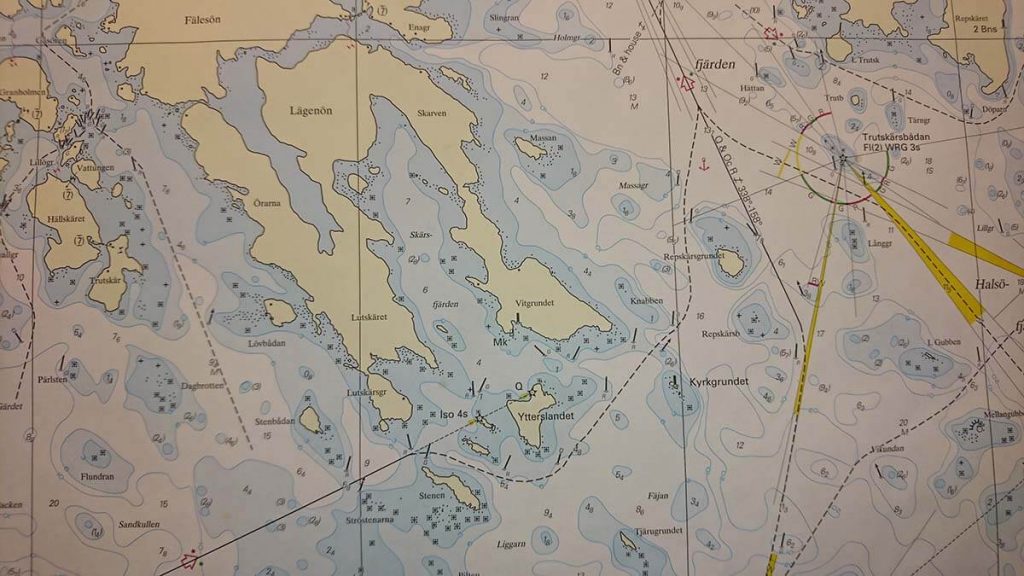 Marine chart showing a small portion of the Kalix archipelago in northern Sweden, around the Bay of Skärsfjärden. 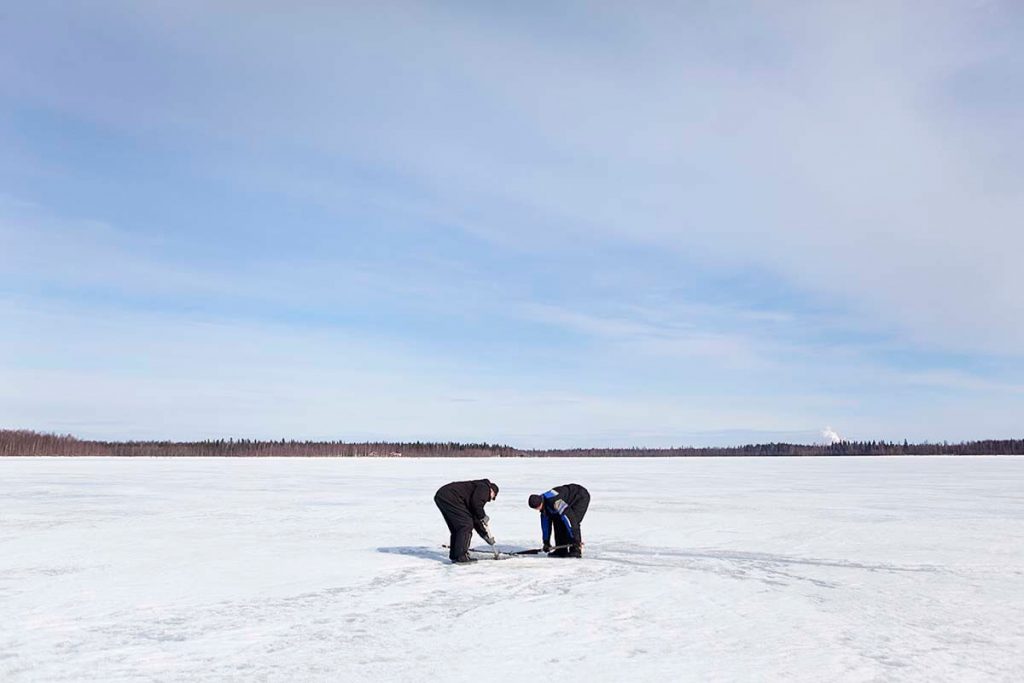 Lutskärsgrund is a fishing camp in the outer archipelago at the southern edge of the Bay of Skärsfjärden. All place names in Kalix are connected to nature and give a description of what is growing in that place or how that place can be used for certain activities. While standard Swedish has one word for ice, people here have many, depending on the quality of the ice and what is happening to it. One community member could list at least seven different words, and another could think of as many as twenty-two! 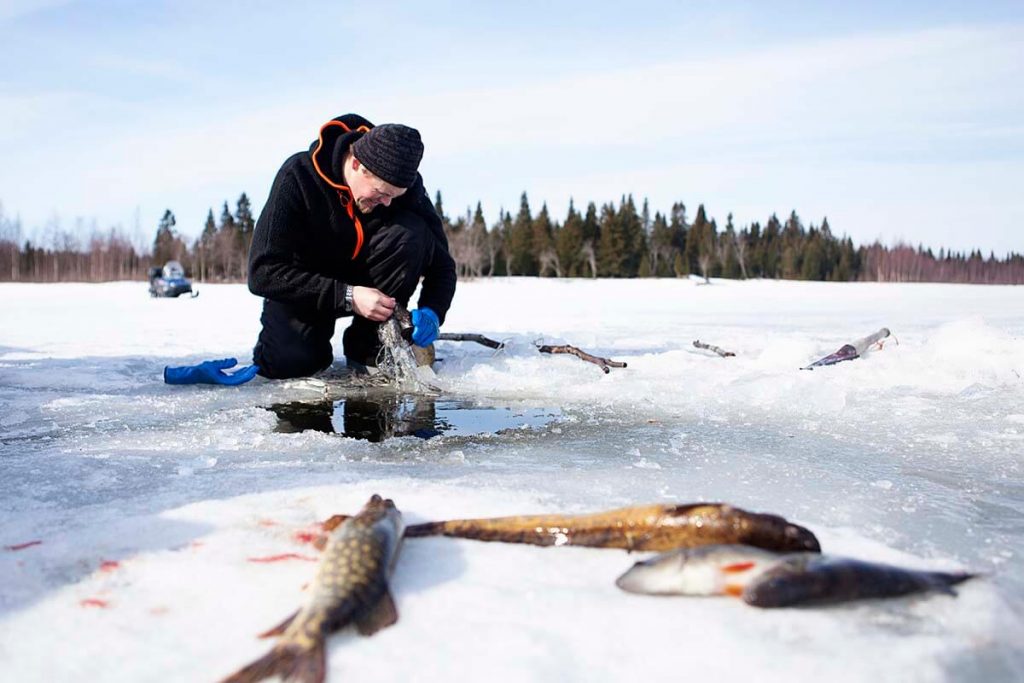 Fishermen like Joakim Boström and his father Hasse Boström have set nets in small holes to fish for pike, perch, and burbot for many generations. Most families in the area have multiple sources of income including fishing, and they trade fish for other foodstuffs such as beef or reindeer meat and skins.

The new EU legislation forbids fishing with nets in shallow waters to protect endangered species such as Havsöring, or Sea Trout. This legislation, however, does not take into account the many plentiful species that inhabit the shallow waters and that have been fished by local people for centuries. Kustringen is now working on a more locally influenced management plan, based on ecological principles rather than geographic ones.

New EU legislation forbids fishing with nets in shallow waters to protect endangered species. This legislation does not take into account the many plentiful species that inhabit the shallow waters and that have been fished by local people for centuries. 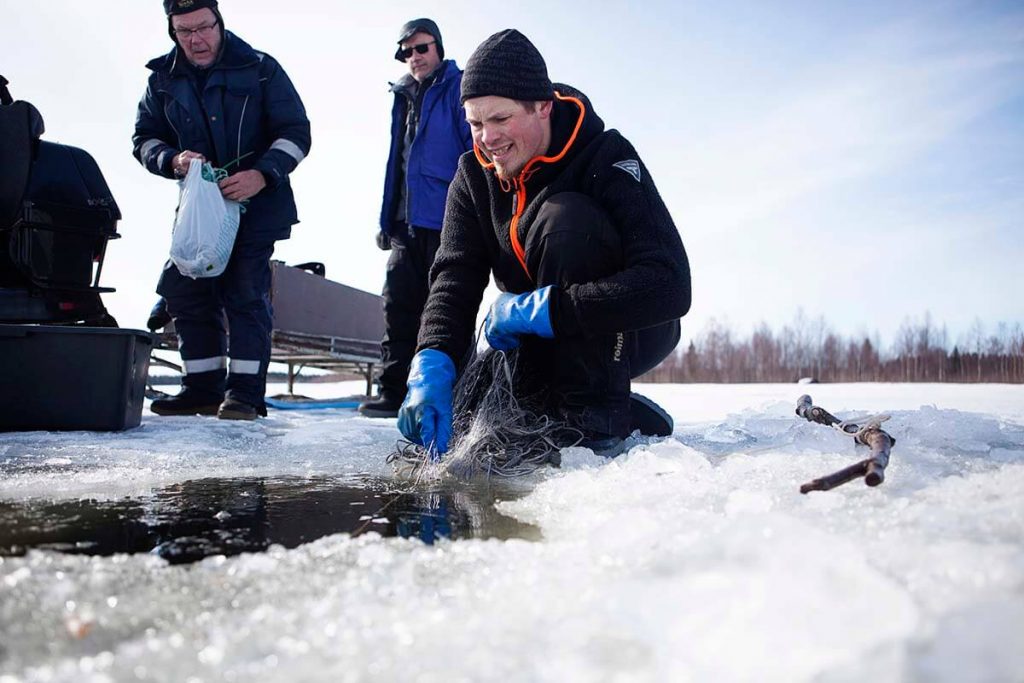 Local fishermen Joakim “Jocke” Boström, Roland Nyman, and Sten Hellman remove fish from a net. Joakim learned from his grandfather the best locations to fish, the best methods for fishing, and the signs and symbols that can be seen in nature. He is upset that the “three-meter rule” has criminalized his ancestral traditions. He says, “Today it is impossible for me to hand over this knowledge and teach future generations the important knowledge connected to fishing. How do I explain to my child that it is illegal to fish? How shall I act when future generations want to put their nets down where my grandfather taught me to fish?” 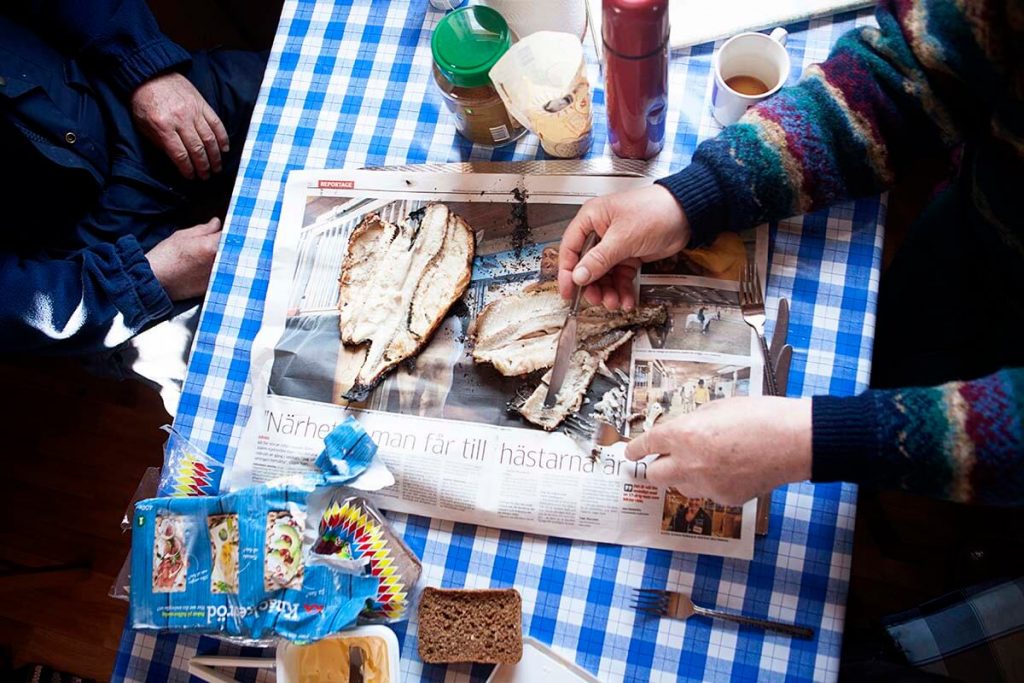 When together, the fishermen speak in their Kalix dialect. This is an idiom rich in words for natural phenomena like snyreingen, which describes the ring around the moon predicting snow, or illverskrokan, which names the special clouds that spell the onset of bad weather. On the other hand, there are no words in Kalix for “helicopter” or “computer,” and for these contemporary objects, the villagers must switch to standard Swedish. 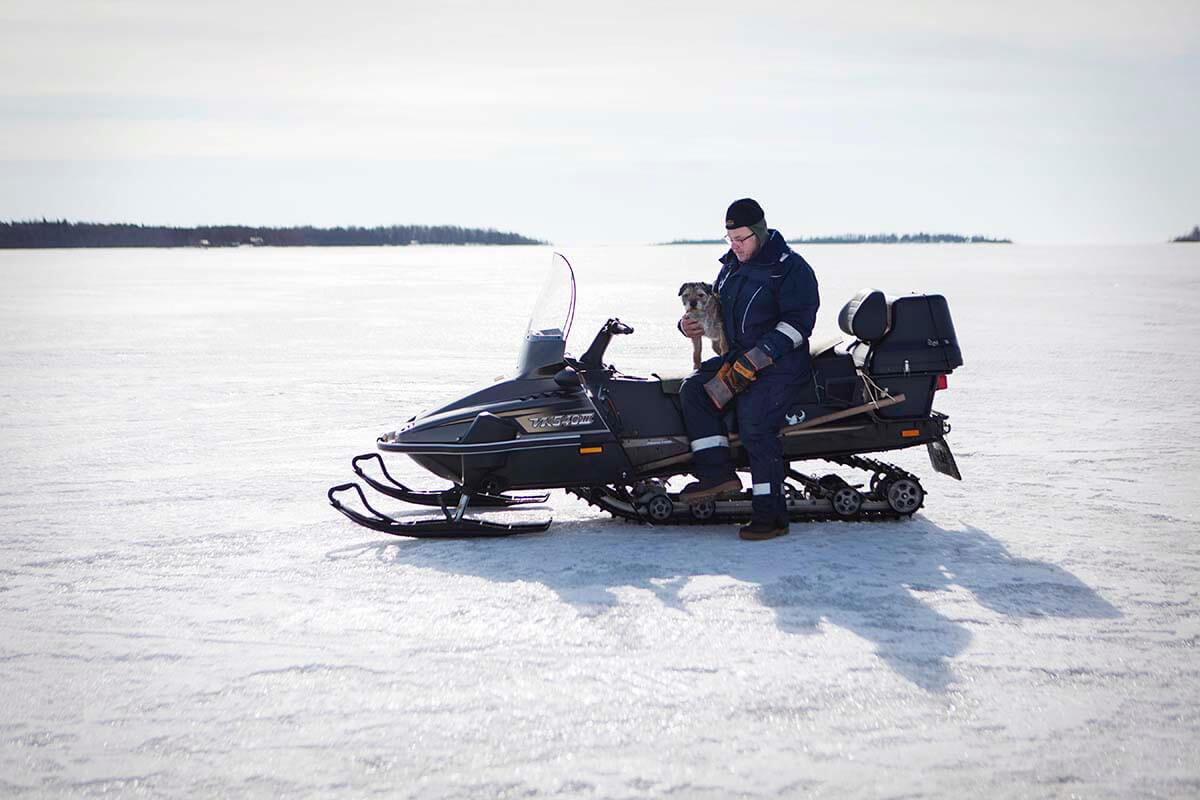 Fisherman Roland Nyman sits on his snowmobile. The snowmobile is now used for transport on snow and ice and makes fishing, even in the outer archipelago, much more accessible. In the past, Roland’s family used reindeer to get out on the ice.

Some people in the villages in the Kalix and Torne river valleys still keep small herds of twenty to thirty reindeer. Peder’s grandfather and his family have kept reindeer for as long as they can remember.

The villagers’ last hope for preserving their culture lies in convincing the Swedish authorities of the ecological value of this ancient Indigenous wisdom. 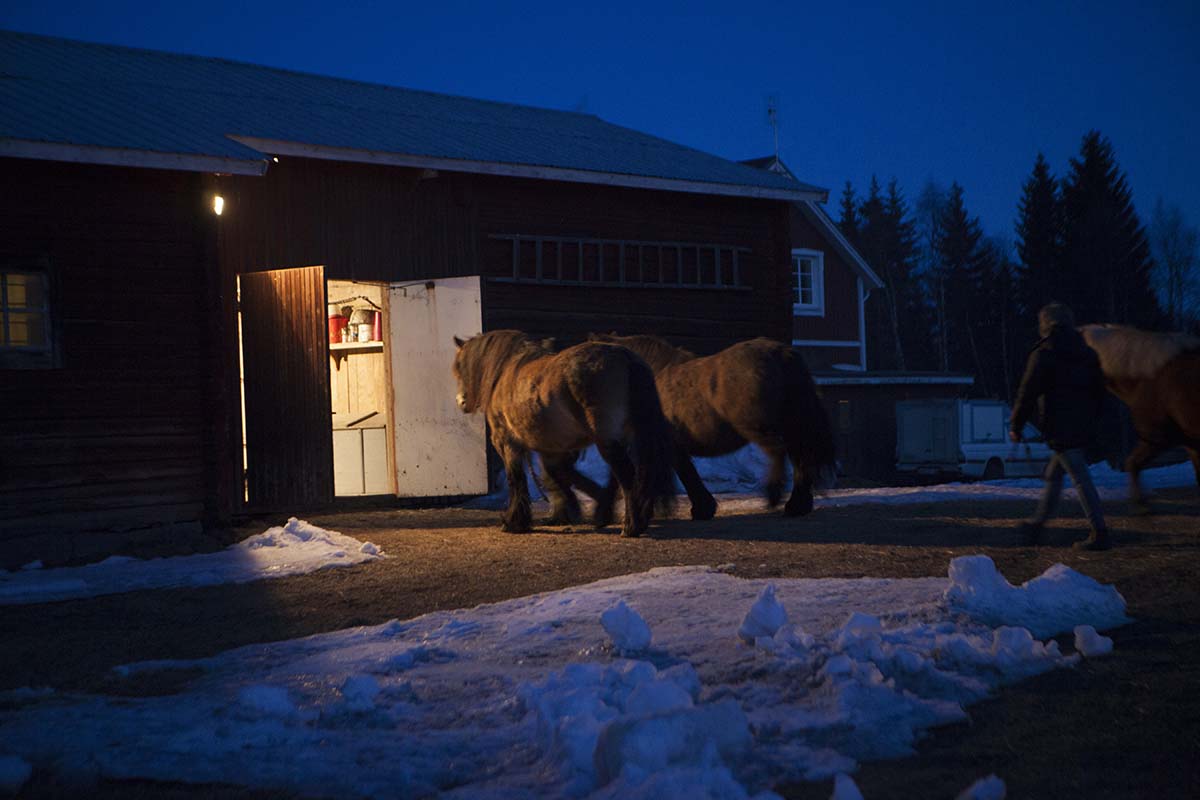 Peder’s horses are brought in for the night at his homestead on the island of Brudholmen, which means “Island of Brides.” His relatives have lived here since at least 1573, when the first names are recorded in the church books. He and the other villagers have been striving to find language to express the ancestral knowledge they share. Their last hope for preserving their culture lies in convincing the Swedish authorities of the ecological value of this ancient Indigenous wisdom.

Francesca Price works for the Gaia Foundation in the UK. Raised in New Zealand, she was a journalist and broadcaster for 25 years, working around the world for the BBC and other media on environmental and food issues. Back in the UK, she now lives in Somerset with her partner and three daughters.

Clare Benson is a photographer and interdisciplinary artist from the USA, whose work has been exhibited and screened throughout the USA and internationally. She earned her MFA at the University of Arizona and her BFA at Central Michigan University, and worked in northern Sweden on a Fulbright Fellowship.

We Feed the World. (n.d.). In Facebook [Community page]. Retrieved from https://www.facebook.com/wefeedtheworldcampaign/?ref=page_internal