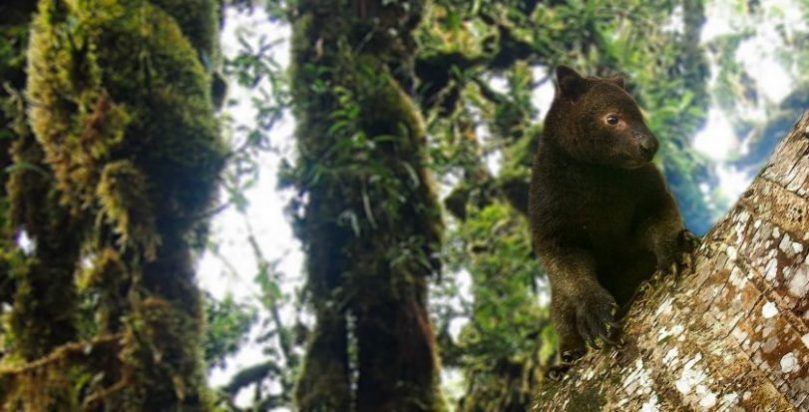 For tens of thousands of years, the people of Papua New Guinea (PNG) have hunted animals for food. They used bows and arrows, made traps, and used poison vines. In the 1950s this all changed for the Wape people of the Torricelli Mountain Range, a remote area in northwestern PNG. Enter Western missionaries with their Christian beliefs, who blessed the landscape to eradicate the “evil spirits” that once protected the lands from overharvesting. Enter new technologies — torches, guns, knives, and axes — making it easier to hunt and cut down the forest where the animals live. Enter access to new medicine, trebling the human population and adding pressure on local resources. One resource in particular was the Tenkile, a tree kangaroo whose numbers plummeted to one hundred individuals. And then enter myself and my husband Jim Thomas, who decided to try and help save the species from extinction.

In 2003 Jim and I left the comforts of home in Australia to live in the Torricelli Mountains. Our mission was to prevent the Tenkile tree kangaroo from being hunted out of existence. With so few Tenkile remaining, it was obvious that if only one animal was hunted every year from each village, the species would become extinct within five to ten years. It has been classified as critically endangered on the International Union for Conservation of Nature’s Red List.

A map of Papua New Guinea showing the location of the Torricelli Mountains. Photo: Mark Hanlin, 2016

Neither Jim nor I had any idea about the ways of life of PNG. All the stories about the place that we had heard in Australia were negative, and we were advised not to go there. But the thought of working to protect one of the most critically endangered mammals in the world appealed to us. Our years of scientific training and zoo keeping were all we had as tools to try to convince the local people to stop killing Tenkile for food.

My role was to “educate” the local people and influence them to stop hunting, event though the Tenkile had provided protein for them for thousands of years.

By the time we arrived in the Torricelli Mountains, people had already signed an agreement not to hunt the Tenkile, but hunting still continued. Six animals were killed in the first year we were there. It was my role in the organization, the Tenkile Conservation Alliance, to “educate” the local people and influence them to stop hunting, even though the Tenkile had provided protein for them for thousands of years. My initial approach was to start with children.

I developed a school program that focused on science: the biology of tree kangaroos, their evolution and classification, as well as other basic scientific concepts such as food webs and food chains — topics that I thought were fundamental for people to know about. Although the students were highly engaged and eager to learn, I didn’t feel as though those lessons inspired change or had any influence on local hunting pressures. Clearly, school-aged children were not my target audience. I needed to speak to the hunters themselves. 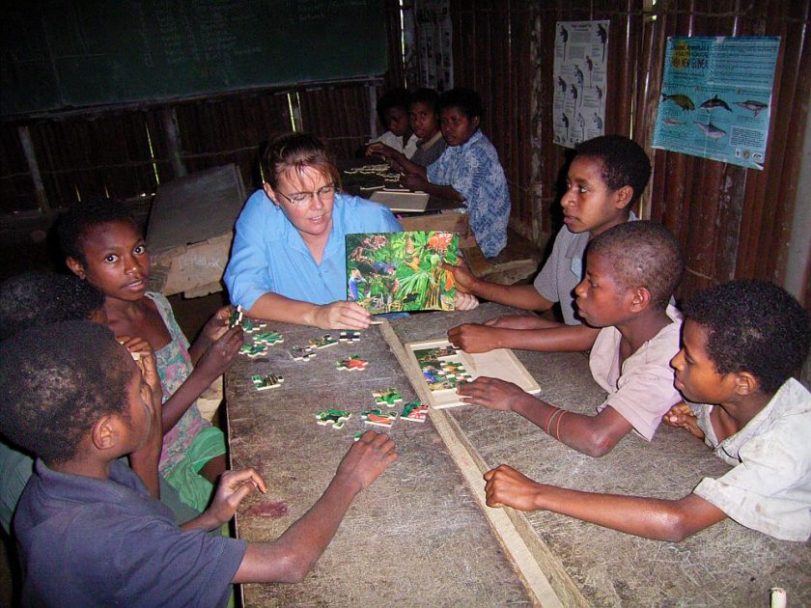 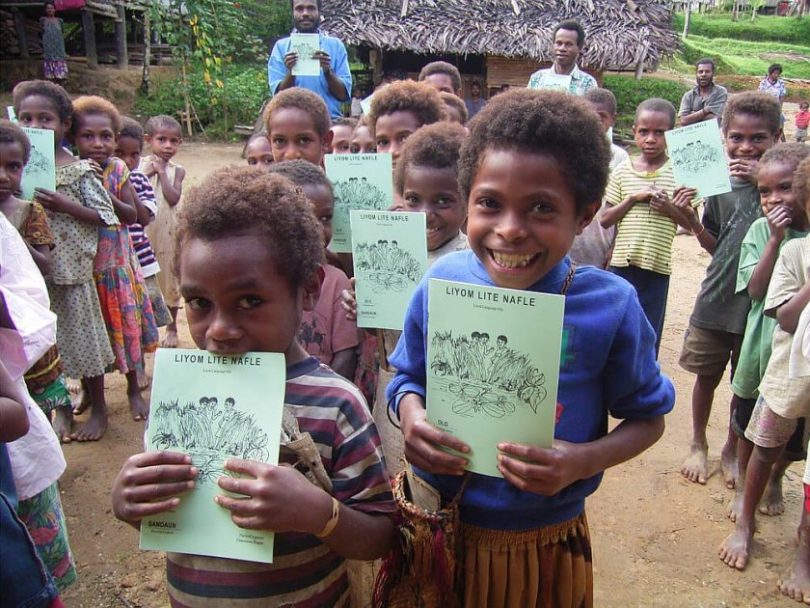 In PNG villages, the literacy level is less than five percent, so written material would not be of much use. Instead, I developed an education program using drama and song. Papua New Guineans are fantastic performers. It didn’t take long for a small group of people from each village to start acting out their cultural connection to the Tenkile. They also explored the issues of hunting and the effects of logging and completed their performances with the most beautifully composed songs, which moved me to tears.

The drama program was always a crowd-pleaser, full of raucous laughter. But I couldn’t understand why, when the time came to kill the Tenkile in the play, people would still be laughing. Here I was, trying to instill empathy for the animal, but everyone was splitting their sides. Then I realized that people were just amused by their uncles’ and fathers’ acting skills (or lack thereof).

The mood would change when the songs were performed. People became somber and quiet and really listened to the words.

“Yumi mas lukautim bus”  — We must look after the bush.

We really knew we were having an impact when one of the songs was composed about us.

Tenkile is the golden medal of the Torricellis.

When the missions came, they got rid of our custom and culture. They promised us change, but we are still the same.

Now Jim and Jean are here to strengthen our customs and culture. Now we are seeing change.”

These songs made us feel incredibly proud and helped us keep going in one of the most challenging situations we had ever been in. The work we did together provided the local communities with immense pride and an identity with the organization, to which they are now favorable and committed.

And, through those performances, I realized that the people’s cultural connection to nature was what had motivated them to change and support the hunting moratorium. People would say, “No gut em stori tasol,” which means “It will not be good if the Tenkile becomes just a story.” People wanted their children to see this animal with their own eyes. They had an emotional connection to the Tenkile. It was not just valued as a food source; it also had cultural value.

This reminded me of our cultural icons in Australia, such as the koala — a species that gives us identity. But not only that. Thinking about this made me realize just how rich we Australians are in natural assets: the Great Barrier Reef, Uluru (Ayers Rock), the Snowy Mountains, the Simpson Desert, Kakadu National Park. We have a lot to be proud of and a lot to protect, but we haven’t done so well. Australia has experienced a great loss of habitat and the worst record of mammal extinctions of any country in the world.

I wanted to influence the people of PNG to value their natural assets and not to follow Australia’s example. I am aware that my personal motivation was riddled with “white guilt” and a desire to correct some of our own mistakes in Australia. I would hate to see PNG lose what we have lost. The island of New Guinea has many species in common with Australia and a huge number of endemic species, too, including all twelve species of tree kangaroo. Approximately seven percent of the world’s biodiversity is found there. It seemed to me that there was a lot at stake, and Jim and I felt compelled to do whatever it took to protect it. 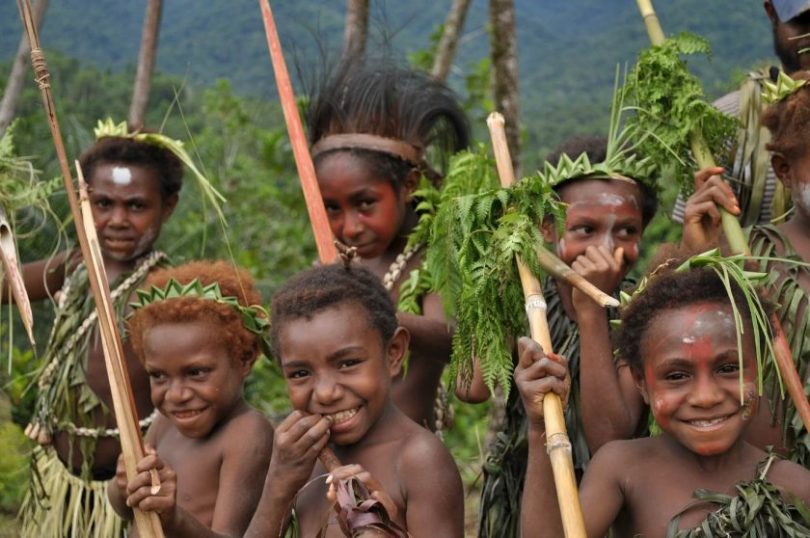 Once people understood that the Tenkile was unique to their area, they became so concerned about it that they decided not to hunt in the forested areas where the Tenkile resides (approximately eight hundred meters above sea level). This entire forest area was designated as a no-go zone, for fear that if they went there to hunt other species like cuscus (a type of possum), a dog might accidentally kill a Tenkile: they decided not to take that risk.

From there, it was a natural and intrinsic progression to consider the fate of other species they believed were in decline. Species such as the Guria Pigeon, or Victoria’s Crowned Pigeon, which is the largest pigeon species in the world, was locally extinct due to overharvesting. A giant frog species known as “Il Mambo,” the size of a newborn baby, was also hard to find, and there was a growing concern for its future. This was a resolve that naturally progressed to more species once it was clear to people that the Tenkile was in grave danger. It showed that the people of the Torricelli Mountains understand the intrinsic value of conservation; their biocultural connection to it motivated them to take it a step further.

This is not something we see in Australia. Here we continue to use an intellectual approach to debate and deny climate change and, in the process, lose our emotional connection to life and all that it provides us. The shame and guilt I felt was enormous and such a great motivator to keep me going in PNG. After nearly fifteen years of working on species recovery programs in Australia, we had never seen this amount of success and support to protect not only one species of tree kangaroo but an entire ecosystem. I realized that this is what we need to learn from Indigenous communities who are still so connected to their landscapes. How can they teach us to reconnect to our own landscapes in Australia? 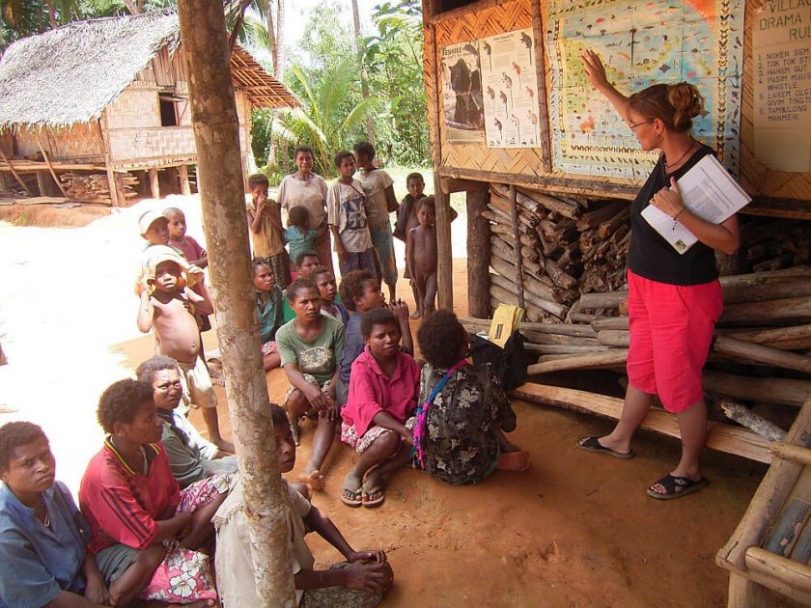 Humans need to connect with life and living things. We begin to feel and empathize with each other and build relationships that can lead to enormous change, influence, and insight into not just environmental issues but social issues as well. I am certain that just using scientific facts and figures we will not fully reconnect, but using stories, artwork, humble conversations, and the simple sharing of life experiences, both past and present, will give us a chance.

Under PNG legislation that is currently under reform, there are several options for establishing a formally protected area. We facilitated the process of agreement, which included sketch mapping and later the collection of GPS points of the proposed no-go conservation areas, and have submitted an application to the PNG Government to establish a 185,000-hectare area of pristine tropical rainforest for legal protection.

The Tenkile Conservation Alliance has been working with independent filmmaker Mark Hanlin to share our story with the rest of the world. During 2017 the feature-length documentary Into the Jungle will be released worldwide, and we hope that it will inspire people and open their eyes to how conservation of biodiversity and culture can really work together. 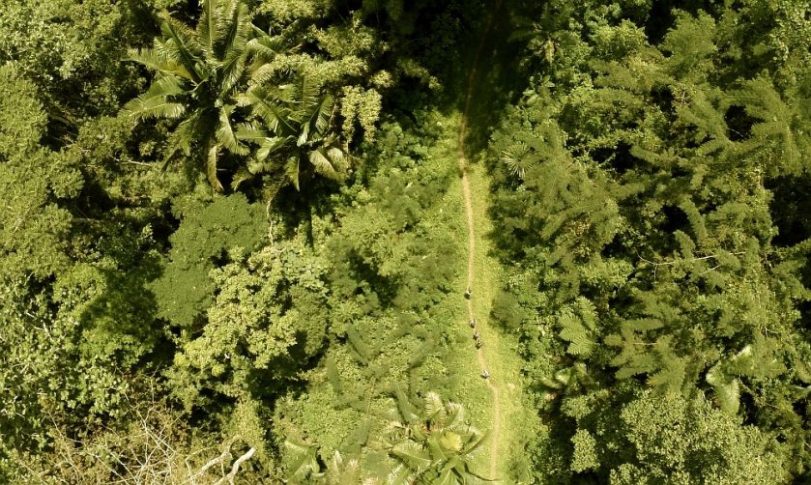 This life journey has taken a lot of commitment, sacrifice, dogged common sense, and relationship-building with the local people. We have turned the organization into an award-winning conservation and development program. This would not have happened if we had not learned and changed ourselves and had instead held on to our scientific training. Our ability to be flexible, to listen, and to honor the local communities and their traditional culture has been the key to our success.

As the “education officer,” I actually was the one who did a lot of learning. I was given the privilege to learn from thousands of years of experience and traditional knowledge held by the local people.

It was obvious to me that my culture of learning the “facts” had become somewhat irrelevant in PNG. I discovered it was the songs, dance, drama, and cultural connection to the Tenkile that made all the difference. Now people no longer hunt the three species of tree kangaroo that live in the Torricelli Mountain Range. This has resulted in an increase in the Tenkile populations from one hundred to over three hundred animals, as well as in the local protection of their rainforest habitat.

Jean Thomas is an award-winning conservationist who works with her husband Jim in remote villages of Papua New Guinea. Through the Tenkile Conservation Alliance, Jean and Jim have helped people from fifty village communities form a vision to value and safeguard their natural resources and cultures, and have facilitated the protection of over 180,000 hectares of the country’s rainforest.

See www.tenkile.com for more information and to view a short ten-minute video about their work.