Yamani: Voices of an Ancient Land

For tens of thousands of years, the rich and beautiful sounds of hundreds of different languages washed across Australia. Over all of the continent it is believed there were more than five hundred languages at one time.

Around two hundred years ago, a new language began to replace them, sweeping across the land with such force that some parts of it could no longer hear the voices that told its stories and held its secrets. A deep silence seemed to be looming.

Then, finally, a change began. As the volume of the old words faded to a whisper in some places, the people who are their custodians began to take action, calling for respect, for the rights to speak and be heard in their traditional tongues, while stirring everyone to appreciate the treasury of knowledge held in the first languages of Australia. The project Yamani: Voices of an Ancient Land is part of that call.

As the volume of the old words faded to a whisper in some places, the people who are their custodians began to take action.

Yamani: Voices of an Ancient Land is an innovative collaboration between the Queensland Indigenous Languages Advisory Committee (QILAC) — an Indigenous language advocacy organization — and the Wantok Musik Foundation record label. More than just a recording, the results of this project include a fully mastered CD with ten songs in five different languages, a short film highlighting the impact that this project has had on the participants, and a range of performances.

The film, also titled Yamani: Voices of an Ancient Land, illustrates the power of language, the strength of identity, and the way in which pride in Indigenous cultures can be shared through contemporary song. The list of resources below includes links to six short videos in which each Yamani project participant talks about her life experience and relationship to her language. Together, these videos provide further background to the Yamani project.

Warrgamay Elder Bridget Priman explains: “Yamani means ‘rainbow’ in the Warrgamay language, and as the name for this group it reflects the coming together of different people and languages in a rainbow of song.”

Knowledge holders from other communities joined with Bridget to create this musical rainbow. They are Ethel Munn (Gunggari), Leonora Adidi (Kalaw Kawaw Ya), Joyce Bonner (Butchulla), Faith Baisden (Yugambeh), and Melinda Holden (Warrgamay). They have come together to produce eleven songs in five different languages to share the many voices of Australian country.

As this process empowers each language community through the opportunity to share Australia’s ancient knowledge, so too does it empower these “Voices of the Earth”: the people who continue to speak and share Australia’s first languages. Forming QILAC a decade ago, the six women have been collaborating with the vision of making Aboriginal and Torres Strait Islander languages stronger for many years to come.

The six women have been collaborating with the vision of making Aboriginal and Torres Strait Islander languages stronger for many years to come.

While some of the women were nervous at the start of the project, believing that they couldn’t sing or read music — let alone write music—that didn’t stop them.

Committed to strengthening the many Indigenous languages of Queensland, they found that music was an excellent tool for learning one another’s language.

The film portrays the women’s journey and shows how the different stages of the language-learning, storytelling, and music-making process were significant to the women in different ways. Joyce found that just writing down a song on paper was special, whereas Ethel was finally able to witness an old and sentimental songbook come to life at eighty-four years of age. The power of collaboration is portrayed especially through Leonora’s workshop with the other women, in which she turns a poem about her grandmother into a song. Bridget wrote a song about the Warrgamay Creator and shared her cultural knowledge of her region.

“We each shared songs in our languages with the others. We sing together in five languages, so we had to teach our language and learn the other four languages,” explained QILAC Chairperson Joyce Bonner. “It has been a wonderful, challenging, and joyful experience which truly shows the power of music for sharing language.”

‘It has been a wonderful, challenging, and joyful experience which truly shows the power of music for sharing language.’

All of the women participated in music and technology training for twelve months, proving that it is never too late to learn new skills. With the assistance of a singing coach, Kristina Kelman, the women learned how to use muscles and deep breathing to develop harmonies and find notes that they never knew they could reach. They then learned how to use new technology throughout the recording process, working with award-winning composer David Bridie and Wantok Musik Foundation to produce a CD. In David’s words, “Language is cultural identity encapsulated by song,” and Yamani illustrates that it is never too late to share this cultural identity by learning new languages and new songs. 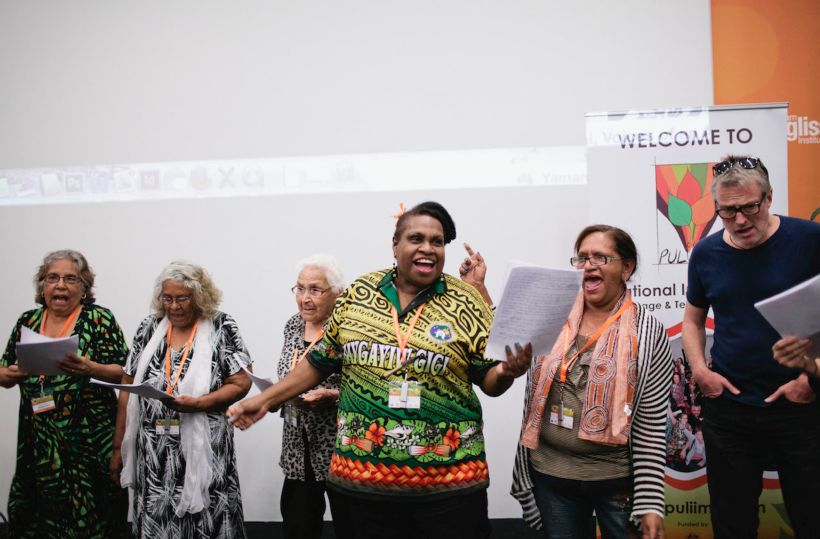 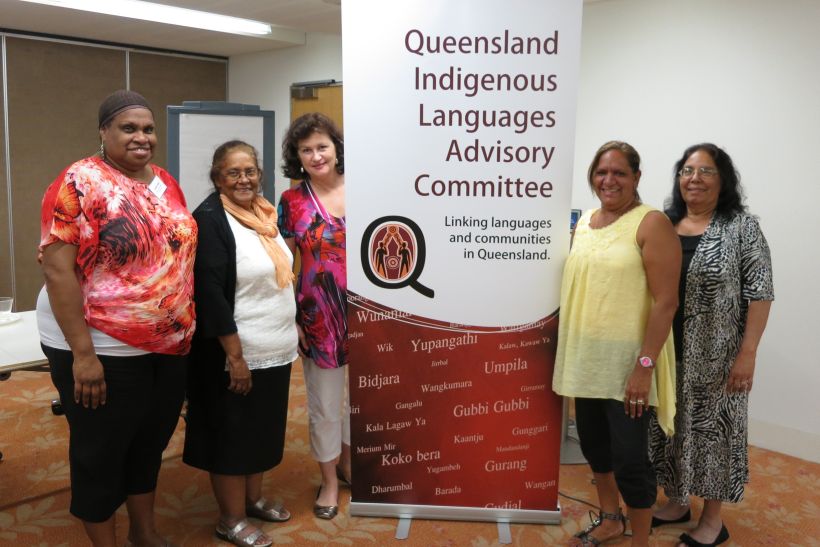 Find more images of the Yamani project artists and read their testimonials about their ancestral languages at https://terralingua.org/langscape_articles/yamani-project-artists/.

To find out more, go to the Queensland Indigenous Languages Advisory Committee website.

Purchase the “Yamani: Voices of an Ancient Land” CD at https://wantokmusik.bandcamp.com/album/yamani-voices-of-an-ancient-land.

Faith Baisden is from the Yugambeh community south of Brisbane, Australia. She is an artist, photographer, curator, and composer. Faith is Director of Binabar Projects, an Indigenous consultancy involved in business planning, Indigenous language, cultural, and artistic project management, and book production. For over twenty years, she has been involved in Indigenous language projects, both at the community level and as a consultant on state and national policy in support of languages.

Carolyn Barker is a producer, contemporary jeweler, and facilitator of community cultural development projects. When she isn’t head down at her bench or playing in the wild with family, Carolyn works with creative Indigenous language workers through First Languages Australia and the Queensland Indigenous Languages Advisory Committee on an array of national projects, including Yamani: Voices of an Ancient Land; Warra: Building Teams, Building Resources; and Gambay: Australian Languages Map.

Thomas Dick is the founder of Further Arts, an NGO based in Port Vila, Vanuatu that works with local communities on arts and cultural projects. Further Arts seeks to empower people to develop long-term social and commercial enterprises in the creative arts, agriculture, and communications that are culturally, socially, environmentally, and financially sustainable. Read more from Thomas Dick.

Kristina Kelman is a highly accomplished choral director, having directed some of Queensland’s best performing choral groups. Kristina’s choirs have won several local, state, national, and international competitions. She holds a PhD in Music Education and a Master of Music in Jazz Voice and Choral Studies.