You Can Eat Your Cake and Have It Too: A Special Cake Recipe from the Nicobar Islands, India

Food—its cultivation, cooking, and consumption—is an important ingredient for studying a society. Whether looking at food through the lens of anthropology, history, or linguistics, we cannot skip this strand of the cultural tapestry of a society if we wish to understand it clearly.

What we eat, and how we eat, isn’t just a part of the essential biological process required for the survival of a living being; it’s also a carrier of the inherent nature and function of an individual human body and society as a whole. 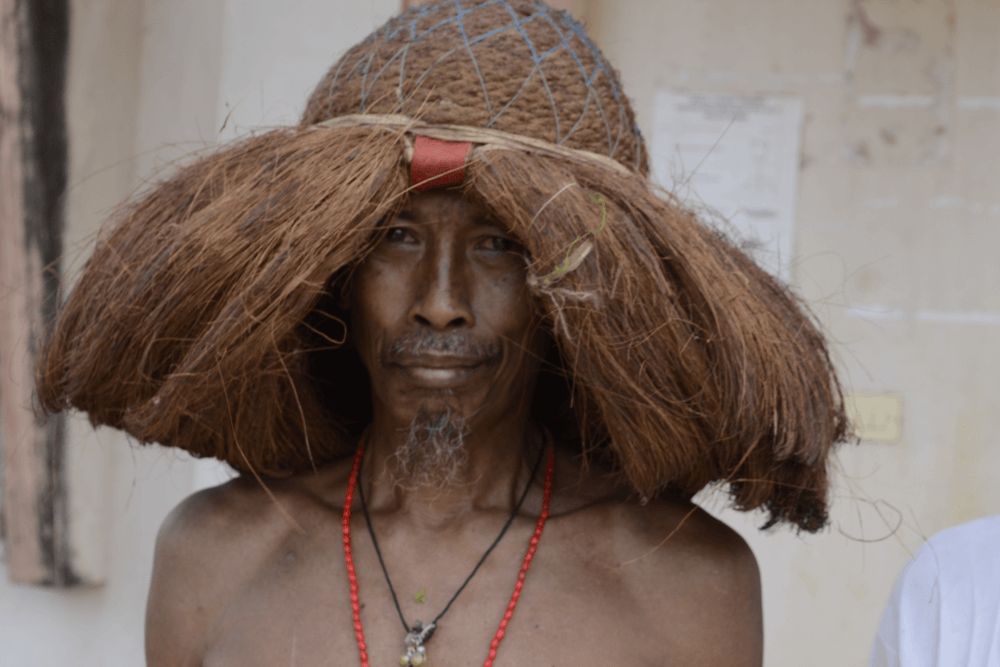 Oral traditions related to food are an important carrier of the intrinsic knowledge of a community. Stories, fables, myths, idioms, songs, rituals, and traditional recipes are not just linguistic items, but the wisdom and observations of different generations that have survived on Earth. This knowledge contains subtle calculations, predictions of the weather, cultivation practices, and the nutritional and medicinal value of each and every part of the plants growing in the area. Food is not just a physical entity: it’s a legacy, a symbol of identity, a tool for conciliation.

Food is not just a physical entity: it’s a legacy, a symbol of identity, a tool for conciliation.

Endowed with remarkable culinary diversity, India offers many examples of this kind of knowledge. Every corner of the subcontinent offers different and unique textures, aromas, and flavors in its dishes. This diversity extends to the Andaman and Nicobar Islands, a union territory of India located where the Bay of Bengal meets the Andaman Sea. In this article, I will discuss the biocultural knowledge associated with talua, a special cake recipe indigenous to Teressa Island in the Nicobar Islands.

Teressa was named for the Austrian Duchess Maria Theresia while it was occupied as one of the colonies of Austria and Denmark. It is blessed with bewitching natural beauty, from the silver sand glittering on the beach to the vast stretch of blue ocean surrounded by green coconut trees. The lush meadows with orange kewra (Pandanus) fruits dangling amid deep green leaves look so enchanting that one may get lost in the scenery. It’s basically a hunting-and-gathering community. People of the community tend to be very simple and soft-spoken. 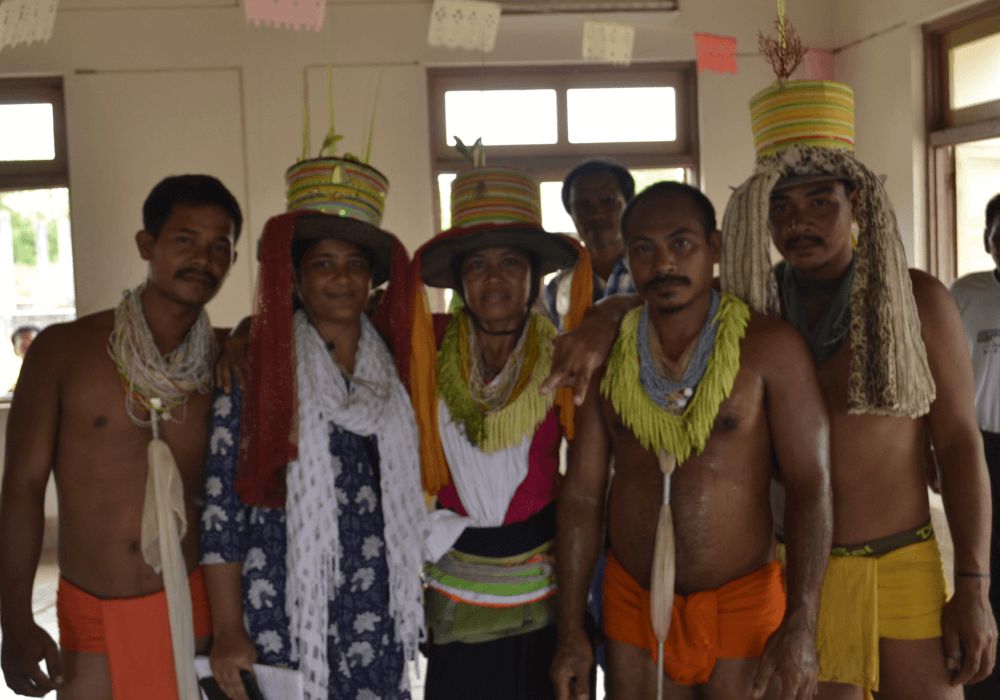 Talua is a special delicacy prepared on every festive occasion by Teressa’s inhabitants. Although they talk of Christmas as the only festival they celebrate, in practice they celebrate many occasions, not following a particular calendar. For example, people invite each other to celebrate their good hunt or to get acquainted with any new member of the community. The latter celebrations are especially significant because those who have more friends at the end of the year than they did at the beginning are considered to be good and prosperous people within the community. They are praised and deemed eligible to be community leaders. All celebrations are marked by feasting, drinking, and dancing all night. The talua cake is often served.

Talua is prepared with banana and coconut, both of which are found in abundance on the island. These are the only ingredients used in the dish. Both raw and ripe bananas are used, whereas the coconut must be of a very particular kind: that which is neither tender nor fully matured, i.e., at the stage when the epidermis of the meat is still yellowish and the kernel has started to become solid.

The first step in the preparation of talua is to peel the raw bananas and crush them using a masher. Next, the ripe bananas are peeled and mashed. Both are then mixed together. Leaves of supari (betal nut) are washed and intertwined so as to form a platter. The banana mixture is well spread on the leaves. Onto it goes the crushed coconut, spread evenly on the bed of raw and ripe bananas. The platter is then rolled and tied using the strands of the leaf, making sure the batter is well bound under the padded leaves. The prepared rolls are dipped into a boiling pot of water. Some people also add some crushed kewra to the mixture of bananas, which impart its characteristic flavor to it. The rolls are strained and cut into pieces. Finally, this island delicacy is savored with singing, dancing, and imbibing liquor by the whole community. 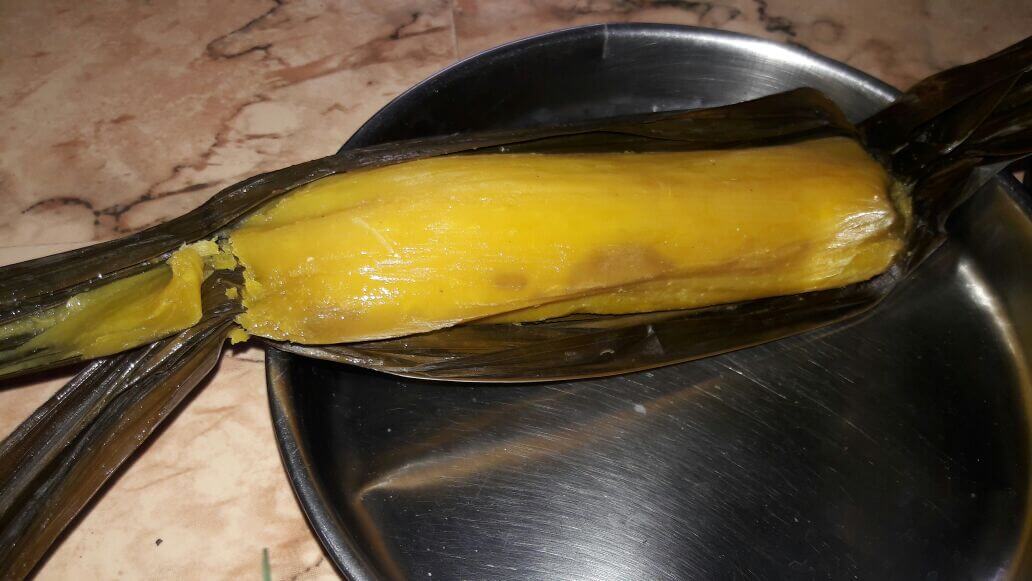 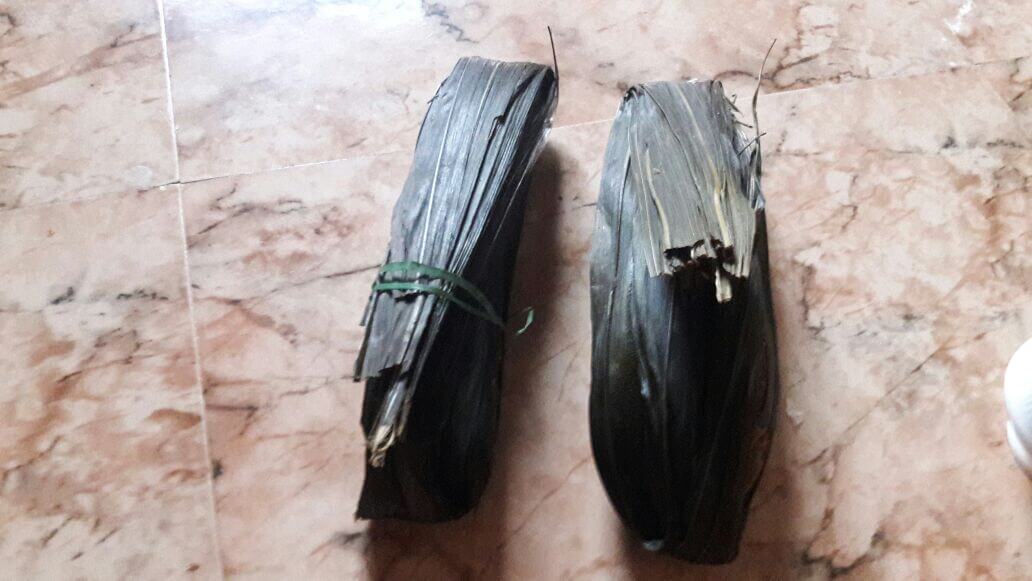 The rolled and tied leaves ready for cooking. Photo: Kutchuch, 2018

Banana and tender coconut are both packed with nutrients. Banana has no fat whereas coconut contains saturated fats that help break down harmful fats in the body. Thus, this special cake balances dishes such as pork, which is as significant as talua for any celebration on Teressa.

Today, food technology has advanced to the point where 3D food printing and nanotechnology in food packaging are being used. In a world where technology has enabled us to reshape our crops and customize their taste as per our choice, in a world where food is the cause of most diseases—in fact, where some of these diseases are now so common that they practically have become an inherent feature of human beings—what is the importance of the talua recipe and recipes like this in general? Why should they be documented and perpetuated?

Researchers claim that Indigenous recipes can help resolve ecological imbalances as well as help us survive chronic diseases. Nowadays, eating out at fancy restaurants is mainly for demonstrating one’s prosperity. Buying imported fruits and vegetables is a sign of lavish tastes, whereas most of us are unaware of the names of plants or trees, even those growing in our own neighborhoods.

Buying imported fruits and vegetables is a sign of lavish tastes, whereas most of us are unaware of the names of plants or trees, even those growing in our own neighborhoods.

Maintaining the knowledge and practices behind Indigenous recipes such as that for talua can help enhance food security. As part of a larger program supporting Indigenous biocultural heritage, it can also boost tourism, which, if managed properly, could also contribute to employment opportunities for Indigenous people and add to the national economy.

In our ignorance and blind obedience to consumerism, we are losing indigenous plants, insects, birds, people, languages, cultures and a lot more every day. And these are not just aspects of life we are losing, but a condition for living on Earth.

Rakhi Kumari currently works on a project of the Scheme for Protection and Preservation of Endangered Languages that is documenting Luro, a critically endangered language. She holds a Masters in Linguistics from Jawaharlal Nehru University and has also worked as Project Assistant for Center for Oral and Tribal Literature, Sahitya Akademi, New Delhi.