You Need to Carry the Torch of Light 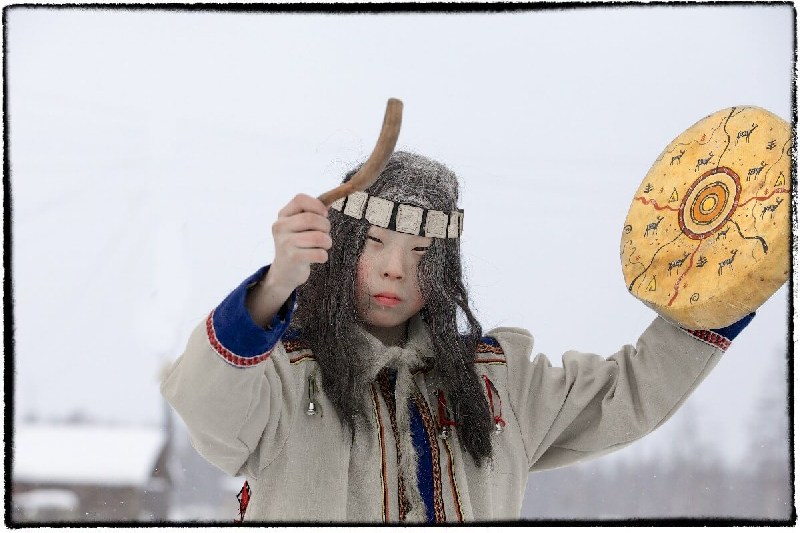 Drum-dancing is the heart of life in Siberia. D’ulus Mukhin, the youngest of the Siberian shamans, is trying to awaken his sleeping settlement from amnesia. Photo: Galya Morrell, 2014

“As a child,” says D’ulus, “I was beaten at school on a daily basis. My classmates thought I was ugly. They did not like the shape of my eyes, and my ears were too big for them. I don’t hate my bullies; I hug them and shake their hands because no matter how bad circumstances may be, you need to carry the torch of light. This is what makes you an artist and a human being.”

No matter how bad circumstances may be, you need to carry the torch of light. This is what makes you an artist and a human being.

Those eyes . . . No PhD in ophthalmology could explain with confidence what there is in them. There is something so deep, so beautiful, and so powerful that hard science simply couldn’t capture it.

I remember the day when I first met D’ulus more than five years ago, on the shore of the Aldan River in the heart of Siberia. There stood a boy, a little Shaman — with his drum painted with little Reindeer-spirits — frozen in the middle of the white world. Like a sculpture, he was an integral part of an Arctic landscape — that is, until he started to drum-dance. 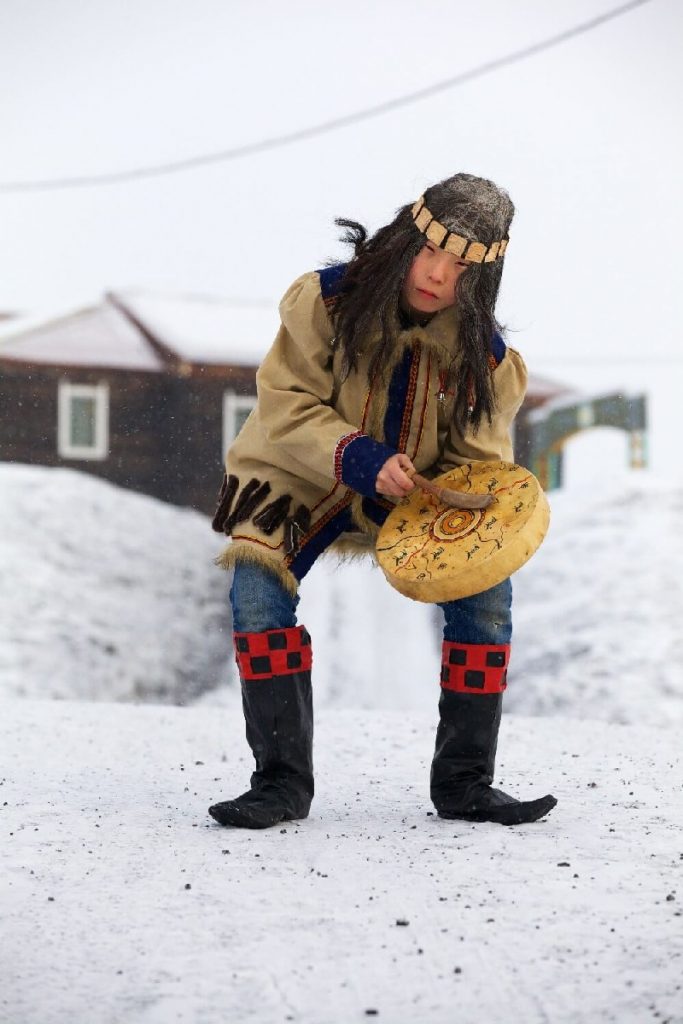 Krest-Khaldjay, a little settlement in Yakutia, Siberia, is a place where old traditions have been thriving since the collapse of the Soviet Union. D’ulus Mukhin is drum-dancing downtown, hoping to bring all generations together. Photo: Galya Morrell, 2014

His voice, dance, and movement flickered against the –50 ˚C cold, making me feel as if I were on fire. In a second he turned into a flint, a flint of the Arctic, creating sparks whose light can empower us to see not only outward but inward as well.

For the next three days, I couldn’t concentrate on anything but D’ulus.

I made a series of portraits of him as we traveled together with his Even grandfather Egor Egorovich Egorov along the bank of the Aldan River. From his grandfather, a great Even hunter, I learned the incredible life story of D’ulus — a story of love, compassion, and acceptance. There is a vast mix of Arctic bloods running in his veins, making him a living embodiment of Siberia.

Left: An acclaimed actor in Yakutian cinema, D’ulus Mukhin is bringing together traditions and modernity: “People in the villages eat raw meat, stores are empty. China will arrive here soon.” Center: D’ulus Mukhin got his first role in a Yakutian film after his portrait was exhibited at The Explorers Club in New York City. “I was born in a little village which has been forgotten by God and Government. We had to survive.” Right: It is –30 ˚C, but it a week it will be –55 ˚C. That’s winter in Siberia. Photos: Galya Morrell, 2014

Meeting D’ulus and becoming his friend was a gift. But a greater gift has been watching D’ulus rise from his childhood to critical acclaim as one of the most talented young actors in Yakutia, who uses his unique voice to open up stories we’re not used to hearing and to turn the spotlight on the communities he comes from.

In this film, D’ulus plays the lead role of a stuttering boy, living during World War II in the heart of Gulag land. 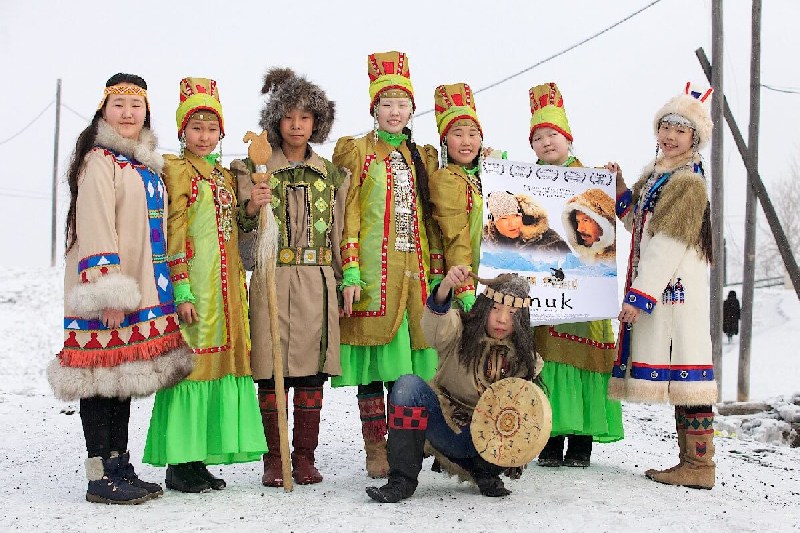 At –48 ˚C, the young Yakutian dancers and singers in the small village of Krest-Khaldjay in the heart of Siberia are getting ready for a performance downtown. Photo: Galya Morrell, 2014

Recently, D’ulus has been the face of an Arctic Without Borders exhibition in Hawaii. “I have a feeling that he can see through us, can see through mountains and rocks, can see hidden figures,” said Aunti Puna, one of the most respected elders on Kauai. People of Kauai invited D’ulus to come and visit, be their guest, gather with elders and children, and be one of them.

“I want to be many things,” says D’ulus, “not just an actor or a drum-dancer. As an artist, I know that my mission is to break stereotypes that we are born into. I learned a lot from Nature and from my grandparents, with whom I grew up. We didn’t have comforts at our home, but I had plenty of love despite the fact I had been adopted as a child.”

As an artist, I know that my mission is to break stereotypes that we are born into. 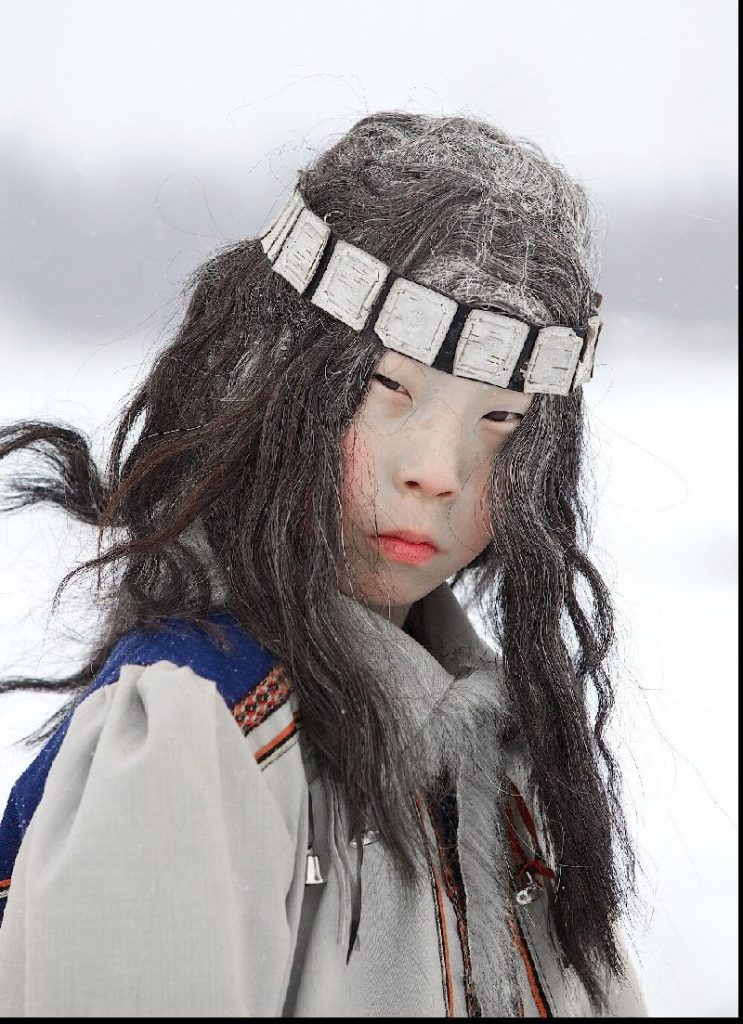 D’ulus Mukhin, the adopted son of an Indigenous family in Siberia, has become the engine of a dying village and the hope for its revival. Photo: Galya Morrell, 2014

D’ulus Mukhin, 19, is an Even actor and drum-dancer from Yakutia, Siberia. Acclaimed in Yakutian cinema, he uses his unique voice to open up stories that we’re not used to hearing. He says his mission is to break the stereotypes people are born into..