Learning Our Language Is Like Learning to See in Full Color: An Interview with Gisèle Maria Martin (Tla-o-qui-aht) 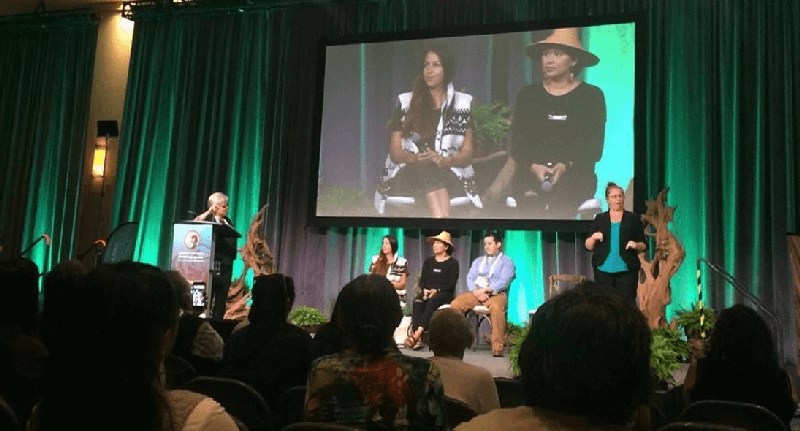 In June of 2019, I was very fortunate to attend a unique event: the HELISET TŦE SḰÁL “Let the Languages Live” conference in Victoria, British Columbia, Canada (June 24–26, 2019).

Organized by the First Peoples’ Cultural Council and the First Peoples’ Cultural Foundation, two prominent First Nations organizations in British Columbia, in partnership with the Canadian Commission for UNESCO, Let the Languages Live was an international gathering of Indigenous Peoples to celebrate the 2019 International Year of Indigenous Languages. The conference brought together over one thousand Indigenous language experts and advocates from around the world to celebrate Indigenous languages, share knowledge and experiences, and support one another in their language maintenance and revitalization efforts.

It was a rare opportunity for me to listen to and learn from an extraordinary group of Indigenous language champions, deeply committed to ensuring that the many voices of humanity — the world’s diverse languages, most of which are Indigenous — continue to be heard. In particular, in the context of Langscape Magazine’s special 2019 project, the Indigenous Youth Storytellers Circle, I was especially interested in making contact with the younger generation of language champions — the Indigenous youth who have devoted themselves to keeping their languages alive and well for generations to come.

I wasn’t disappointed. In a number of conference sessions, I heard exceptional Indigenous youth speak with passion and commitment about learning their ancestral languages, reconnecting to their cultural traditions, and becoming active in language and culture revitalization. They spoke openly about the sometimes daunting challenges as well as the profound rewards of engaging in such efforts. It was clear that they all shared a deep sense of a mission that went well beyond their individual selves.

I was immediately convinced that these brave youth’s experiences should be shared widely, and decided to follow up with several of them after the conference to propose interviews in the form of written Q&A exchanges. Gisèle Martin (Tla-o-qui-aht), one of the participants in the panel discussion “Youth Involvement in Language Revitalization” along with Skil Jaadee White (Haida) and Jordan Brant (Mohawk), agreed to the interview. Here’s my illuminating exchange with Gisèle. I do hope it will be inspiring to other Indigenous youth and to anyone with an interest in language revitalization!

Luisa Maffi (LM): Please introduce yourself: your Indigenous name, if you have one; your non-Indigenous name; your tribal affiliation, lineage, etc.; your age; where you were born and where you live now; a bit about how you grew up and your life experience and activities so far; anything else you’d like to say to identify/describe yourself! 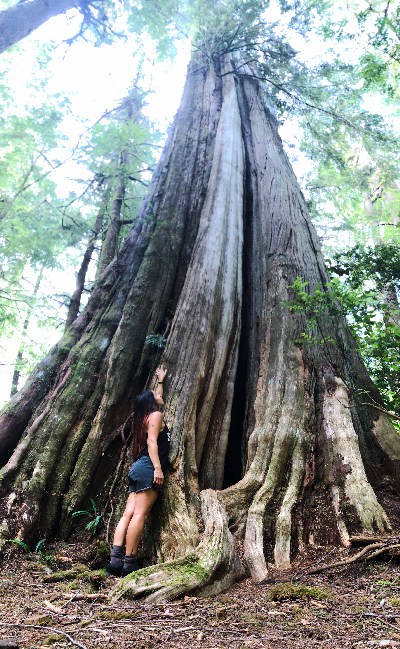 Gisèle next to an ancient cedar tree. Cedar is used for many aspects of the ƛaʔuukʷiʔatḥ (Tla-o-qui-aht) culture. Photo: Gisèle Maria Martin, 2019

There was no TV in my house growing up, but my mother always made sure I had good rain gear and spent many hours outdoors. I feel that the time outside in my formative years has shaped who I am and allowed me to better understand living with plants and animals beyond the colonial focus on names and uses. I am grateful to our Nation for declaring ƛaʔuukʷiʔatḥ / Tla-o-qui-aht Tribal Parks and for the ongoing work to protect the spirit of the land and all the living beings who belong to it and exemplify our cultural teachings.

LM: Did you grow up speaking your language, or at least hearing it spoken around you? Or, if you didn’t learn your language as a kid, when did you start learning it? What led/motivated you to start learning? Was anything or anyone particularly instrumental in your decision to learn? And how did you go about doing it (personal initiative, language apprentice program, etc.)?

GMM: I grew up speaking French and English and realized at a young age that English was neither of my parents’ real language and that one language was missing. Thinking in a different language changes your worldview and self-understanding, so I was always curious and wanting to learn about the missing ƛaʔuukʷiʔatḥ / Tla-o-qui-aht Language. 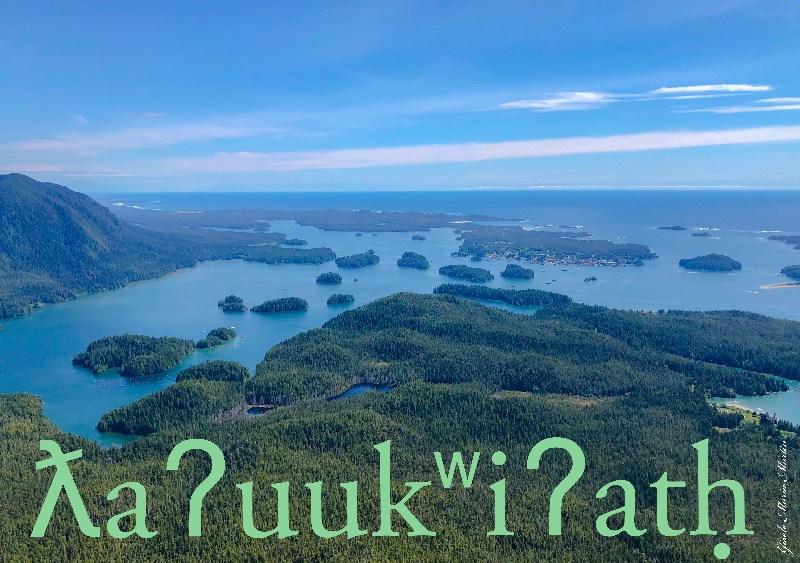 I was working in preschools with children doing a speech therapy pilot project that included culture, and they gave me inspiration to learn to pronounce sounds that I had previously thought too difficult in our language. I learned the new IPA writing system from Levi Martin, my late grandfather’s youngest brother — which makes him my other grandfather in our way, or my “great uncle” in the colonized way. And a few years after labeling everything in ƛaʔuukʷiʔatḥ / Tla-o-qui-aht language, attending any language practice groups I could find (thank you to Yuułuuʔiłʔatḥ Nation and late elder Barbara Touchie for always welcoming me in your classes!), and practicing many hours alone, I had the opportunity to participate in the First Peoples Cultural Council’s Mentor Apprentice Language Program, with Levi Martin as my mentor.

LM: What challenges and rewards have you encountered in following your language learning path? How did you cope with the stumbling blocks and frustrations that must undoubtedly have come along with it? And what has been the best thing about it for you? 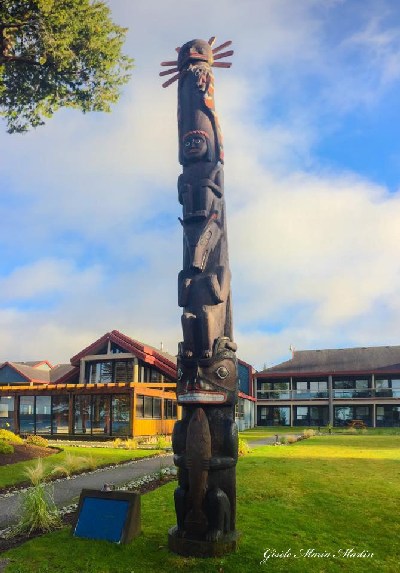 This pole, named tiičsʷiina (“we survived”) is located at Tinwis, within ƛaʔuukʷiʔatḥ (Tla-o-qui-aht) Tribal Park. It was put up for the Truth and Reconciliation Commission Recognition Celebration to remember the children who died in Indian residential schools and to honor the survivors. Photo: Gisèle Maria Martin, 2014

GMM: Learning isn’t a linear process. It rises and falls with our health and emotional well being. You can study many hours but if you force it too far, your learning can regress. It’s so important to sleep and eat well and also take time to play and enjoy life while intensely learning.

Learning ƛaʔuukʷiʔatḥ / Tla-o-qui-aht is an ongoing process, and is one of the most meaningful things I’ve ever done in my life in terms of expanding my understanding of our identity and the universe. Whatever the challenges are, our languages are worth learning.

LM: Was there any special moment or episode in this journey that you recall as a turning point, a transition — something that made you suddenly feel like “ah, I’m not turning back now”? If yes, can you please describe it?

GMM: After just beginning to understand, I attended a potlatch. It was going on late into the early hours, 4am, 5am, when kids are sleeping under chairs and the dedicated witnesses are still watching quietly. Someone began speaking in our language and I was listening. I was so sleepy that I closed my eyes for a moment and drifted off, but continued listening to them in a sort of lucid dream.

As I listened into the dream, my mind relaxed and suddenly I understood everything that was communicated so clearly. It was such a beautiful cosmic and spiritual and gentle way of communicating… Suddenly the speaker switched to English, and I gasped awake in shock, as if someone had thrown a bucket of cold water on me. I was so thrilled at having just understood for the first time, and so shocked at the hard feeling English gave, I couldn’t explain what I understood after, but it let me glimpse that fluency is possible and a very valuable endeavor.

As I listened into the dream, my mind relaxed and suddenly I understood everything that was communicated so clearly.

LM: Do you feel that learning the language has been changing how you see yourself and your place in the world, how you relate to other community members (particularly the older generations), how you connect to your people’s cultural and spiritual traditions and your traditional lands and lifeways? If yes, how so?

GMM: People used to tell me that you cannot learn a culture without its language, and I didn’t want to hear it through the despair I felt at the time about ever really learning it. But I could also see the truth in the statement. Quebec wouldn’t be the same without the French language. And now after beginning to learn our language, so much has come to light about our culture. I have said before that my previous existence feels like black and white, with a whole lot of grey areas. Learning our language is like learning to see in full color. 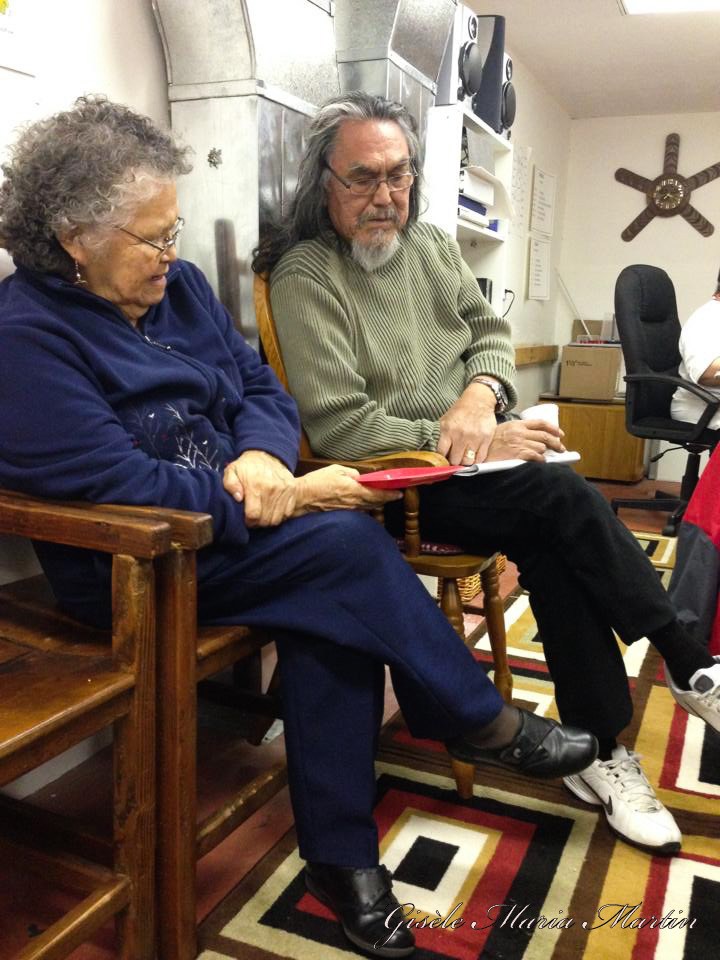 LM: Gisèle, I know that you’re also very much an environmental activist, following in the footsteps of the previous generation of your people, whose fight to protect your traditional territory in Clayoquot Sound made headlines around the world in the early 1990s. What environmental challenges are you working on these days? And do you see your environmental activism as linked to your language and culture activism? If so, how?

GMM: The damages of resource extraction, deforestation, industrial fish farming, and mining are all connected to a use-centric mentality. Many things in English are named for their uses as things to us. In ƛaʔuukʷiʔatḥ / Tla-o-qui-aht language, beings are named for what they do, what they exemplify in their life. The words we speak change how we observe, appreciate, and treat the world around us. The vitality of our languages and cultures and the health of our home territories are interconnected. Whatever we can do to help or protect one will help the other as they are interconnected. 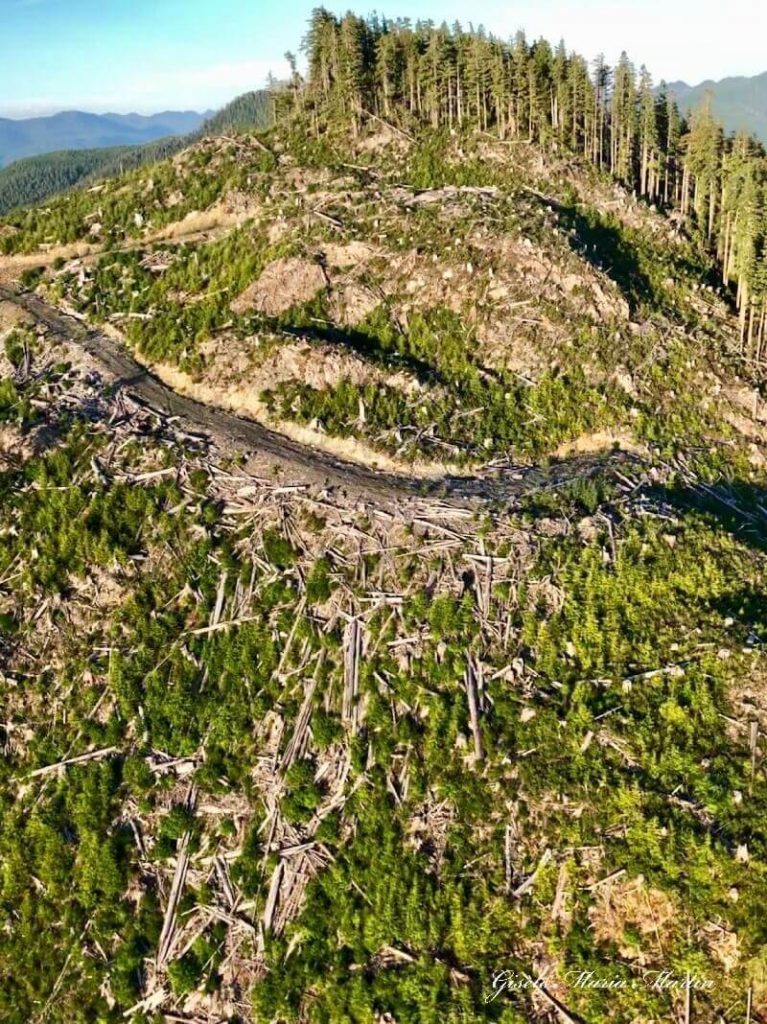 LM: What’s next for you in your journey of language revitalization and cultural affirmation?

GMM: It’s so exciting to see more learners and speakers emerging. I’d like to continue helping to get our language more prominently seen and heard within our home, including local radio, local grocery stores, and local signage, but most importantly, in small family and/or friend settings and daily moments. 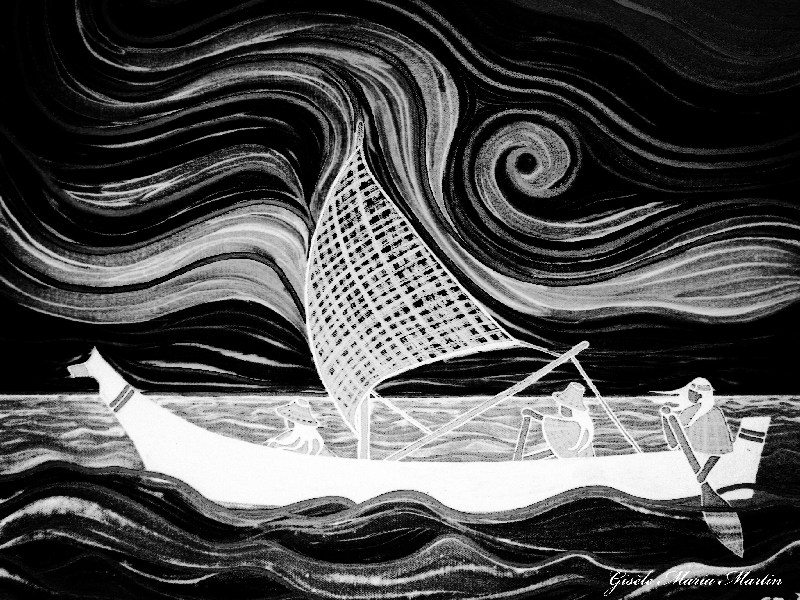 LM: Any advice for other Indigenous youth who may be thinking of learning their language?

GMM: Spend time alone outside from time to time, and don’t go too hard on yourself for not learning overnight!

Spend time alone outside from time to time, and don’t go too hard on yourself for not learning overnight!

LM: Anything else you’d like to say that we haven’t touched on? 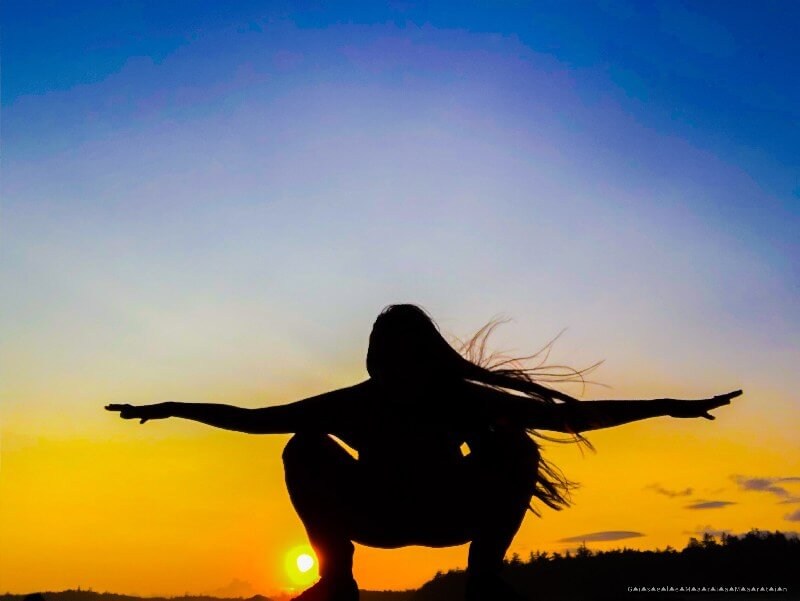 In Gisèle’s words, “Learning our language is like learning to see the world in full color.” Photo: Gisèle Maria Martin, 2018

Gisèle Maria Martin is a citizen of the Tla-o-qui-aht First Nation on the west coast of Vancouver Island. She is a Nuu-chah-nulth language and culture activist and artist. She has worked as a First Nations cultural educator and interpretive guide since 1993. Gisèle is involved in the movement to protect and continue Cultural Lifeways within her community, as well as various language revitalization efforts. Gisèle is sought after to present at conferences and international gatherings. Her reputation as an incredibly engaging orator for children, youth, and adult audiences is known far and wide..